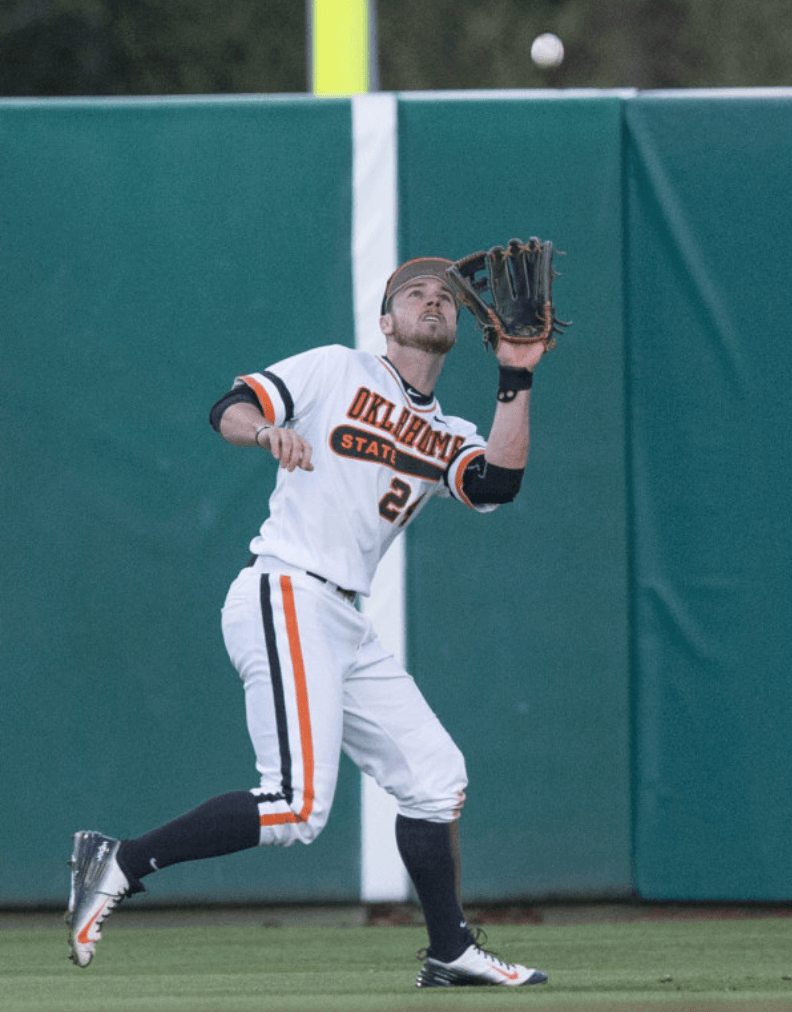 After a Longhorn sweep and a thrashing of OU, the Cowboys are gaining national attention as they put their conference series streak on the line in Lawrence.

OSU is back in the top 10 and may be the hottest team in the country right now. Almost the exact opposite can be said for the Jayhawks, who are struggling under coach Ritch Price. Last season, KU was predicted to be the worst team in the Big 12, but won 35 games and made a Regional.

This season, the Jayhawks were tied for 7th in the preseason poll – just two points above Kansas State for last – but they haven’t replicated last year’s success. KU’s nonconference schedule included road trips to LSU and two early season tournaments, while Utah, Iowa and Michigan have visited Lawrence.

Conference play hasn’t brought any change, with Price’s team losing two games in Lubbock before being swept in Norman last weekend. They did beat New Mexico twice during the week, so they won’t roll over for the Cowboys1.

Sophomore Michael Tinsley has the third-highest average in the conference (.364), along with the second-most doubles (13) and RBIs (29). He’s got six RBIs in KU’s six Big 12 games so far, so Rob Walton will have to prepare his pitching staff accordingly.

To complicate matters, KU will have to deal with the most explosive offense in the conference. The Cowboys have 10 home runs in nine conference games this season2, and for a staff that has given up 20 homers already, it’s akin to adding gasoline to fire.

As for Walton’s staff? How about the nation’s…

These two staffs couldn’t be much further apart.

Price took over in 2003 and quickly built a successful program, winning the Big 12 title in 2006 and going to an NCAA regional. The Jayhawks have only gone twice since (2009, ’14), with no conference titles to add either. College athletics has such a “what have you done for me lately” mindset, and while that may not be fair, it’s what gives Holliday the edge in this matchup.

The transition from Anderson’s last days of muddling mediocrity to Bedlam-dominating national prominence under Holliday has been nothing short of unbelievable. If I were starting a college baseball program tomorrow and needed a head coach, I know the first guy I’m calling3.

Two of three for the Pokes this weekend. Kansas is bad – borderline awful, maybe – but OSU is 3-5 in true road games this season. Although I’d say there’s a 40 percent chance the Jayhawks gets swept for the second straight weekend. Their pitching will determine if they can at least take a game from this series.

1. At least not until OSU goes for the sweep Sunday.↩

2. That’s not a typo. Texas is the next closest with five.↩

3. One interesting tidbit we might not want to think about: with the recent media scrutiny between athletic director Mike Holder and his head coaches, how is the relationship between him and Holliday? Because OSU currently has one of the most-wanted coaches in college baseball, and there are a lot of baseball programs with more money than OSU. I know this is his proverbial Yankees job, but money does talk…↩

4. Because the league only has nine members with an active baseball team (Iowa State stopped playing in 2001), one conference team sits out each week. That’s why the standings might look skewed for most of the season.↩