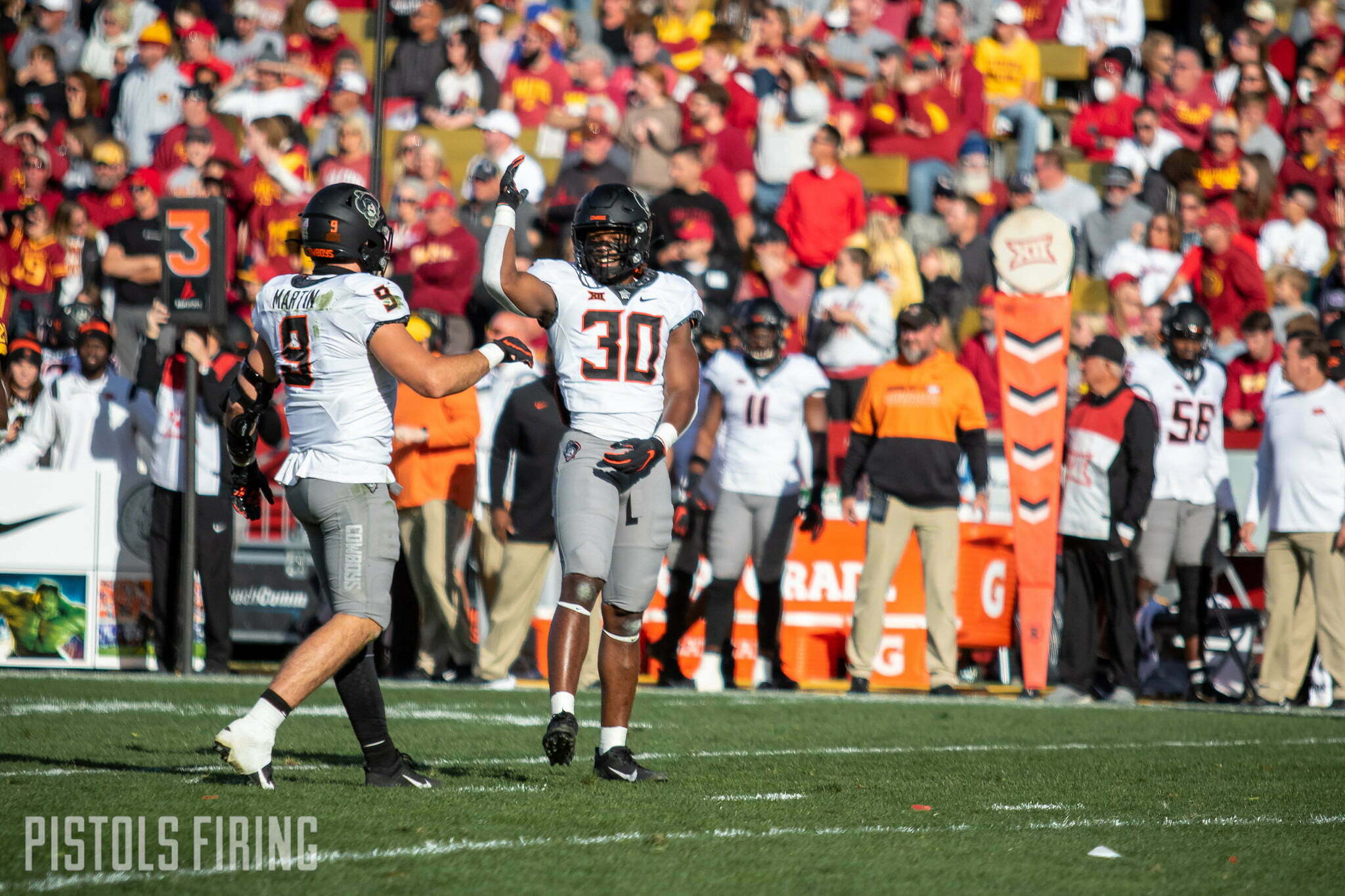 STILLWATER — In his 17th season as the Cowboys’ coach, Mike Gundy hasn’t ever had a freshman lead the team in sacks, but that could change in 2021.

Collin Oliver leads Oklahoma State with 4.5 sacks on the season, two more than redshirt seniors Devin Harper and Brock Martin. Football trenches are usually at their best when filled with experienced guys who have spend two or three years in college weight rooms. But somehow, someway, a kid who played Oklahoma high school football last season continues to stand out.

“Well, he’s freakishly athletic,” Gundy said Monday. “He’s got a very strong, flexible lower body. And he can bend, he can turn a corner and he can drop his knees, his hips and bend and get under blocks. And then he’s powerful enough to come back the other way. He just has a special athleticism that allows him to be a good football player and a good pass rusher. I mean I can’t imagine, he ought to be 20 pounds bigger and stronger next year at this time.”

Only two underclassmen have ever led a Gundy team in sacks and both were redshirt sophomores (so actually in their third year on campus). Those two were Emmanuel Ogbah in 2014 when he recorded 11 sacks and Jimmy Bean in 2013 when he got to the quarterback five times.

Ogbah is the only player in Gundy’s tenure to record double-digit sacks in a season, doing so twice. First in 2014 then in 2015 when he recorded 13 sacks en route to being a second round NFL draft pick. With at least six games to play in Oklahoma State’s season, there is a non-zero percent chance that Oliver hits double digits, again, as only a true freshman.

In his past three games, Oliver had two sacks against Baylor, one against Texas and one against Iowa State. That comes out to 1.33 sacks a game over the past three. If he could somehow continue that ridiculous run of form, Oliver would end his freshman campaign with about 12.5 sacks. It’s ludicrous. Surely offenses will start keying in on him a little more, so reaching double digits might be unlikely. But again, it’s a non-zero percentage he does.

“He’s definitely got a lot of speed on the outside,” OSU offensive lineman Jake Springfield said. “I’ve seen him get some guys doing that, then doing the up-and-under. He’s also really powerful for his size. He’ll kind of surprise some guys earlier in the game.”

To further show just how unique the numbers Oliver is putting up are, here are some of Gundy’s all-time great pass-rushers and what they did as freshmen. Sure, this isn’t necessarily an apples-to-apples comparison, spanning different defensive coordinators and different personnel situations, but it shows just what kind of start Oliver is off to.

Rodney Harding holds OSU’s freshman sack record with 9.0, which he set in 1981. Again, that’s well within Oliver’s reach with how his past few games have gone.

Oliver will forever be linked with Trace Ford and Calvin Bundage, as they came from the same high school. Ford’s 2019 freshman season was also ridiculous. To go with his three sacks, Ford had 29 total tackles, an interception, five pass breakups and a forced fumble. Ford’s three sacks that season came in 206 pass rush snaps, according to Pro Football Focus. Oliver’s 4.5 sacks to this point have come in just 117 pass rush snaps. Those two could come off opposite edges next season.

Gundy has often talked of this wall freshmen will hit at some point in the season. He said it usually comes about November, but Monday he added that with how deep OSU is defensively, Oliver might be more fresh than most freshmen.