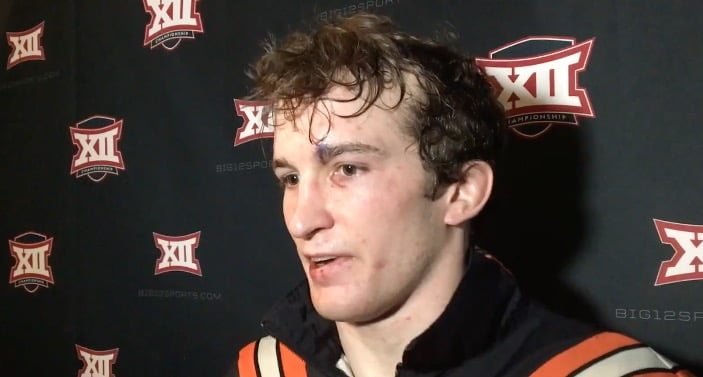 TULSA, Okla. — As Oklahoma State’s Preston Weigel dived at West Virginia’s Jacob Smith in the 197-pound title bout, he locked in his cradle perfectly and pinned him. It was exciting, but it was also representative of the weekend.

The Oklahoma State wrestling team pseudo-hosted a dual meet with the remaining Big 12 All-Stars in Tulsa’s BOK Center on Saturday and Sunday for what the conference called the “Big 12 Wrestling Championships.” Through the two days, OSU took 28-of-30 matches, won eight title bouts, posted 176.5 points and left as 83-point victors.

Each of those four stats either tied or set Big 12 records, which is great. But the Cowboys had locked up their 51st conference title after Day 1, so Day 2 was about 10 matches that, while they may have meant something to the individuals, had no impact on the outcome. Just business as usual, sophomore 159-pounder Joe Smith said.

“Some of us have been together for two years, and some of us have been together for four or five years with guys from my high school team like Kaid Brock and Chandler Rogers,” Smith said. “And we’ve always had that mentality. We want to be the best, and so it’s not over yet, and I think that’s why we keep that mentality is because we haven’t done it yet.

“Yeah, we made history here today with 10 finalists, which is great. I’m super happy, and I think it’s really just a motivator to let us know that we’re right there with the rest of the country.”

There were a ton of storylines from the finals. Senior Kyle Crutchmer won his final Big 12 match in his hometown. Nolan Boyd returned from his pinning loss against Penn State with a conference crown. Austin Schafer stood atop the podium in his only opportunity, but none could top the significance of the formality of it all.

Anthony Collica won his Big 12 title Sunday against Bedlam rival Davion Jeffries via a 7-4 decision. He said he is happy with how the team is wrestling. He didn’t seem to preoccupy himself though with the bloody lip or stitched eyebrow he got in Tulsa or the fact that it was his fourth conference championship.

“Yeah, all the same,” Collica said. “Just getting you ready for nationals.”

Smith was the only Cowboy wrestler who popped a smile as he was given his weight class’s completed bracket and first-place medal, and the only reason he did was because he saw someone in the crowd.

That’s the nature of OSU wrestling. There is more to be won.

“We knew coming in we were heavy favorites, but doing that is a different story,” coach John Smith said. “I saw a lot of things in the final matches that I didn’t like.”

The Big 12 isn’t a bad wrestling conference. It receives the third most automatic bids into the NCAA Championships. With affiliate additions to the conference such as North and South Dakota State, the Big 12 is about as deep as it has ever been, Smith said.

OSU’s 133-pounder Kaid Brock was one of the Cowboys’ two losses in the tournament. South Dakota State’s Seth Gross beat him 9-7 in a screamer of a match. Gross was named the weekend’s most outstanding wrestler, though OSU won titles in eight other classes. Again, probably just a formality.

But still, about an hour later, Brock was in line like the rest of his teammates with a smile on his face waiting to hoist the Big 12 trophy and drive back to Stillwater.

There isn’t anything the conference can do about it, either. There just aren’t any teams willing to relocate conferences that will come in and compete at the top immediately. Still, Big 12 wrestling is good. Smith said it’s just hitting stride.

“It’s gonna get better,” Smith said. “This conference is gonna be tough. It’s gonna be very competitive in the future. I know it. I see it. I see it in the recruiting classes these guys are getting. It’s still in a position to maybe continue to grow with teams.”

Smith said his view of adding more teams has “no doubt” helped the Big 12, and he is right. No doubt.

But OSU wrestling is omnipotent compared to the rest.

So the Cowboys won their matches, stood on their podium, shook hands, received their medals and talked with media as they were instructed.

Although the screaming fans in the BOK stands were excited, the wrestlers resembled Tom Brady after winning his umpteenth AFC East title.

That’s good though. Because that means there is more to come.

“On Day 2 with 10 guys in the finals I hoped to get as many champs up there as possible,” reigning national champ Dean Heil said. “And with the way that we’re performing if we continue that into nationals, we definitely have a shot at winning a title.”