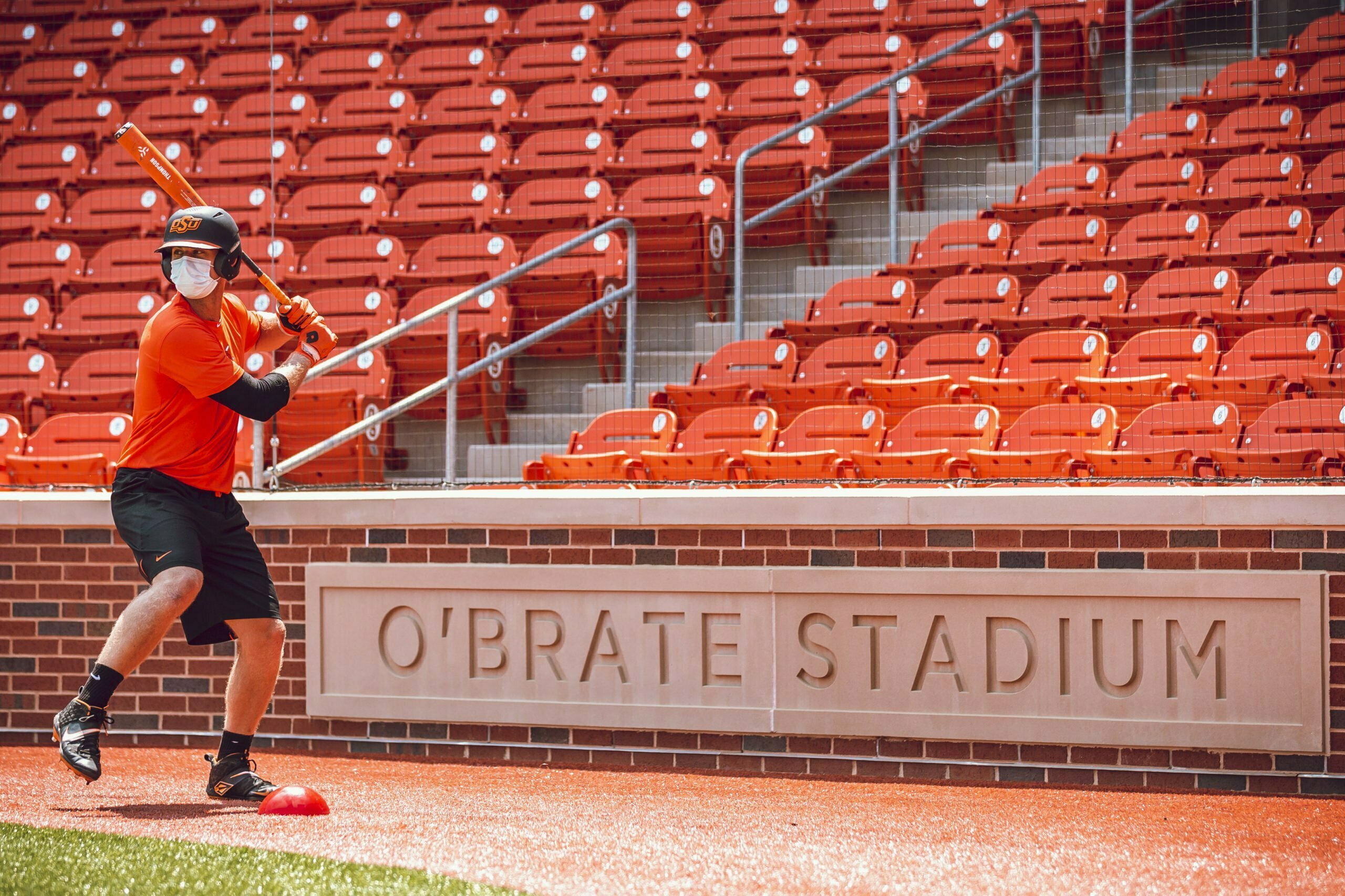 STILLWATER — People everywhere have been told they need to distance themselves from one another, and there might not be a better place to socially distance than a new $60-million ballpark.

The Oklahoma State baseball team has been in the new O’Brate Stadium for about two weeks now after March’s cancellations put off the park’s opening day to the 2021 season. But by all accounts, the new stadium has been worth the wait.

“The design is fabulous,” OSU coach Josh Holliday told PFB. “It’s an unbelievable place to come to work. It just puts you in a great mood the minute you pull up. … I think probably the thing that stands out most is when you’re actually on the field and the sound system is on … the stadium has incredible sound. It has incredible sights. The grass is perfect. Every time a ball is batted, it’s fun to see where it lands. The sound of the stadium when the ball hits the bat, it’s just a totally different place, and it’s really special.

“Every day we get to play catch and hit a ball and field a ground or watch a kid chase a ball down, whatever it is, it’s really thrilling. The first time the ball hit the scoreboard, it was fun to see a ball hit that far. The first ball hit over the batter’s eye in center field, you just see all these firsts and can kinda see the kids’ faces light up with joy. Every day is a new day. You enjoy the heck out of it.”

Alix Garcia was the first player to hit the scoreboard. It didn’t  break, as Holliday joked “I think it’s designed to take a hit and keep on ticking.” There are a lot of firsts going on. First meetings, first batting practice sessions and of course, the first pitch.

Stadium namesake and donor Cecil O’Brate and his wife Frances made the trip to Stillwater to cut the ribbon and toss out a pitch to open the new facility in a private event because of COVID restrictions.

A special night of celebration at the ballpark. Forever indebted to Cecil & Frances O’Brate for their generosity to #MakeItHappen. Couldn’t be prouder of our new home #GoPokes #okstate pic.twitter.com/Ohiffdau7T

“It was really cool,” senior outfielder Cade Cabbiness told PFB. “It was something that we didn’t get to do last year, obviously, because the season got cut short right before that was supposed to happen. But it was nice to see Mr. O’Brate and his wife and listen to them talk and hear about their journey. I’m glad it’s us that’s able to benefit from their success.”

Cabbinness was responsible for a first of his own in the park: he was the first one to send a ball all the way out of the ballpark, past the concourse in right field.

“I did hit a couple balls really well out there,” Cabbiness said. “Just normal batting practice, little bit of excitement because it was everyone’s first time to hit out there. It flies like it does at Allie P.”

In watching the bits of batting practice and workouts on the new field, Holliday said it looks as if OSU’s new park will play like its old one. Holliday said on a warm spring afternoon with a breeze from the south, games could get high scoring. In some of the colder months early in the season, though, it might take a team stealing second and hitting a ball to a gap. Holliday said the park should favor well-rounded ball clubs.

The delay to the stadium’s opening was a definite disappointment, but it gives the Pokes more time to get used to all the amenities their new ballpark provides without having to worry about moving in midseason.

“You can certainly kind of figure out as you go along now without the pressure of the season hanging over your shoulders,” Holliday said. “Obviously every day you come here, you discover things that you can do and some things that you need to kind of really train your group on how to take care of an elite facility the right way, to come and go, how to maximize the benefit of the facility. So yeah, it’s kinda good to be able to go through it now when we don’t have games hanging over our shoulders. And for everybody involved, we don’t have 8,000 to 10,000 people coming and going in and out of the facility. So there was some extra time provided to finish up some little things and provide us a chance to really form an operating system here.

“It’s been fantastic. I definitely think heading into a competitive season in the spring of 2021, we’ll be much more comfortable and much more united in how we arrive and how we prepare and compete here.”

The delay also didn’t keep the Cowboys’ 2020 squad from experiencing the new stadium. With the NCAA’s ruling to extend spring sports athletes’ eligibility, seniors from the Pokes’ 2020 squad, like Cabbiness, are able to rejoin the Cowboys in 2020.

Cabbiness didn’t want his extra year to go to waste, so he turned what would’ve been his minor into a second major. In May, Cabbiness will graduate with degrees in marketing and sports management.

“It’s like everyone there is getting to start at some place new,” Cabbiness said. “It’s like if you and all your friends went to the same school and then you all went to another place. It’s you, your coaches, everyone, and you all just picked up and went over somewhere that’s a little bit bigger and nicer and picked back up where you left off.”

Cabbiness said he doesn’t like talking lesser about Allie P., as some of his best memories were spent there, but he did add that it’s “hard to not like O’Brate more.”

That’s what Holliday and his staff will hope prospective student-athletes will think about O’Brate. Recruiting is as different as it’s ever been with prospects not able to physically visit campus and coaches not able to physically visit prospects. So, recruiting in the COVID-19 era is being done through pictures and videos, and luckily OSU has a nice new ballpark to shoot.

“Do I think it’ll really resonate with people when they come visit? I hope when we get back to that time that it sure does,” Holliday said. “I can’t wait to welcome a kid to campus for the first time and be standing here in my office, which I’ve never had the chance to do just yet. I think it’s gonna be a game-changer for us.”

With how slow the weeks have gone since the pandemic started, it feels like the 2021 baseball season is decades away, but in about five months a real pitch will finally head toward the plate in O’Brate Stadium and a new era in Cowboy baseball will begin.