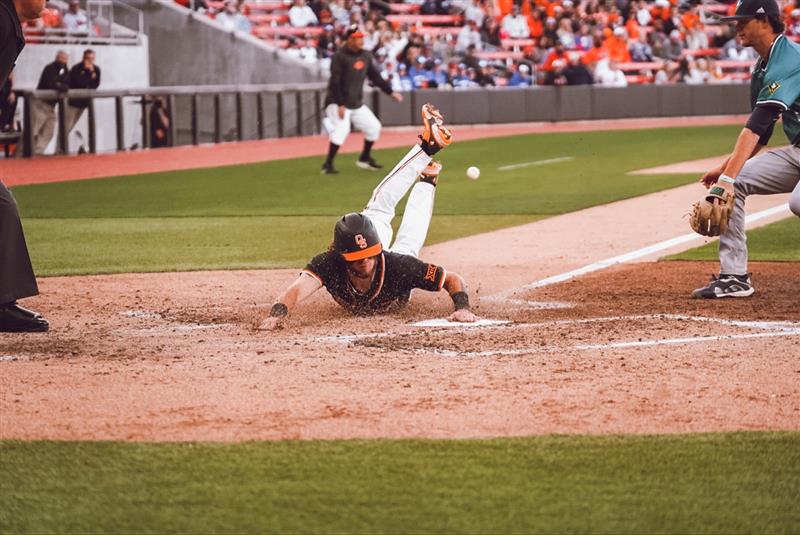 Make it 20 wins for the Pokes.

In Game 1, the Cowboys built their 7-0 lead off multiple-RBI performances from Max Hewitt, Christian Encarnacion-Strand and Carson McCusker, but OSU almost fell apart in the ninth, where UNC-Wilmington scored five runs before Brett Standlee closed the door.

Game 2 was a less stressful outing for the Cowboy faithful, with the Cowboys in charge from start to finish.

The two teams finish their three-game series at 2 p.m. Sunday. Here are a few takeaways from Saturday’s games.

The pair combined to go 6-for-12 on the day with seven RBIs and three home runs.

Cabbiness drew a trio of walks in Game 1 before going 2-for-4 with four RBIs in Game 2.

He started the second game with a two-run home run to right-center field. It was his third home run of the season.

The Bixby grad also put on quite the show in right field, something that is becoming a normal thing.

Cabbiness’ home run scored McCusker, who tripled in the at-bat before. At 6-foot-8, McCusker only needs about three or four steps between bases.

Here is his round-tripper in Game 1.

And in the seventh inning in Game 2, McCusker put it over the batter’s eye in center field.

McCusker missed OSU’s first 19 games with a back injury, but since returning, he has played nine games where he is hitting .353 with 11 RBIs, eight runs scored and the three home runs.

Cabbiness has had his struggles at the plate throughout his career, but in his past four games, Cabbiness is 7-for-14 (.500) with three runs scored and seven RBIs.

“They both do a lot of very good things on the field,” OSU coach Josh Holliday said. “They’re true Cowboys. They’re special kids.

“… They’re pillars of our team, and they stand for everything that’s good about what we do.”

Justin Campbell Is His Own DH

Oftentimes Josh Holliday will list a pitcher as a designated hitter in his starting lineup before switching in an actual hitter before the at-bat. That didn’t happen in Game 2.

After being OSU’s DH in Game 1, Justin Campbell started Game 2 on the mound, and he was the Cowboys’ “designated hitter” again.

Earlier this week Campbell was named to the watch list for the Olerud Award, given to the nation’s best two-way player.

On the mound Saturday, Campbell threw six innings, allowing three runs off five hits while striking out six and walking two. At the plate, he went a combined 1-for-6 on the day with one run scored and one RBI.

On the year, he has a 1.15 ERA in 39 innings of work. It’s the Cowboys’ lowest ERA among pitchers who have thrown at least nine innings. He is hitting .265 with four RBIs and eight runs scored.

“It’s a tough decision [to have a pitcher hit] because pitchers have demand placed on their legs and their focus and their bodies,” Holliday said. “Justin is good at both. Looking at the matchups today, and our available players based on health, I really felt like a left-handed hitter was needed in that spot that he held in both games.”