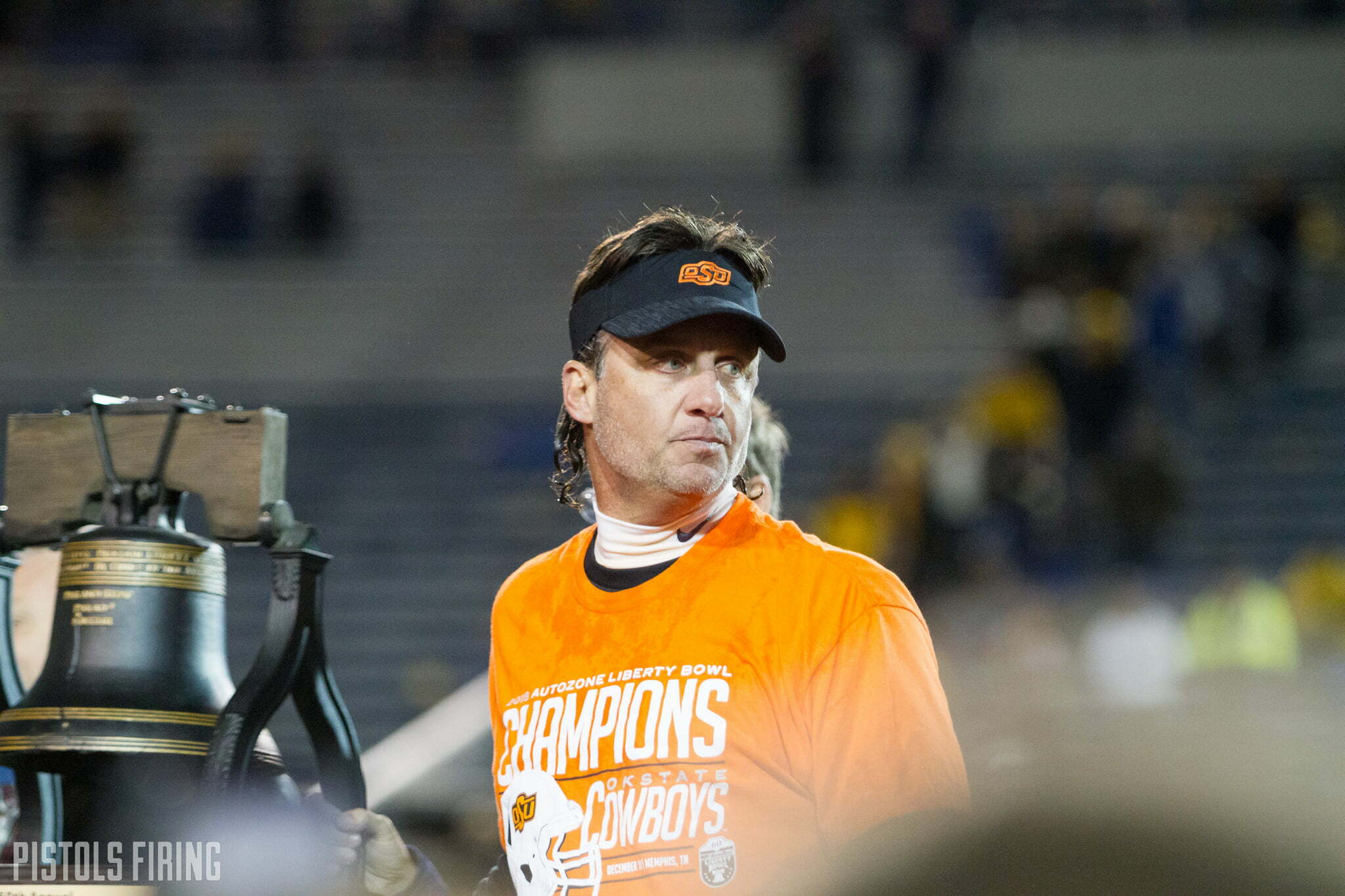 Spring football is right around the corner and what happens starting next month — and over the next couple of months and into the summer — will have a huge longterm effect on Oklahoma State’s football program.

Mike Gundy had his down year in 2018. He’s allowed one every four to five years or so, but how will he go about avoiding the first two-year rough stretch in his career? Let’s look at that and four other storylines to keep an eye on this offseason.

Tyron Johnson may have not been the transcendent player that some of us envisioned he would, but he was plenty talented and was, at times, a game-changer. Tylan Wallace can be penciled in as OSU’s top receiver, but who will fill Tyron’s role to keep opposing secondaries honest?

OSU has boasted some of its most dangerous passing attacks in years when it lined up pros opposite pros. See Marcell Ateman to James Washington, Josh Cooper to Justin Blackmon, and now the departed ? man opposite Superman.

Who will step up next year and be the Cowboys’ second option beside Tylan? The good news is that there are a slew of talented candidates to choose from. I’m keeping an eye on former NEO transfer Patrick McKaufman who missed last year with a torn ACL. Once healthy, the 6-6 walking mismatch should make plenty an opposing DC nervous. Also receiving votes: Braydon Johnson, CJ Moore, Landon Wolf, LC Greenwood.

A somewhat underrated storyline for Oklahoma State is how it will replace the top two RBs in its depth chart from the start of last season. Justice Hill was one of the all-time rushers to ever come through Stillwater, but his replacement is all but set in Chuba Hubbard.

His backup, J.D. King, saw his carries dwindle as Chuba took the reins of RB2, but he was the clear RB2 heading into 2018 and was a talented bruiser in his own right. If nothing else, OSU’s depth at its most physical position took a hit.

Those departures could open up carries for, Deondrick Glass, OSU’s highest-rated freshman tailback since Devon Thomas, to make an immediate impact.

Glass won’t be in Stillwater until the summer and junior college transfer Dezmon Jackson is getting a head start this spring, but with his talent and apparently college-ready body I think it will be hard to keep Glass off the field. We’ll definitely keep an ear to the ground come summer workouts.

3. Which coordinator will have the better offseason?

This one will be impossible to truly know (from the outside looking in) until this fall, but both OSU’s first-year OC and its second-year DC have a lot to prove in 2019 — and that process has already begun.

From a recruiting angle, Sean Gleeson did not get the chance to put his fingerprints on OSU’s 2019 class, but Jim Knowles helped land in-state DE Trace Ford and will get the credit for helping bring in Colorado transfer Israel Antwine, another Oklahoma product who was at one time an OSU commit.

But when it comes to development and relaying their schemes to their players, both coaches have their work cut out for them this spring and into fall camp. Knowles’ defense needs to take a decent-sized step forward in Year 2, and that will be a tall task with the turnover he’s facing along the defensive line — though I think his secondary will be much improved with plenty of talent and experience returning.

On the offensive side of the ball, Sean Gleeson has all the tools to succeed in talented group of playmakers surrounding no less than two potential franchise QBs in Spencer Sanders and Brendon Costello, as well as a seasoned vet in Dru Brown. His offensive philosophy should read something like “Get Chuba or Tylan the ball in space and let them do Chuba and Tylan things.”

There will be growing pains and replacements to work in along the offensive line, but with the track record of Gundy-coached offenses and it being his first year, a successful 2019 for Gleeson is probably one in which he’s not at the forefront of OSU talk.

4. How much of a competition is the QB race?

You’ll notice that I didn’t say “how aloof will Mike Gundy be about the QB race.” While the head man likes to keep his quarterback chatter close to the vest, I think for the direction of the program — and the sanity of the fanbase — we’ll need to know something about who the leader in the clubhouse is early in fall camp, if not before. And that leader had better be Spencer Sanders.

Dru Brown may be a suitable candidate, and would have been an understandable pick to spell Taylor Cornelius in 2018 with Sanders being a true freshman that didn’t show up until summer. But in 2019, Brown offers only one year of eligibility and would be taking snaps and tenure from your supposed future leader of the program.

If Sanders hasn’t rapped this thing up by the first couple of weeks in the fall, then OSU has swung and missed big. And if he has, then give him the confidence that you allotted and fifth-year stand-in who you declared “the guy” last July at Big 12 Media Days and rode to mediocre finish.

This is technically an onseason storyline but the way he and his team approaches the spring, summer and fall camp will have an effect on Mike Gundy’s legacy at OSU. Does that mean he’s not the school’s best coach if OSU goes 8-5? No, but in college football you are either getting better or you are getting worse, and another subpar year would indicate the first downward trend of his career.

Following his team’s Liberty Bowl win, Gundy said that he was more excited than ever to coach at OSU. But detractors will point to a rolling big $$$ contract and his perceived lack of urgency on the recruiting trail — and that seven-win season — and draw conclusions, fair or not. Follow that up with a similarly disappointing year and those detractors will multiply and that notion will pick up speed.

Of course, things aren’t so cut and dry. Nothing is quite as simple as we try to make it. There is nuance and outside factors that often get glossed over in lieu of results. But the optics aren’t good, and could get worse.

Like it or not, Oklahoma State’s football program will always be measured against its in-state rival. For its part, Oklahoma might have somehow upgraded the winningest head coach in Big 12 history when Bob Stoops stepped down, and with each ? that Lincoln Riley tweets out, it appears the Sooners’ grip on the league is only tightening.

How OSU answers in 2019 will go a long way in determining if it takes a step forward or gets lost in the pack of second- to third-tier Big 12 programs.