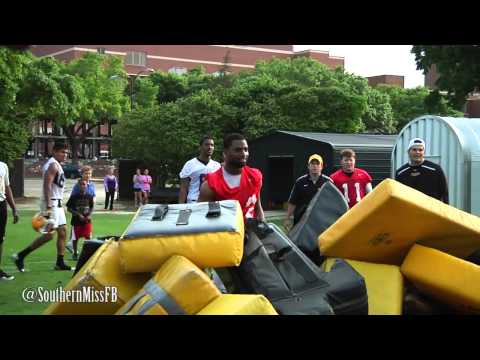 Not trying to be Debbie Downer here but on the defense: I’ll believe it when I see it. (NewsOK)

This is a real quote from a real OSU player: They could just draw something out of a bucket of who quarterback we’re going to start. (AP)

Gundy on the D: I just want to be more aggressive on defense and I don’t necessarily mean blitzing. But over the last couple years I haven’t been happy with the way we approach the game on defense and the way that we defended the passing game. (AP)

I would say we would miss Randle too, but I also thought we’d miss Bell, Morency, and Kendall. And I was wrong every time. (Scout)

I kind of fall asleep in practice now. (Tulsa World)

Good point by Jenni (I know…) here, OSU is going to be picked to win the Big 12 title without a starting QB. (NewsOK)

We got a recruit from Oklahoma! (ESPN Insider)

I’m not concerned any at all about our offense. The spring cotillion was just a smorgasbord of quotes on Saturday, wasn’t it? (NewsOK)

I would actually say OSU’s QB production is a sure thing, we just don’t know who yet. (Tulsa World)

I thought we weren’t allowed to call it the spring game? (O’Colly)

Is it a necessary evil? I call BS, we’re not going to war. (Tulsa World)

Poor Wes Lunt, he’s never going to get to talk to the media. (NewsOK)

Wait…Justin Gilbert got caught from behind on Saturday? (NewsOK)

Des Roland: My freshman year, I would go to practice just to get it over with. Now, I’m looking forward to practice every day. I know my assignments. I’m running harder and thinking smarter. (Scout)

Gundy on Gilbert: Justin played very average last year, and he would be the first to admit that. He’s certainly very talented, and he was in position to make plays today, and that’s what he needs to do for us. He needs to be a guy who has several interceptions and runs the ball back. (okstate)

His hair could match his uniform next year? (Scout)

Bill Self setting himself up to end Travis Ford’s career in Stillwater. He’s going to be at “could be best Big 12 team of all time” by October. Obscene statements when conference starts. (NewsOK)

James Anderson in for the Rockets. #OKstate guy.

So far Kip Smith has been the best K/P, by far. But this race won't be settled until incoming frosh Ben Grogan arrives. #OKState