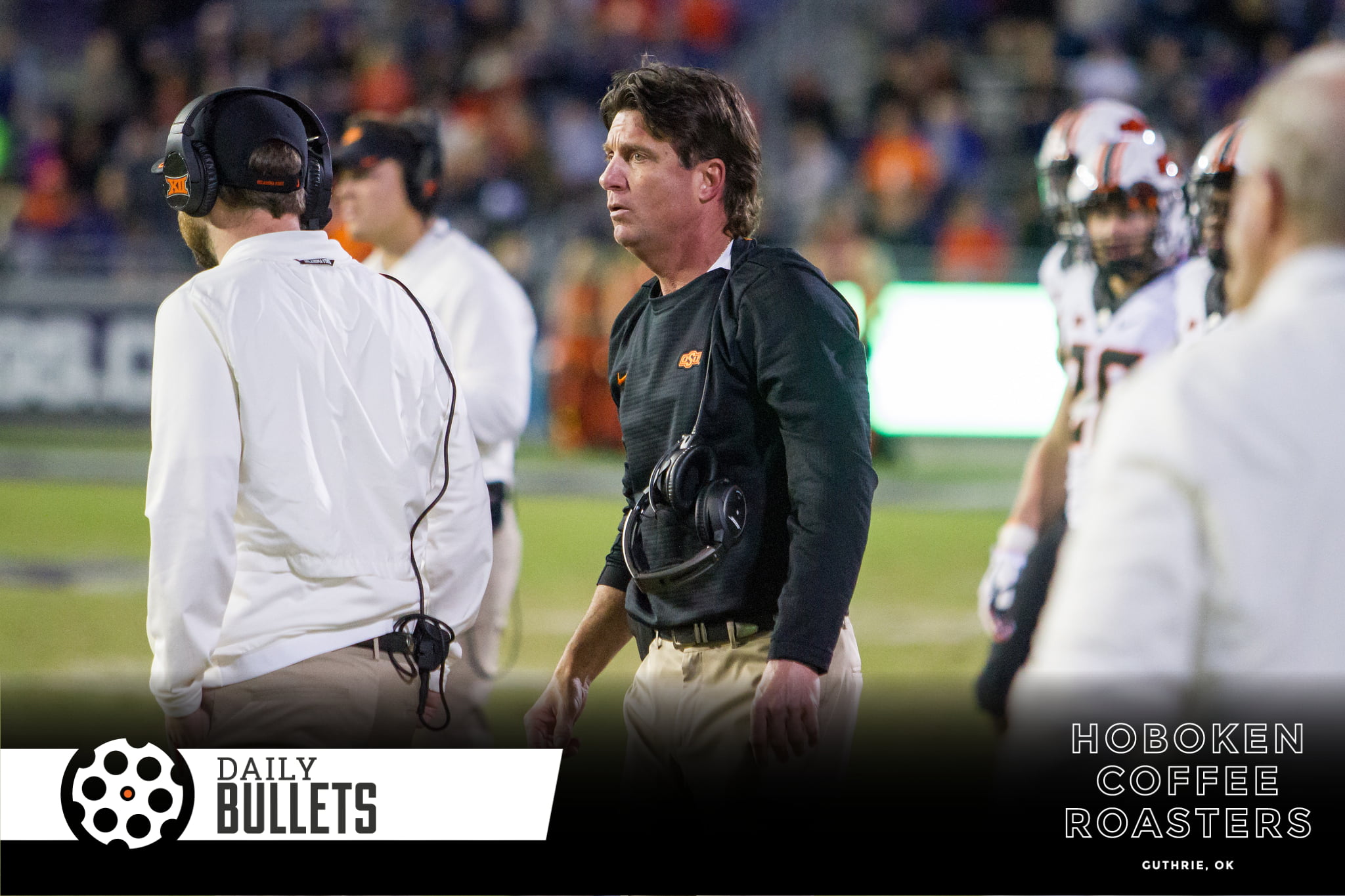 Assuming Justice is headed towards day two or three, feel free to join me in pulling for this Tulsa running back (and his touching story) to go early.

• Mike Gundy riffs on the woes and joys of the college football transfer portal.

“It’s religion, politics and the portal,” Gundy said when asked about the pros and cons of the portal. “I don’t even think it’s worth commenting on, because you’re gonna get such a mixed reaction from people.

“I don’t think anybody knew the direction it was going when it was put in place. I think it’s a dangerous thing. I think there are a few things that are positive, but I think the majority of it is danger unless the NCAA changes the opportunity for coaches to manage roster numbers.” [NewsOK]

I have to believe some accurate forecasting was done when the portal was being discussed: 18-year-olds will behave like 18-year-olds and will list their names on the portal to see if they’ve got better options. Just think about it – after going through the high of being recruited by football programs, they find themselves 18 months later not in the position they hoped they’d be in. Put your name on the portal and your being recruited again hoping for a better situation.

Gundy can and should be beating the drum for reform around scholarship limitations – if you have ten transfers is it fair that you can only take 25 in the next class? Probably not. Quit wasting time saying you’ve opened Pandora’s box from the angle that it’s not good for everybody when players have these options.

In reality, I think Les Miles nailed it with 50 fewer words:

• As spring ball wraps up, certain narratives are emerging and crystallizing as must-watches for the fall. One is certainly former four-star wide receiver C.J. Moore and how much of a shot he will get at a supporting role this fall.

I just thought it was interesting to hear Gundy talk about Moore playing fewer than 55 offensive plays because it didn’t seem like that many. But when you note that 55 plays is over 70 percent of what Oklahoma State runs on offense and start to look around at how often receivers in similar offenses are out there, it makes more sense. [PFB]

When Gundy mentions being limited to 55 plays – seeing somewhere between 70 and 80 percent of offensive snaps is hardly a restrictive pitch count. You could make an argument that it’s closer to starter-level snaps or at-worst the first receiver off the bench.

• I’ll just be reporting the news here and not offering much of the usual commentary – Tyreek Hill won’t face charges on recent child abuse complaints.

“We believe that a crime occurred,” Howe said. “However, the evidence in this case does not conclusively establish who committed the crime against this child … We feel we’re at an impasse at this point, and any further investigation would be unnecessary or unwarranted.

“Like a lot of crimes, it’s a ‘whodunnit.’ And in many times with child cases, the children can’t necessarily speak for themselves. So that becomes a very difficult situation.” [Yahoo Sports]

Acknowledging that I am not omniscient and that by our system, the best I understand there is in the world, a person is innocent until proven guilty. With that being said, I sincerely hope there are avenues for a child to be checked on regularly in what could be considered an at-risk home given historical context.

• Don’t expect the NCAA to start digging into corruption around football after this week’s allegations.

• I don’t love this Myles Slusher-to-Oregon prediction but I like the Pokes potentially landing a safety soon.

• Cowboy alum Corey Williams has landed closer to home – named an assistant at the U of A.

• How the ‘Ikea Effect’ impacts how you spend