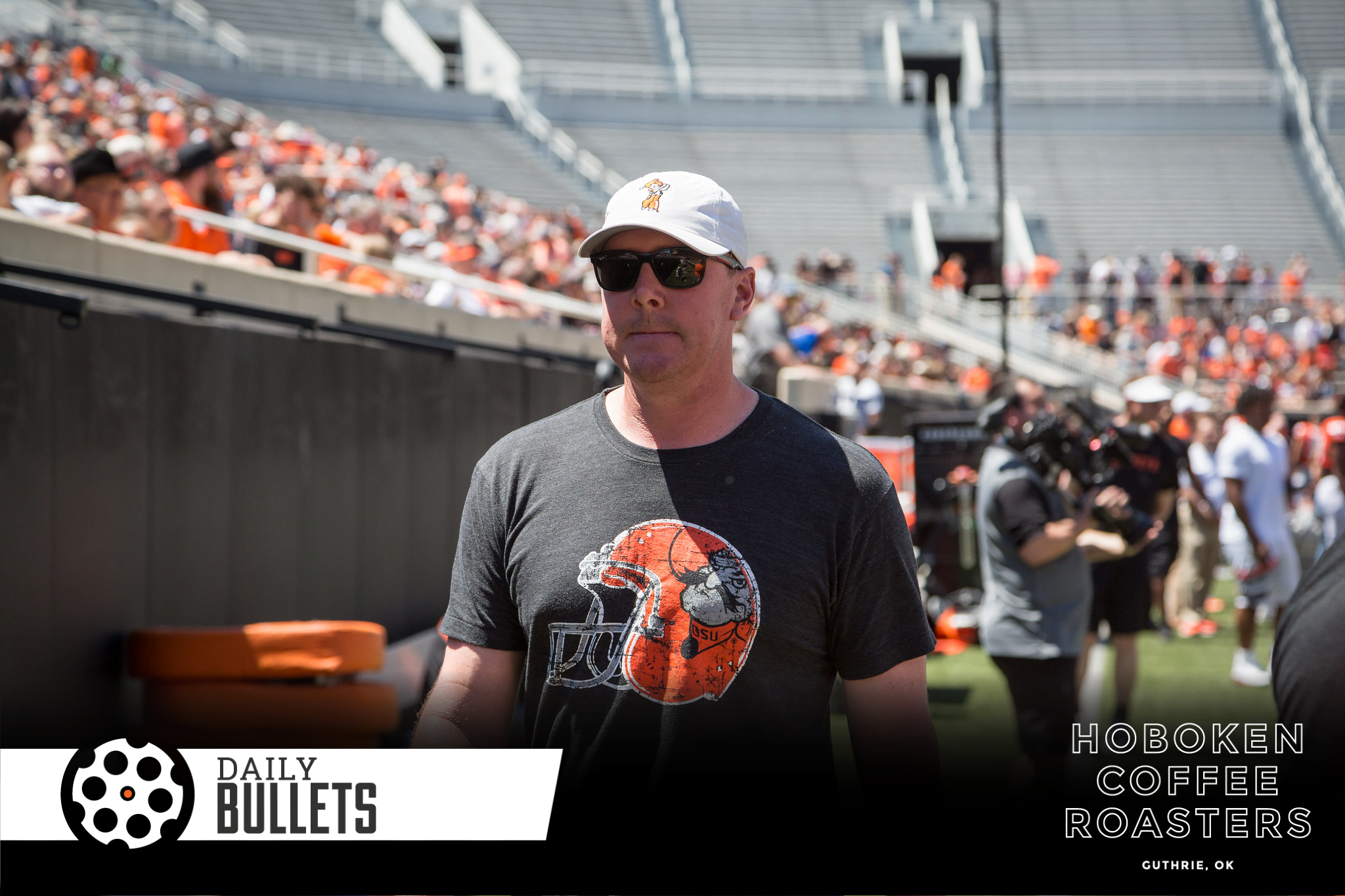 I have been overwhelmed by the response to both our forum and our PFB+ subscription. Unreal numbers on both sides. You can learn more here (and pssst … there are a few 50% off subs left).

• The entire Bill Haisten-Brandon Weeden interview is as good as you would think. He riffs on 2011, Dana and what’s next. Here’s one of the better pieces of it.

Weeden expressed an opinion that the 2011 Cowboys, denied the opportunity to face LSU in the BCS Championship game, were the best team in the country. “I don’t think there was a defense that could have stopped us,” he said. “It’s a shame we couldn’t find out. LSU had a lot of NFL players, but our 2011 team was special.” [Tulsa World]

• Rudolph and Washington had a good preseason game with the Steels against the Chiefs. This site is the PFB version of Pittsburgh sports coverage, and had a good breakdown of the game.

Rudolph was 10 of 15 for 77 yards and led one touchdown drive. It also was telling the coaching staff put him in there with all of the starters — save Maurkice Pouncey and David DeCastro. They wanted to get a look at whether he could move the ball with that unit. Rudolph passed that test. It wasn’t always pretty. But there were a couple of dropped passes that could have led to better numbers.

“We were comfortable. There were some miscues here and there, self-inflicted, but I thought we moved the ball well,” Rudolph said. “It just feels good to get in there with JuJu (Smith-Schuster), (Donte) Moncrief and James (Washington) and the o-line. It was a new group to gel with.” [DK Pittsburgh Sports]

• If you’re not a believer in Washington after this game, I don’t know what to say to you. He had another four catches for 78 yards and also had a tackle on kickoff coverage. The young man can play. [DK Pittsburgh Sports]

• Cool story here about walk-on-turned-scholarship-player Logan Carter by Scott Wright. Here’s the turning point when Carter was trying to choose a college and walking through the decision with his mom.

He arrived at OSU in 2016 and redshirted, then became a special teams player the next season. As a redshirt sophomore last year, he played in all 13 games, caught a touchdown pass in the upset of West Virginia and received OSU’s Walk-On Award given to the team’s outstanding non-scholarship player. [Oklahoman]

• Hey, we had a really good time with this pod, and I’m proud of the product we’ve created. If you’re not a subscriber, you should be!

• RA grades out the positions from fall camp and previews what guys might do this season.

• OSU with the 60th-best QB situation in the country? Ok.

• Mike Gundy has no idea what kind of season Mike Scott is going to have.

• Kids that weren’t born when Tiger won Pebble are going to school at OSU now.

We are Cowboys! We finish what we start. We have a passion to do what's right, even when it's hard. We stand for what matters, even if we stand alone. We dream as big as the sky. And we end the day knowing we gave it everything we had. #okstate #okstate23 🌅🌟 pic.twitter.com/gbZC6lg9Ct

• When that new PFB Pod hits.

His talent was apparent coming out of Oklahoma St. and he looks to continue that in the NFL. #RavensFlock

• This video will mess you up.

• Barack Obama’s summer reading list (sorry in advance to those of you who feel like this is a nuanced and possibly emphatic political statement … it’s not).

• This on leadership is excellent.

• This is long and faith-based, but I have returned to it on power and leadership multiple times over the last two years.

• Here for this take that the Popeye’s chicken sandwich is better than the Chick-fil-A one.