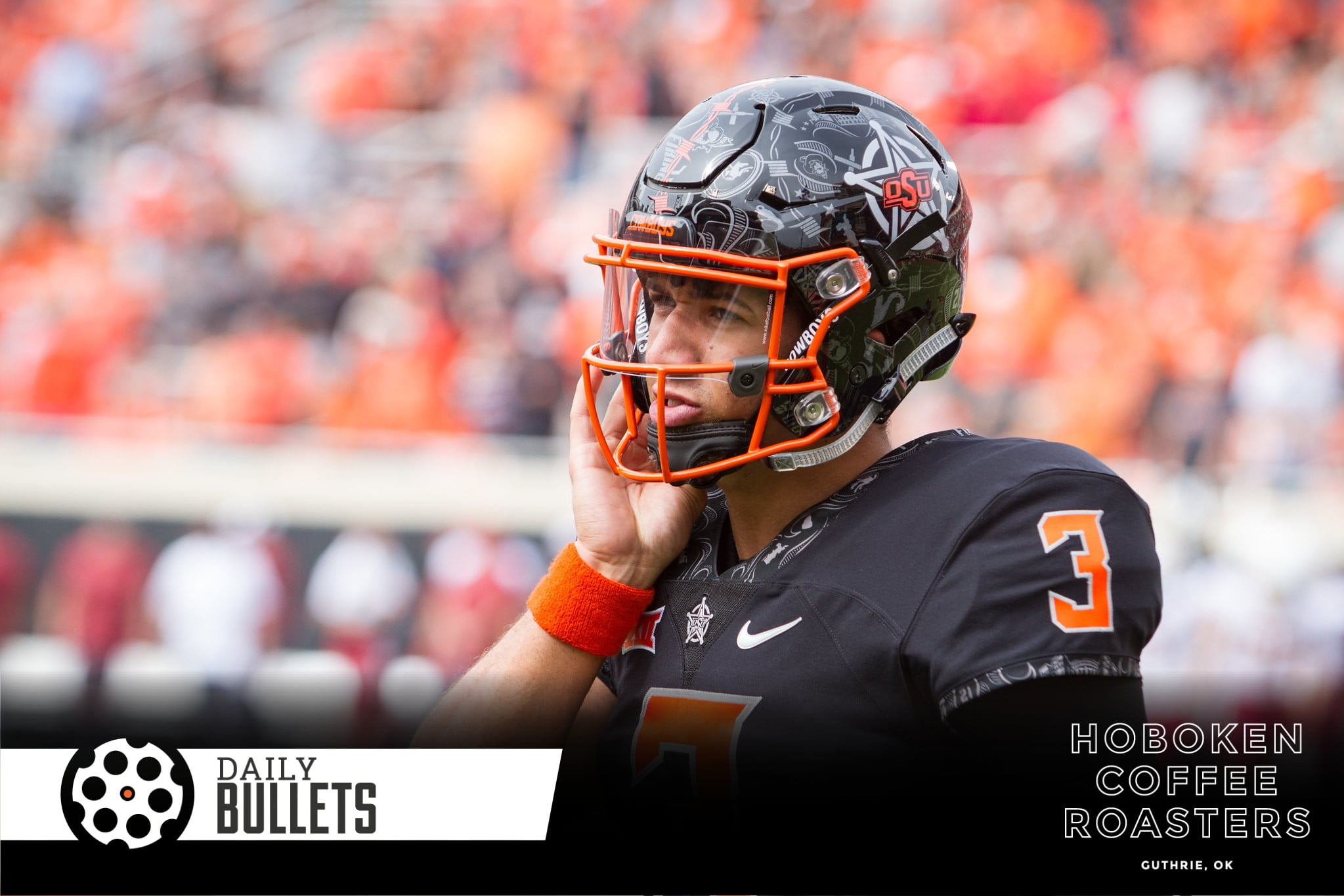 “Be worthy of a worthy mate.” -Charlie Munger

• As badly as we all want to know who will be the starting quarterback for OSU this year – Jenni Carlson points out the greatest variable in the quarterback battle that’s currently unknown.

But who gives OSU the best chance to win games?

Ah, there’s the rub. That could be a more difficult question to answer if Brown and Sanders are as comparable as coaches and players have said.

The truth is, the answer might not be obvious until the Cowboys play in a real, live game. It might take getting on the field in Corvallis and going against the Beavers before Gundy and Co. can figure out who gives them the best shot to have the most success this season. Before they can decide that, the coaches might need to see Sanders and Brown in those situations. [NewsOK]

It seems absolutely reasonable for coaches to need that information to land on a starter – think about the 2012 and 2013 quarterback battles between JW Walsh, Clint Chelf, and Wes Lunt.

But here’s the thing – there has to be some level of expertise (decades of experience) that leads to an educated hypothesis about who should be the starting quarterback, right?

• As Justice Hill makes the rounds with the media, some interesting tidbits are found. For instance, this practice scenario he revealed was fascinating.

Although (Hill) only had 13 receptions for Oklahoma State in 2018, he said he practiced primarily with the receivers all year, which should bode well for his familiarity in the passing game.  [Pressbox]

What an edge that could be in recruiting – if you get good enough as a running back, you can spend time with the greatest kingmaker of receivers in college football.

• College football analyst Phil Steele has the Pokes finishing sixth in the Big 12 but points to an interesting number as a basis for improvement this fall.

They go from No. 119 on my experience chart to No. 53, so they are stronger. Prior to last year, Oklahoma State had produced three straight double-digit win seasons, and probably won’t need a bowl upset to avoid a losing season like last year. [GoPokes]

“Experience” isn’t the first word that comes to mind when I think of this team but that may be partially because of the turnover around the coordinator positions. But if you think about the 22 positions on offense and defense, you really just have strong turnover in the defensive line, linebacker, and quarterback units while the others are pretty well in-tact.

• Marshall had a great piece yesterday looking at an interview the newest 2020 Cowboy Football commit – this comment caught me off guard.

(Monroe) Mills will miss his senior season after tearing his ACL recently, but he’s bound-and-determined to get healthy before his OSU career begins in 2020. He says he’s focused on getting back to full strength, adding weight and lifting weights, and preparing for the six-hour move from his home state to be a productive college player at full strength. [PFB]

More than likely, an offensive lineman is years away from seeing the field in college, he’s got plenty of time to recover. It’s a real bummer to miss your senior year of high school football, best wishes to the commit.

• There are a couple of OSU angles here – how Cunningham is held as the top recruit in college basketball by yet another analyst 😍😍 and the model of hiring a family member and consequentially landing their touted relative (in this case son) being affirmed.

Evan Mobley to USC. Not exactly shocking since Andy Enfield hired his dad as an assistant. Mobley is one of the best players in the Class of 2020 (my pick goes to Cade Cunningham as the No. 1 player in the class). Smart move by Enfield to hire the dad to get his two kids.

• Walking is the easiest superpower

• Tramel continues his Tennessee trek and heads to the Smokey Mountains

• Solid look at the effects of “digital minimalism” here