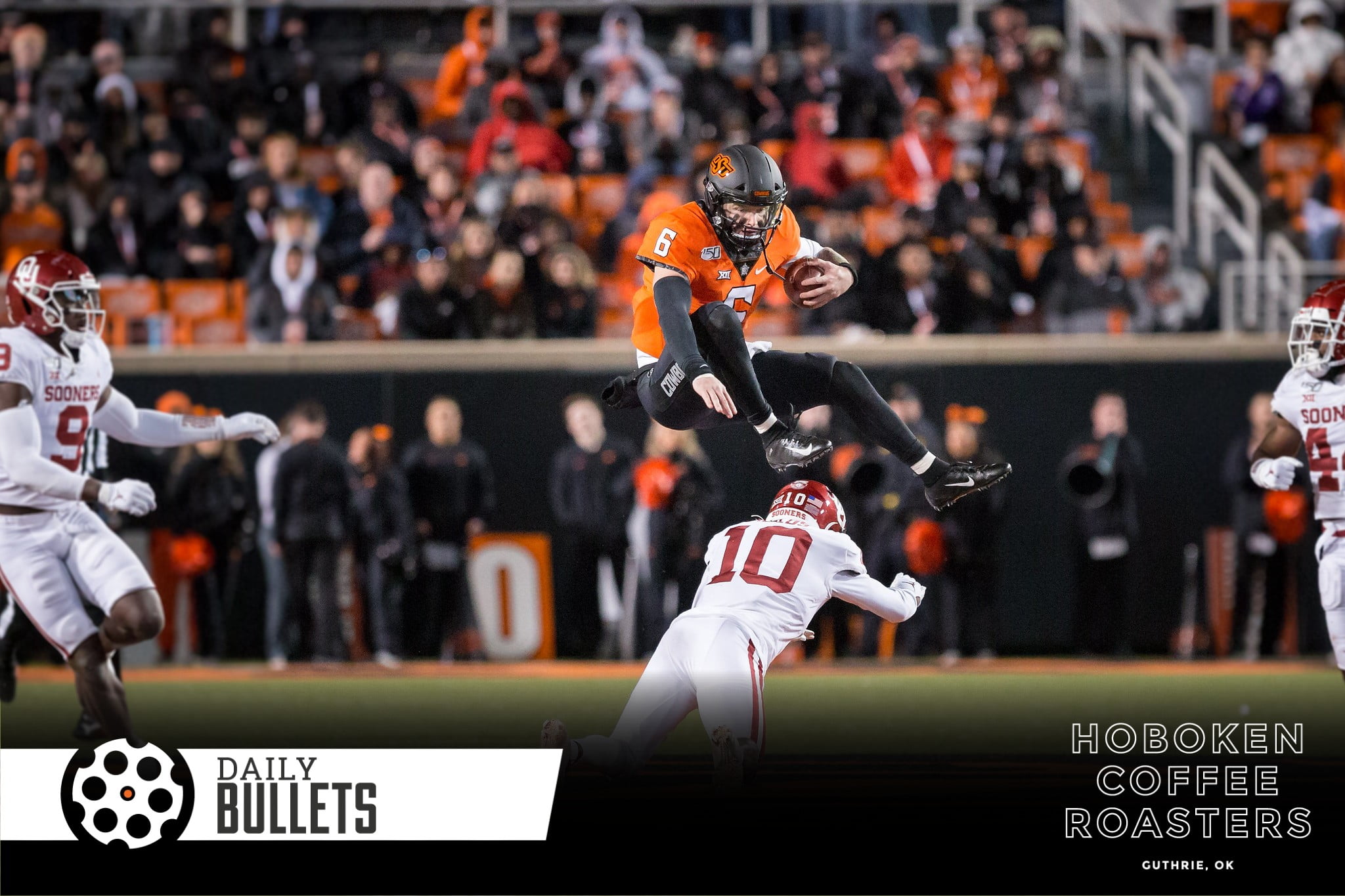 So how about that 41-point win in the NIT Tipoff championship game?

• It’s hard to feel good about what happened in Stillwater on Saturday night given the outcome but here’s a perspective where you might find a bit of relief.

Here’s a reality check: You’re a two-TD dog to a team trying to get into the playoff, and you’re playing your second-team QB, are without your ace wideout and your tailback is trying to Houdini nine guys on every play. And you’re doing it all from a deficit. That’s just never going to go well. [PFB]

A friend at church made the comment yesterday – if OU played that game without Jalen Hurts and CD Lamb, do they win? This assumes OSU plays Tylan Wallace and Spencer Sanders as well. These are the only words I’ve found to find consolation on the topic.

• I liked this thought about what OSU definitely (barring transfers) has coming back next year.

It’s in the trenches and in the secondary where OSU regularly has struggled to replenish. And now the Cowboys have young players who are producing in those critical areas.

In those hard-to-replace-areas, you’ll miss the Johnny Wilson and Marcus Keyes on the interior, as well as an all-conference level defender in AJ Green, but there’s lots of depth on the o-line with all of Josh Henson’s classes. Surely the holes can be plugged with a couple of those guys.

Thor may not sign until the late period in April, but a commitment is expected before then. Oklahoma State remains in the driver’s seat but Kentucky has done a great job of silently picking up ground on the four-star prospect. More than just a two-horse race, though, it would still make for a relative surprise if he were to not choose the Wildcats or Cowboys. [Rivals]

Thor’s comments sort of indicate that Kentucky isn’t “all in” on him at this point and a visit is still in the air. This is repayment for OSU taking Cade Cunnigham, isn’t it?

• Boynton’s Cowboys have made into CBS’ top-25

• More yards than seven of the last 12 running backs to win the Heisman!

🏈 His 1,936 rushing yards are the most at #okstate since @BarrySanders in 1988.
🏈 He is the nation's most productive running back by any measure.
🏈 He has more rushing yards than seven of the last 12 RBs to win the Heisman.

• Couldn’t agree more with Boone on this one – can’t thank ya’ll enough for reading and supporting the site!

• Wild story about how an NBA exec stole $13m from his team (the Sacramento Kings)
• 100 years later, the madness of daylight savings time endures (I don’t have a strong conviction on the topic but an interesting read)
• Finished Malcolm Gladwell’s new book over the weekend – good stuff. Interesting read on dynamics of interacting with people you don’t know