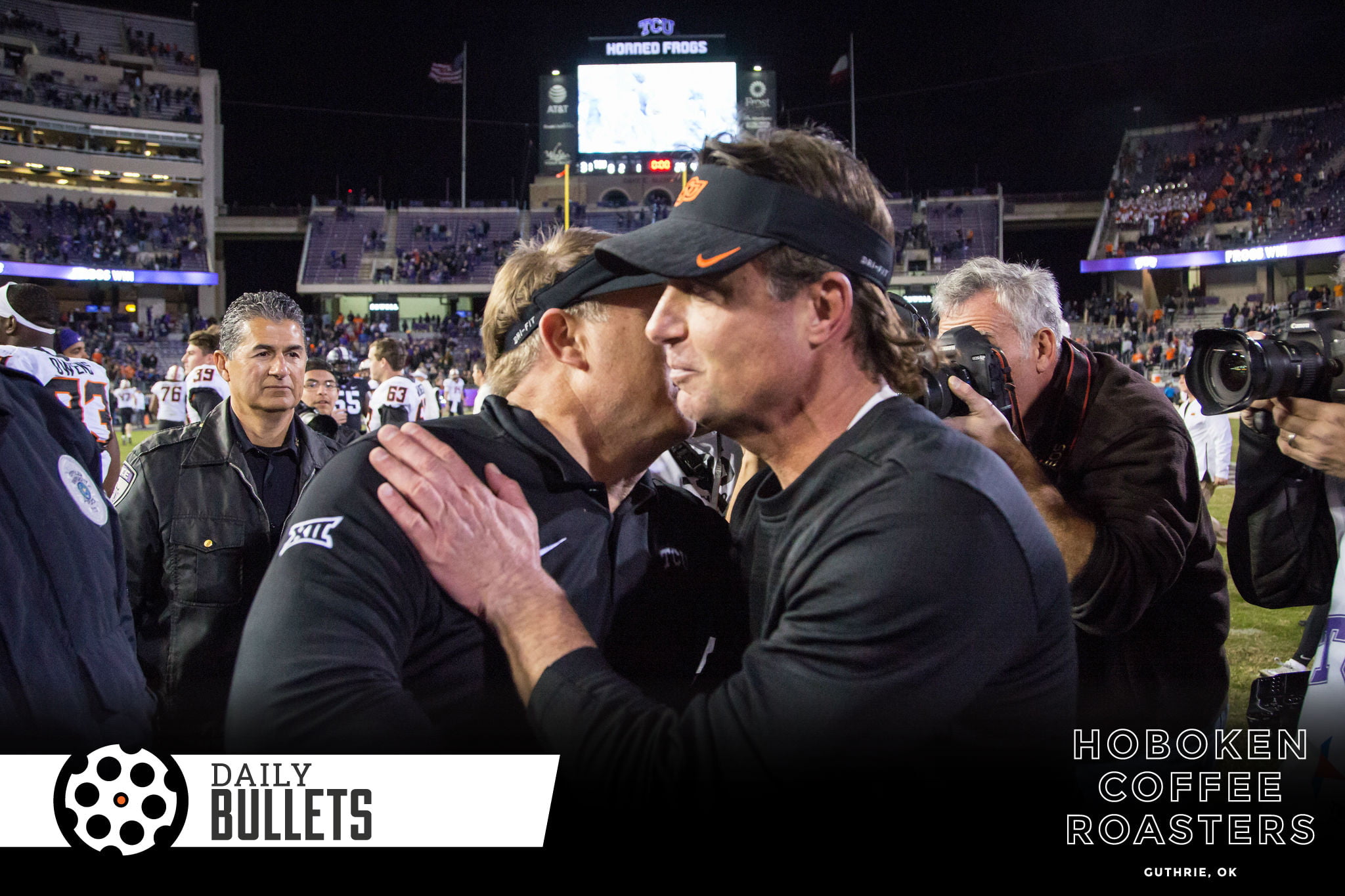 • Mike Gundy had a thought I particularly enjoyed on playoff expansion.

A week ago, the Oklahoma State coach shared his vision for an expanded playoff system in college football. He wants eight teams — the champions from each of the Power Five conferences, the best team from the Group of Five conferences and two at-large selections — and while all that isn’t different from what many others have suggested, he had a great idea about that Group of Five team.

“Let’s just say it’s a Boise State,” Gundy said. “In most cases, we would all agree that across the board, athletically, Boise wouldn’t be in the same level as Alabama.

“So let’s put them against the middle-of-the-road playoff team. Make that a competitive game.” [NewsOK]

Looking at giving higher seeds a bye (a la Big 12 Basketball tournament) to create more compelling first-round games seems like a big win to me. Give me some feedback in the comments if you’ve got ideas and I’ll start trumping your plan in future editions.

• As the bowl practices roll on, it’s hard not to look at backups getting reps and project early leads for the spring.

I don’t think anybody will be surprised that at quarterback both Spencer Sanders, the former Texas Gatorade Player of the Year at Denton Ryan looked strong and confident in his reps and the same could be said for Hawaii graduate transfer Dru Brown, who was probably very surprised that he did not play at all this season. Sanders is surprised as well.

The two likely won’t play in the bowl game, but a huge competition for the starting role for next season is about to break out in spring ball. Check that, it has been ongoing already. Just by sight, with his bigger frame and obvious athleticism, Sanders is more impressive. [GoPokes]

While Brown and Sanders are surprised, the thing that has me the most disappointed as a fan is that I won’t know what could have been.

This isn’t Dez Bryant-senior year stuff but I don’t see Tylan Wallace hanging around forever. We won’t know the difference Dru Brown’s quick burst in the run game could have made as opposed to the Cornelius’ gallop. I don’t know if Sanders could have ignited a moribund offense against TCU or Kansas State – and I don’t know if it wouldn’t have done anything at all.

• Looking at what remains of the 2019 Cowboy Football recruiting class (signees plus Dru Brown and Kemah Siverand), a few spots remain. What will Gundy and Co. add with the few remaining spots?

Running back is the biggest priority to me. Deondrick Glass seems to be the most viable, and I’ve flipped on whether he’s coming to OSU or not as many times as Dax Hill flipped his college commitment. And a D-lineman — likely a D-end — is the second most obvious spot to fill. As for the third spot … I’d say it’s a filler spot. [PFB]

Something I heard PFB contributor Adam Lunt espouse in his post-early signing day pod was that OSU historically takes a few immediate contributors (five) then splits between developmental guys and guys who can play in a year or two. I think you hope to land someone who can play sooner than later with that last spot but you settle for leaving the spot for a transfer (portal for the win) or take a developmental lottery ticket.

• After beating OSU, TCU capped off their season with possibly the ugliest bowl win in the history of tackle football Wednesday night. But Gary Patterson had some comments that could be spoken for OSU highlighting the importance of a bowl victory.

It was ugly, and even Gary Patterson admitted as much after the game, telling ESPN, “I would say this season defined our whole season, except we came out on top. This team got to seven wins, when five weeks ago we were 4-6. So you got through the season, go through December and to finish with a winning season is a cool thing.”

It is a cool thing, especially considering how this game went. Grayson Muehlstein finished an abysmal 7 of 20 for 27 yards, zero touchdowns, four interceptions and TCU won the game. [HCS]

Expectations are shaped by a lot of things – talent, coaching capability, culture, and recruiting are a few. But there’s more than a little truth to “what have you done for me lately” and if the answer is losing to two middling teams (generous comment toward the Frogs, would appear to be underrating the Missouri Tigers), you’ll start decreasing those expectations.

• Looking at the top stories from 2018, the media machine that is Oklahoma State Football churned out loads of attention with Mike Gundy’s theatrics.

From the Jalen McCleskey lockout to Twitter socioeconomics to all the snowflake talk, Gundy seemed a little freer to speak his mind this year (a rolling five-year contract will do that, I suppose).

There’s not a singular mini rant that sticks out above the others, but they were all fascinating for different reasons with an untethered Gundy serving as their unifying thread. [PFB]

It’s hard to fathom how much attention Mike Gundy has both a) brought to the program and b) drawn away from the good or bad performance of his football team with his shenanigans.

• I love this Bill Simmons’ idea of Michelin ratings for NBA players – ranking how watchable/enjoyable they are to partake in.

Whoa! Great idea. Michelin ratings work like this: Every restaurant tries like hell to get 1 star (which basically means, “Hey, everyone, if you’re in town, you should eat here”), pines for 2 stars (“You should absolutely go out of your way to eat here”) and dreams of 3 stars (“IF YOU LOVE FOOD YOU HAVE TO EAT HERE AT LEAST ONCE OR ELSE YOU’RE AN ABSOLUTE FRAUD”).

A perfect way to describe NBA players, right? Westbrook used to be a 3-star experience; now he’s probably a 2. My Slovenian son Luka Doncic entered the league as a 1 and quickly vaulted to a 2, and by next month, he might be a full-fledged 3. You get the idea. [TheRinger]

• I liked this NYT piece – they interviewed “achievers” about their morning routine. This thought was pretty apt as to what defines most mornings.

While the majority of the people I’ve interviewed tend to get up early — the average wake-up time for everyone I’ve talked to is 6:27 a.m. — successful people like to experiment to find the sweet spot that works for them.

For many of us, the time we wake up depends almost entirely on when we need to be at work, school or elsewhere. This often means waking up as late as possible to maximize sleep time, with the only goal being to make it out of the door on time to avoid being late for wherever we need to be first thing. But experimenting with your wake-up time gives you the space you need to enjoy your mornings. [NewYork Times]