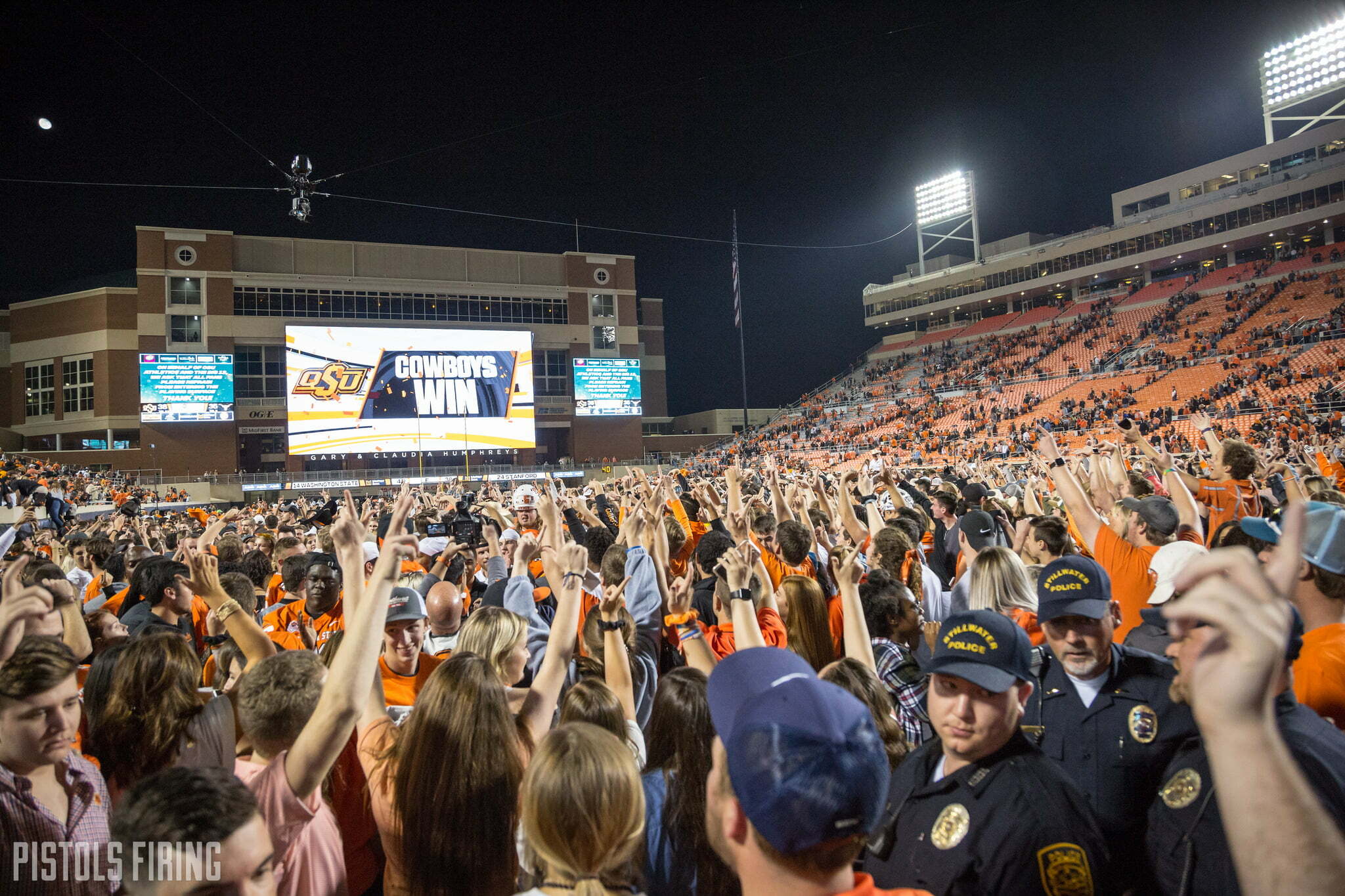 The week between Christmas and New Year’s is probably the strangest of the year. Economical purgatory that everyone should have off work but few actually do. What it allows for, though, is some reflection. On the year, on life, on what we want from the following 12 months.

It allows us to look back at what mattered and try to figure out the future. All the fun stuff that enhances why all of this exists to begin with. Anyway, I went back and pulled with I thought were the 13 biggest Oklahoma State stories of 2018 based on how much you read them and how important I personally thought they were.

I don’t know that I actually believe this is the No. 1 of 2018, but I wanted to start on a positive note! OSU roped its 52nd overall national title (and 11th in golf) at Karsten Creek by absolutely thumping Alabama in the finals. I know golf isn’t football or hoops, but to be there for that, to watch Matthew Wolff react, to watch Mike Holder react, it was maybe my favorite OSU sports moment of 2018.

No. 11. What a scene. pic.twitter.com/IJVYZsnGSZ

It started with Mike Holder this summer (although it really started long before that), and the conversation has been running on low grade in the background since then. It picked back up a few weeks ago and is taking a full head of steam into 2019. When you win 10 games, this is the 14th or 21st ranked storyline. When you win six, it’s not.

The lightning rod was of course Justice’s younger brother. He was the one around which all of the conversations swung, and he was the one guy in the 2019 class who was most intriguing to OSU fans. We had a blast covering that drama all year (and judging from the numbers, you had a blast reading it!)

From the Jalen McCleskey lockout to Twitter socioeconomics to all the snowflake talk, Gundy seemed a little freer to speak his mind this year (a rolling five-year contract will do that, I suppose).

There’s not a singular mini rant that sticks out above the others, but they were all fascinating for different reasons with an untethered Gundy serving as their unifying thread.

“I try to get hits on social media,” Gundy said in the summer at Big 12 Media Days, probably not knowing just how many he was about to get.

I’m willing to listen to arguments for moving this either up or down. We probably covered it too much. Other places probably didn’t cover it enough. There was so much wrapped up into the QB1 decision this year including Corn’s legacy, the future of the program, OSU’s biggest transfer, the philosophy behind playing freshmen, the philosophy of winning now vs. winning later. It was impossible to unfurl all the different layers, which is what made it so interesting (and such a big deal).

I think we’ll look back at J.D. King, Jalen McCleskey and Darrion Daniels transferring five years from now and say that it had less to do with OSU and Gundy and the culture and more to do with where college football was headed with player empowerment.

Another one. Another one! Rashaun Woods. Dez Bryant. Justin Blackmon. James Washington. Now Tylan. The latest in a lengthening line of great ones at OSU. Kasey Dunn cigar puff dot gif.

Turns out, @DeAndreHopkins has been Mossing people since way back when. ?

It was the apex moment this season for a number of reasons. OSU was coming in off its lowest point of the year to date and touched probably its highest. BPS rocked so hard that night. Gundy and Herman got into it, and Gundy performed an escape that would have brought John Smith onto the mat during the postgame handshake. The entire thing was completely surreal, and I could not have loved it more.

9. OSU Beats OU Despite 48 from Young

I am apparently biased toward games I was at, but this one felt like a monster. You could argue me into the KU game at Allen Fieldhouse, the KU game at home or the WVU game in Morgantown, but taking down a top 10 NBA Draft pick in GIA after he nearly dropped 50 and rushing the court on OU is almost always going to be above those on my list.

It seems more normal now (and it also seems like they’ve been in Pittsburgh for about five years), but the cornerstone(s) of an entire era of Oklahoma State football going to the same NFL team in the same draft was both amazing and wildly improbable. It should probably be higher on the list.

I think I wrote more posts about RPI than Kyle Boone did about Dax.

12. Gundy Rolls (but another Bedlam loss)

The 2018 Bedlam football game didn’t feel as monumental as some of the ones that came before it because there wasn’t as much at stake for both teams. But it was probably one of the four best of the Gundy era. The big takeaway for me is that Gundy has in some ways shed his Bedlam ghosts. He’s started letting it hang in the last two years in a way he just didn’t before. It makes me care less about his 2-12 record against OU (although, you know, 2-12) and more excited about future Bedlams. /checks recruiting rankings of both teams

Until this year it had been a theoretical that Mike Boynton could actually recruit. Did I believe it? Sure. Did his early returns suggest it? Yeah. But then he went Kalib Boone, Marcus Watson, Avery Anderson and Davonte Davis boom boom boom boom, and I was a believer. We have yet to see if it can amount to a Big 12 title contender year in and year out, but the foundation is being laid.