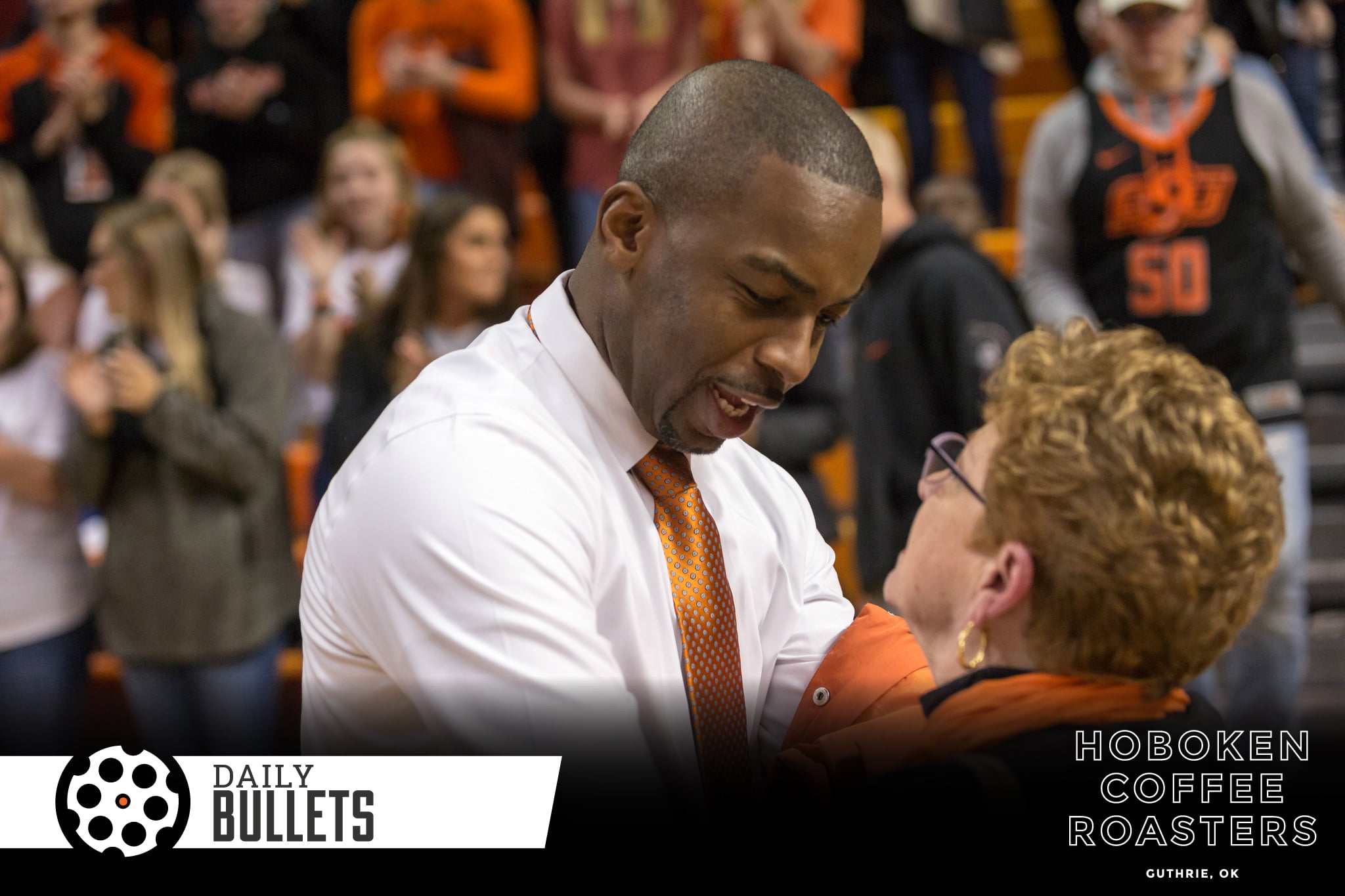 Welcome to the PFB Daily Bullets, where Mike Boynton is the crootin king and I woke my children up to chants of S-E-C, S-E-C this morning after drinking my Hoboken Coffee.

Liberty but No Justice?

Mike Gundy addressed the Justice Hill situation on Sunday by giving a non-answer answer when asked about it. If you’ve been reading between the lines, it sure seems like No. 5 is sitting this one out. At least he’ll get to see Mike Conley play!

Despite being one of the older bowls, OSU hasn’t ever been in the Liberty Bowl. On the agenda for the players will be attending a Grizzlies’ game, they’ll get a Bass Pro Shops shopping spree and attend a rodeo. [PFB]

If we don’t see a mullet riding a mechanical bull then what’s the point of this bowl or really any bowls? Also, here is a video I made talking Liberty, Mizzou and why I’m so annoyed with the University of Texas.

I didn’t remember (realize) that Corndog got so many snaps in the pre-Camping World Bowl practices last year. Apparently that’s going to be the case this time around, too.

That means Cornelius will get his turn to rest, and the Dru Brown/Spencer Sanders Derby gets a soft opening over the next few weeks, before intensifying in spring and hitting the home stretch next August.

“I’m excited to see what those guys will do with the extra reps,” OSU offensive coordinator and quarterbacks coach Mike Yurcich said. “They’re great practice players. They love playing the game of football. We give them reps throughout the week, but to see their reps increase over bowl season, it’ll be fun to watch them grow.” [NewsOK]

That’s all fine and good — it sounds great! — but would it be more shocking if Sanders isn’t named the starter or if Dizzy doesn’t take another 3 all season? We all know who’s going to be under center starting in 2019, and everything else at this point is just posturing.

Brown, by the way for the folks who were asking, would need a special exemption to transfer again in the offseason.

This was pointed out in our Slack chat, but think about all the things that had to fall into place for OU to make the CFP and Kyler to (probably) win the Heisman. Disgusting. Ant they still needed to get the benefit of the doubt in the CFP picks.

College football’s decision-makers sided with the Sooners on Sunday. In other news, the sun rose in the East and the ocean met the shore. Oklahoma will play Alabama in an Orange Bowl semifinal on December 29; the Sooners edged Georgia and Ohio State for the right to meet Godzilla. [NewsOK]

He grabbed another top 100 recruit on Sunday evening, this time his first in the 2020 class. It led to this fabulous comment by somebody with an even more fabulous PFB handle in the comments section.

Recently-departed QB John Kolar is headed to Iowa State to play with his brother.

Now, we also learned the Oklahoma State quarterback John Kolar, who recently announced his intention to transfer following his graduation in December is heading to Iowa State. Kolar will join his younger brother Charlie, who has developed into a major offensive threat for the Cyclones as a tight end. Kolar is 6-6, 200 pounds and will graduate in four years. He very little action in his four years in Stillwater but has been an excellent student and member of the program. Iowa State has had two quarterbacks leave after the emergence of freshman Brock Purdy and also has a senior that is graduating. [Go Pokes]

He will definitely enter next year’s game after ISU’s first three QBs get hurt and beat OSU in Ames with a sterling performance after which Gundy says, “He wasn’t very good in practice.”

This by Ian Boyd is solid and has OSU parallels. He talks a lot about how you recruit at a mid-tier B12 school and why landing big time skill position players is kind of overrated.

Texas HSs love the spread offense and many of them will play their best athletes at QB or WR and give them high level instruction and practice in developing rep-intensive skills that make for devastatingly effective spread passing attacks. Winning battles for the top QB and WR talent in the state of Texas is, quite frankly, a highly overrated pursuit. EVERYONE has fantastic skill talent in this league, even Kansas had a WR in Steven Sims and a RB in Pooka Williams that would be starters or prominently involved in most offenses around the country. [SB Nation]

While I agree that this is a starting point, as he notes, for B12 schools to even be competitive, you also have to spend a lot of emotional and logistical capital making sure you nail it, or you’re going to lose your job in a hurry. The three ways Boyd proposes for Tech? Have a QB guru, successfully attack other QBs and put together a more proper roster for what Matt Wells wants to do.

Staggering piece here on 41. I have thought about it many times in the last few days.

As the end neared on Friday night, his son George W. Bush, the former president, who was at his home in Dallas, was put on the speaker phone to say goodbye. He told him that he had been a “wonderful dad” and that he loved him.

Those were his last words. [NYT]