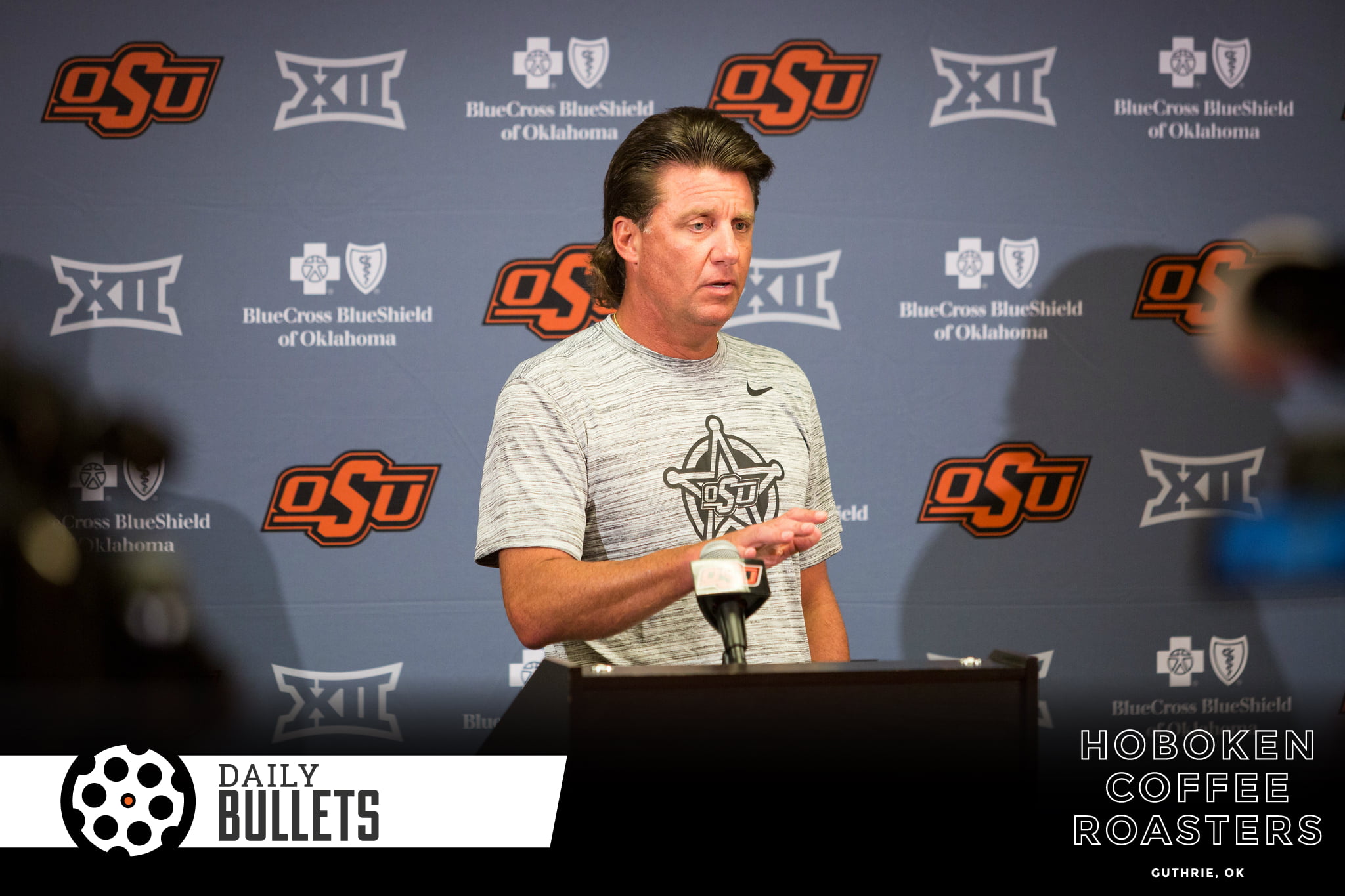 Time to finish off all of the New Years’ resolutions and eat your black-eyed peas – here’s to hoping your 2019 is filled with Cam McGriff alley oops, Spencer Sanders-to-Chuba Hubbard RPOS, Mike Boynton’s splashy signings, and plenty of Tylan Wallace long balls.

"We’re going to put the players out there that we feel give us the best chance to perform and win the football game. In most cases, it won’t be a player that hasn’t played in the season."

Do you want to win for the outgoing seniors, the fans that made the trip, and the orange-clad faithful? Absolutely.

But decisions shouldn’t be made with only December 31, 2018 in mind. Could playing the Liberty Bowl help Spencer Sanders in 2019? Could playing Tyler Lacy and Brock Martin extra snaps help the 2019 defensive line? It’s hard to argue that it wouldn’t.

Gundy left the door open saying “in most cases” so we can clearly eliminate the concept of an all-freshman offense seeing the field. Gamesmanship is always involved but it sure seems short-sighted for the Pokes to not give the young guys some run.

• Former Cowboy offensive coordinator Dana Holgorsen may be on the move in a surprising way.

According to our sources at Heartland College Sports, the interest is real, and mutual, and is “picking up steam”. We have also heard that Holgorsen is very close with Houston megabooster Tillman Fertita, who is also the owner of the Houston Rockets.

Also, WVUWire.com reports, “Holgorsen is prime for the picking right now with his buyout at WVU scheduled to reduce to $1 million at the beginning of the year. WVUWire as also learned that WVU is potentially not prepared to counter any offer made by the University of Houston.” [HCS]

Houston has been a prime launching pad – seeing guys like Holgorsen, Kevin Sumlin, Art Briles and Tom Herman land in Power Five jobs after success there. It’s fascinating to think about a coach stepping down to the level but it sounds like the stars could be aligned for it.

• In hindsight, OSU’s 2008 win over Missouri may have changed the Cowboy Football program.

“I think that was the biggest win in my career based on that kinda turned the table for us,” Gundy said earlier this month. “We had been really close, but at some point, unfortunately, you have to do something that makes your team, the people that follow your team, think, ‘Hey, this is gonna be something different,’ and they were really good then. I think we played them, they hadn’t ever had a three-and-out the whole year. That was a big win for us.

“That was just a huge win for us, especially on the road because at that time, we hadn’t won a lot of games on the road, not just me but anybody that coached at Oklahoma State in league play. We weren’t very successful on the road until you go all the way back to when we had Barry here.” [PFB]

As a bystander at Faurot Field that day, the shock and awe both for the visiting and home fans was palpable. A Cowboy team unable to win on the road conquered one of it’s biggest demons that day.

• While Gundy says not to look for new faces, the youth movement around the safety position is pretty wild.

OSU will mostly rely on five players in rotation at its three safety positions Monday. Four of them are first- or second-year players, and three of them are true freshmen who had yet to even go through an OSU conditioning workout at this time a year ago.

“There’s been a lot of growth back there during the bowl practices,” said Malcolm Rodriguez, who feels like a veteran in the group despite being a true sophomore. “They’re starting to get used to the game tempo and how the feeling is. They’re just going out and making plays, and that’s good.” [NewsOK]

• Cowboy alum Blake Jarwin went and had himself a career-day yesterday, racking up multiple touchdowns.

Midway through the third quarter, Jarwin leads all receivers with 81 yards. He caught all five of his targets for all three of the Cowboys’ scores.

With a division title and playoff berth for Dallas already wrapped up, this game is for little more than pride as the Cowboys’ look to take care of a divisional rival — and to accentuate the placement of each team at first and worst in the NFC East, respectively. [PFB]

Cowboys TE Blake Jarwin has had quite the journey:

• This is the most incredible punishment handed down by America’s judicial system (to my knowledge): being forced to watch Bambi monthly for a year.

A Missouri judge ordered a 29-year-old man to watch the movie Bambi once a month during his year behind bars, authorities announced on Monday. David Berry Jr. had pleaded guilty to the “illegal taking of deer” in what the Missouri Department of Conservation is calling “one of the state’s largest-ever poaching investigations.” Berry is also serving a 120-day sentence for violating his felony firearms probation. [Slate]

• The follow-up piece on the concept of a “depth year” (not taking new hobbies or possessions) had an interesting outcome that’s got me considering some of my goals for 2019.

Enjoying ordinary things seemed to take less effort. Without anything resembling striving, I derived more satisfaction from meals, furniture, cups of tea, walks to the store, hellos and goodbyes with friends, even odd details like illustrations in books and the shape my own handwriting.

In hindsight I attribute this effect to a deceptively simple shift in where I was expecting to find fulfillment: here, rather than there. As I got reacquainted with the things and people already around me, I started to let go of a certain background belief—pervasive in our consumption-driven culture—that fulfillment is something whose ingredients still need to be acquired. [Raptitude]