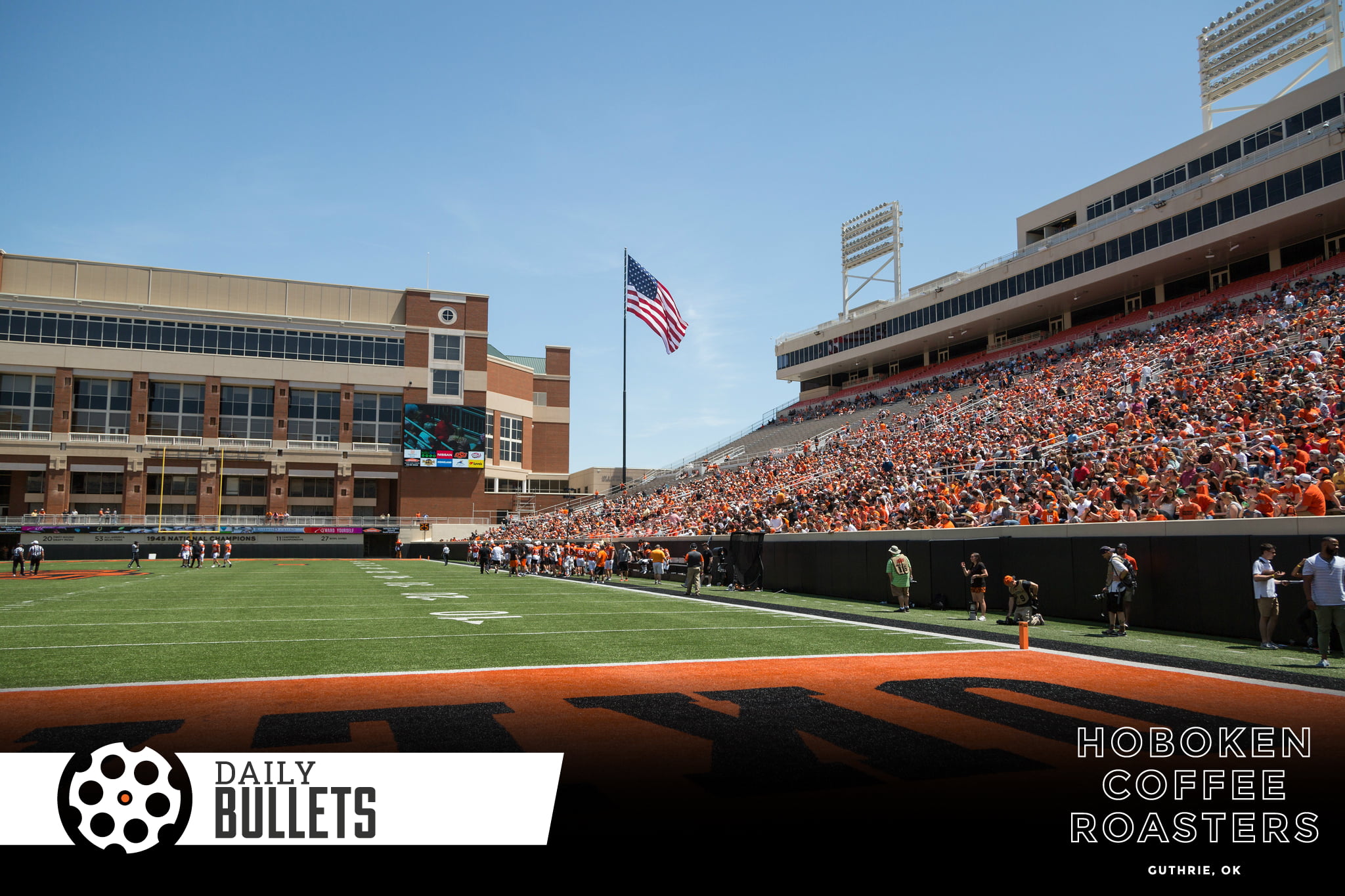 If you want to spend some time dreaming up how great the next Cowboy Basketball season can be, watch repeat film of this potential addition to the 2019 class and think about a Todd-Boone frontcourt.

(T)his will be the first time that fans will get to see Spencer Sanders and Dru Brown in action. And no, I don’t count the one snap hand off Brown had in the Liberty Bowl as action.

Will this tell us who the starting quarterback will in the fall or whether or not they even pan out? No, but it gives everyone, including the media, their first glimpse into what the offense could look like come September. [GoPokes]

The possibility of seeing the future of the Cowboy offense kept me coming to games late last year – the spring game could very well have the same effect.

• The Cowboy pitching staff is super talented this year and loaded for a deep playoff run.

The Cowboys finished second in the Big 12 last season, making their sixth regional in six seasons under Holliday, despite their possible weekend rotation missing most of the year with injury. (Jensen) Elliott pitched in only four games, while left-hander Parker Scott missed the full season after undergoing Tommy John surgery, as well. After making a start in OSU’s first two series, lefty Mitchell Stone suffered a broken foot after stepping in a sprinkler hole at Arizona State and was out for the year.

All three are healthy for 2019, with junior college product Logan Gragg inserted between Elliott and Stone in the weekend rotation. [NewsOK]

• A big part of the Cowboys flaming out late in games (or losing ground to begin with) is a severe lack of reinforcements.

Oklahoma State’s bench is small, but there was hope a month ago that Curtis Jones and Duncan Demuth could step up and provide meaningful minutes when the five starters need a break.

The Cowboys are getting nothing from their bench right now.

Jones and Demuth scored five points in 20 minutes combined (18 from Jones) on Wednesday. Against Kansas, they scored four points in 29.

I don’t think anyone’s counting on Demuth for more than a McGriff/Anei breather but Curtis Jones has to be a shot in the arm off the bench.

• An underrated aspect of the new Cowboy offensive line coach is how his strengths will likely to fit with Spencer Sanders.

I think Spencer Sanders will be OSU’s quarterback in 2019. Remember, the new line coach, (Charlie) Dickey, has extensive history creating lanes for a running quarterback, at K-State. [NewsOK]

• It was special Wednesday night to see all the Suttons courtside doing well.

Best part of the night was the Sutton family reunion back in Gallagher-Iba!
Cowboy fans, stick with our guys… see you Monday night! pic.twitter.com/lAb8VVm7PU

•  Happy belated Valentine’s Day with a remark representative of one of the few parts of the athletic department who can talk smack.

• This fake recruit (not a real human) earning a recruiting ranking is wild.

• It’s not everyday part of a country tries to leave – trials upcoming.

• I know this is mocking the idea but I love the fleece vest at the office.