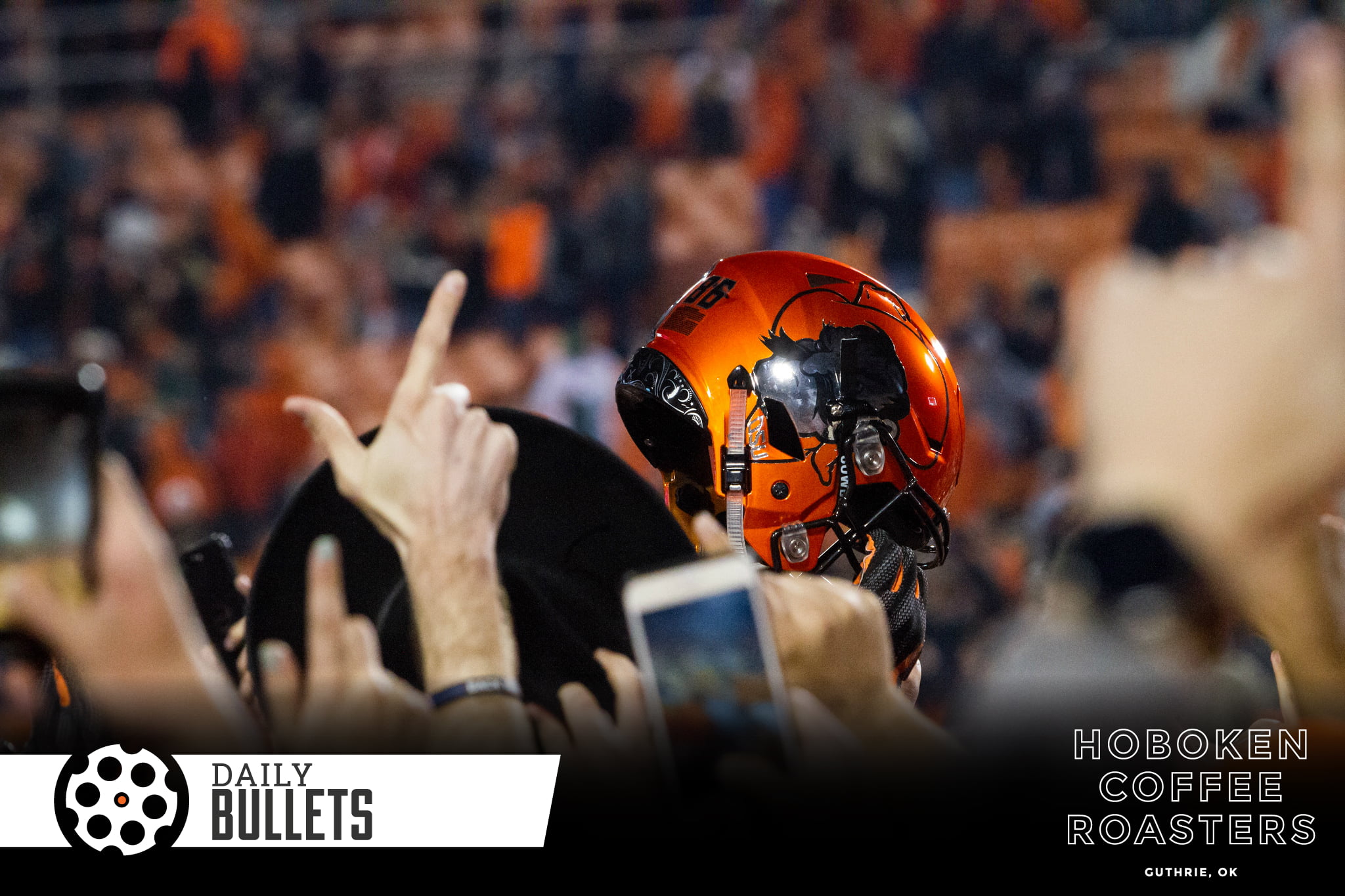 “I have always believed that it’s important to show a new look periodically. Predictability can lead to failure.”
– T. Boone Pickens

Here’s to some new looks to throw at the Wildcats today.

• Most Viewed (No. 1): OSU hires Sean Gleeson – Let’s deal with the shock value first: OSU went to a premier institution for academics and hired a football coach. This was shades of Jim Knowles but more brainy and less proven. How you feel about this hire is in absolute direct proportion to how you feel about Mike Gundy’s hiring capabilities.

An underplayed aspect of this hire is how much you believe Mike Gundy is calling the plays versus his hired coordinator. There’s a spectrum of thoughts in the fan base but giving the reigns to a guy in his mid-30’s will either be super fun or we’ll see draws on 3rd-and-9 knowing who’s really in charge.

• Most Viewed (No. 2): Five Reasons to be Fired up about Gleeson – The biggest reason to be fired up about this hire (in my opinion) isn’t 2019 but 2021. When Deondrick Glass (Chuba headed to the Olympics/NFL before then right?) and Spencer Sanders have aged like fine wine in the OSU-system, Gunnar Gundy is split out wide for complexity and a Biletnikoff winner who’s a sophomore in high school will be just setting foot on campus. Boone nailed this one – it’s a move done for continuity, a move done not for the initial splash but for the ripples he will be causing a half-decade from now.

• Most Viewed (No. 3): OSU Offers Jerry Rice’s Son – I’m convinced most of these views are from Kyle Cox, our resident 49ers’ fan, but it’s always fun to consider what a gene-pool can offer. Still, for every Barry Sanders, Jr., a college football talent but not an other-worldly talent, there’s also the possiblity of the Mannings. Enjoy these father/son NFL duos.

• Most Viewed (No. 4): Josh White Commitment Status in Question – Situations like this are no fun. OSU hustles and gets in early on an uber-athletic developing prospect then blue bloods come along behind and swoop up the talent. It’s really hard to blame a prospect for not responding to LSU’s call, nearly twice as many fans in the stands, an NFL-pipeline that’s 2x closer to home.

• Most Viewed (No. 5): OSU Could Play Dru Brown/Spencer Sanders Simultaneously – Getting back into the world of discussing how creative Gleeson is, stuff like this is really fun. At the level of competition, Gleeson was able to outmaneuver his peers, finding ways around comparable talent levels.

If that principle translates, Gundy just made a fantastic hire.

• Sione Fonua aside, is Mike Gundy done recruiting for the 2019 class?

Don’t expect Gundy and the Oklahoma State staff to stand pat. The initials rule of 25 does restrict, but both (Dru) Brown and (Kemah) Siverand came in last summer and counted forward as blue-shirts in the recruiting class of 2020. That can happen again.

Oklahoma State will no doubt be looking for any players that can make an impact, defensive linemen for sure, players in the secondary, and maybe a strong fullback type that will slide in as new offensive coordinator Sean Gleeson likes to use a player like that in his offense. [GoPokes]

That concept of rolling into the next class with transfers could be a super practical one for the Pokes.

• Rickie atop the leaderboard going into day three in Phoenix – has the crowd feeding from the palm of his hands in this clip. Wolff is hanging in there, dropping down to T24.

.@RickieFowler brought the noise at 16. ?

Bill Self took direct aim on Indianapolis, all but daring the NCAA to try and dream up something worse.

“In my 30-plus years of coaching college basketball, I have never witnessed such a mean-spirited and vindictive punishment against a young man who did nothing wrong,” Self said. “To take away his opportunity to play college basketball is shameful and a failure of the NCAA.” [CBS Sports]

It’s shocking that they would lay down the lay on a blueblood – the loss of De Sousa is massive with their big man (Azubuike) out for the rest of the year with injuries.