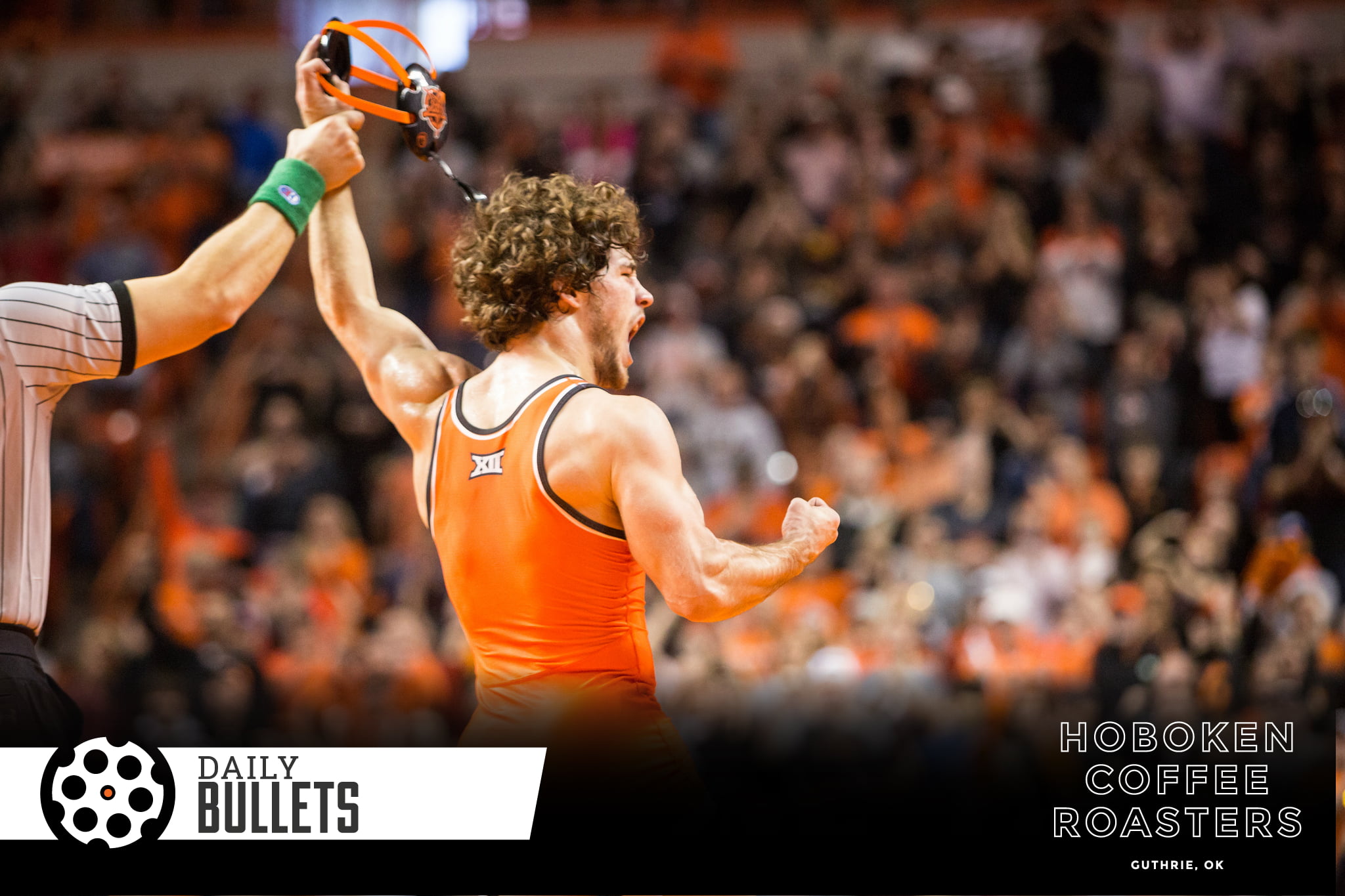 I can’t get over how much fun it looks like wrestlers have on their stage. Can you imagine the fun if basketball or football players were allowed to prance around the end zone like this?

• From the sound of those most intimately involved, the crowd played a significant part in yesterday’s monster dual win over Iowa.

“The crowd was so loud after Nick (Piccininni) pinned the defending national champ,” said (Daton) Fix, a redshirt freshman from Sand Springs. “Fired me up and I was ready to go.”

Same for every fan who packed Gallagher-Iba, including the healthy dose of Hawkeye fans who made the trip. Same for Iowa coach Tom Brands, who dismissed any talk of homemat advantage.

That makes for an incredible experience for all involved. You can bet if the match was in front of an ethanol-fueled (bad corn joke) crowd at Carver-Hawkeye Arena, Iowa shows up in a big way.

• I’m torn on whether I agree that this will be the player OSU misses the most this fall.

RB JUSTICE HILL
Statistically, Justice had his worst season in 2018 when you compare it to his freshman and sophomore campaign but if he would have played in all 13 games, he would have easily been over the 1,000-yard mark once again. Jordan Brailford could have been here, but Justice was probably one of the best running backs in Oklahoma State history. His ability to cut and his speed put him in that elite category… [HCS]

Sometimes production isn’t the best indicator of value. If you’re an overpowering talent (Washington, Blackmon), then, of course, the numbers sync up. But the value a player truly brings is presented by the stress he puts on a defense. What would Corndog’s numbers of been if he played with the 2014 offensive line? What would Mason Rudolph’s numbers of been as a sophomore if he had senior Blackmon (or Washington for that matter)?

Chuba Hubbard progressed nicely down the stretch, perhaps aided by the fresh legs as Justice Hill took a brunt of the carries for a chunk of the season. But I think arguments could be made for Justin Phillips or Jordan Brailford as most missed players as there’s no Chuba waiting to replace them.

• Something worth watching is who will emerge as the outside receiver opposite Tylan Wallace.

Last season, everyone in OSU’s regular receiver rotation was 6-foot-1 or shorter. Obviously, it wasn’t a problem. Bigger guys from the Cowboy back position, like Jelani Woods, got involved when size was needed.

But (Tyron) Johnson’s departure opens the door for some bigger wideouts to get on the field. Competition for that spot will include mostly taller guys like (LC) Greenwood (6-foot-3), (Patrick) McKaufman (6-6), (CJ) Moore (6-5) and (Jonathan) Shepard (6-4). And Braydon Johnson, a 6-1 speedster, will be in the mix as well.

Just one football season ago, the outside receiver position featured these names: James Washington, Marcel Ateman, Chris Lacy, Tyron Johnson. Tylan Wallace going into his third season is a great place to start but there’s always the possibility he’s gone after this season – it’s time to backfill the depth chart and prepare now.

• If you’re like me and had no clue what’s on the wrestling schedule for the Pokes, up next for the undefeated Cowboy Wrestlers is the Big 12 Championships then the national championships.

“I think as a team, we wrestled better than we’ve wrestled all year,” (John) Smith said.

This is a perfect time to peak, given that OSU’s next two competitions are the Big 12 Tournament (March 9-10 in Tulsa) and the NCAA Championship (March 21-23 in Pittsburgh). [TulsaWorld]

• Wrestling is such an expressive sport – Jackson got some great pics of yesterday’s match here:

• Speaking of legit pics, I can’t get over this one. Especially given that it was one of the more villainous college wrestlers.

Berry Tramel on #okstate’s 27-12 dual victory over No. 3 Iowa with a packed GIA watching: “Every year or two at Gallagher-Iba Arena, along comes a match that makes you think the refurbished cathedral wasn’t built too big.” https://t.co/YEDUN234sk

• With college athletic departments/universities always in need of more money, why they don’t have their coaches teaching a class/seminar (like Mike Leach below), I have no idea. Missed revenue.

• Finished this western fiction over the weekend – more sensuality than I prefer but a really interesting way of telling a story (from the perspective of the great-grandfather in his prime, his son in his, and the great-granddaughter in hers). Seems controversial in that it shows the warts of all involved parties (settlers in Texas, Mexicans, and plains Indians) but it was entertaining and enlightening.

• Watching Paul George split the double and teardrop over Gobert was art on Friday night. Love the confidence he’s playing with.