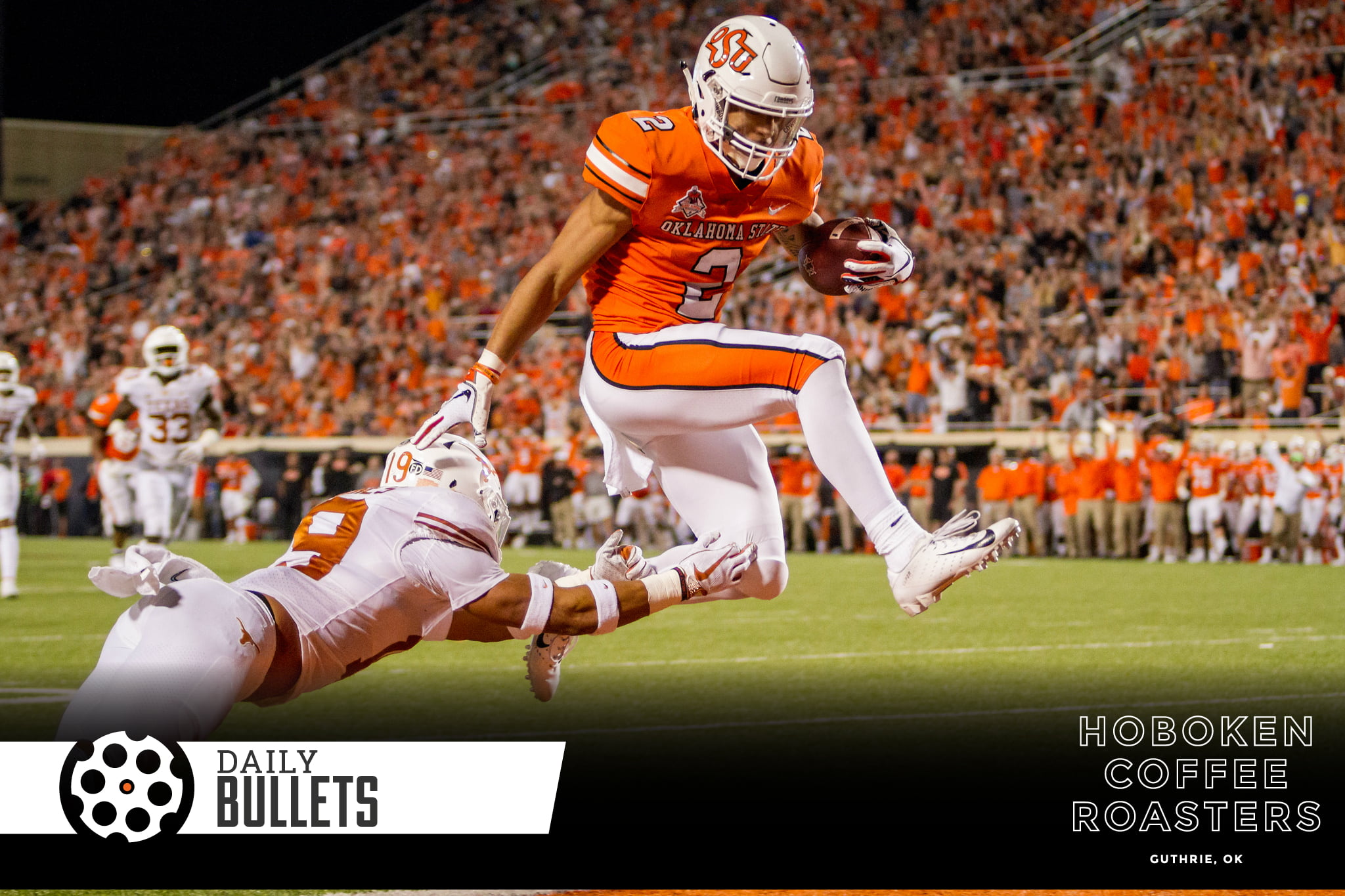 Here’s to hoping the Pokes show more life tonight against Texas Tech than the Bullets family, currently all down with the flu.

…College football — heck, all of sports — is about moments. In the end, the non-Alabama and non-Clemson teams are playing for third (which, whatever) and they’re playing for two or three or four legit moments throughout the season that we remember and talk about for years to come.

The funny thing here is that Mike Gundy hasn’t delivered many. He’s mostly beaten the teams he was supposed to beat and lost to the teams he was supposed to lose to. Last year’s team, as we all know, turned that idea on its head. And I’m with  Brian. I’ll take that magical Texas night and that bowl finale as a trade-off for losses against Kansas State and Baylor. [PFB]

I vote big moments, six-wins. I kept going back to a solid New Yorker piece on what their fans processed when their franchise traded off their star – their moments were watching their homegrown star develop into something great and feel a part of that. The below “bullet” looks at some that we have as OSU fans around the 2011 season.

The hard part is you have to risk disappointment but driving home after upsetting Texas and West Virginia were nights that make it worth it.

• Looking back on the 2011 season (I’d recommend reading most all of the OSU games on this list), the games against Kansas State and Texas Tech stuck out.

Another game in which this Bill Snyder had no business being as close as it was, and yet the Wildcats damn near pulled it out.

OSU would respond to this near-upset by beating Texas Tech — the team that had won in Norman! — by sixty points. [SB Nation]

That K-State game coming down to the end with Colin Klein trying to plunge in was fantastic. Then heading to Lubbock and housing Tech on a windy night by a million was a blast as well.

“Definitely go up to Stillwater and get a relationship with Coach Dickey and see what I can do,” Russ said and answered the question if Oklahoma State is still the school that best fits him. “Yes sir, definitely, nothing’s changed, nothing’s changed.” [GoPokes]

Being able to land a quality tackle is huge, keeping Russ on board can make or break the 2021-2024 line.

Wefald told the Mercury News that Gee has talked to the other Big 12 presidents about the proposal. But there are problems galore.

Some schools need seven home games annually, or least every other year. Under this proposal, most schools would play six home games and six road games a year.

So it’s not a plan that will be implemented. But it’s got presidents talking. That’s always a good thing. [NewsOK]

The Big-12 is uber-conservative with decision-making, ne’er the first adopter and only moving when it’s survival is at stake (too strong?) but as Tramel’s article pointed out – coming to a consensus, building unity, and at least talking about unique ideas is good.

• Fun story about the three Native Americans on the Cowboy Basketball team and their desire to influence for good.

• Great read about what it’s like to ditch your smartphone

• Solid thoughts on being good at telling time

• Glad to see Daniel Craig will be back for another Bond