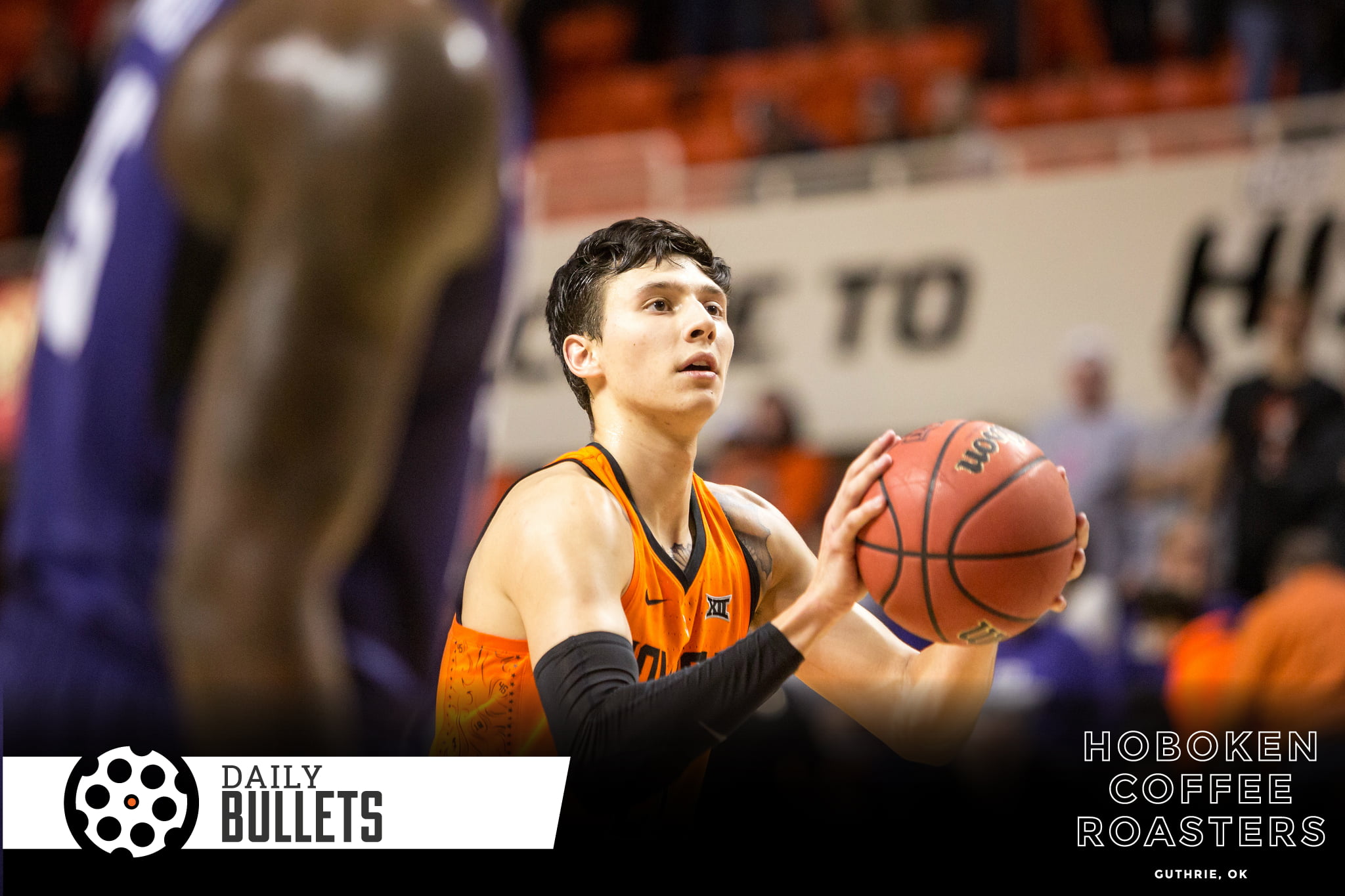 Steven Mandeville is down with the flu so I’m playing the Scottie Pippen role today and helping him off the floor.

• A little Justice. This from Scott Wright on No. 5’s size at the NFL Combine compared to other prospective RBs was pretty interesting.

Still, the former Oklahoma State star measured in as one of the smaller running backs among the 28 in attendance. Eight backs were shorter than Hill’s measurement of 5-foot-9 5/8, and Hill was the second-lightest player at 198 pounds. Florida Atlantic’s Devin Singletary was the shortest running back at 5-7 1/2. James Williams of Washington State came in at 5-9 1/2 and 197 pounds. He and Hill were the only backs under 200 pounds. [NewsOK]

I guess I never really thought of Justice as all that small, and as Kyle Cox pointed out, Hill is actually way up from his college weight.

Waters — owner of OSU’s wettest jumper — has been on a cool streak as of late averaging just 7 points per game over the last three (and scoring just 5 at Texas and a season-low 2 in Saturday’s blowout loss to Kansas State). But something happened late in the second half against the Red Raiders.

In one of the more underrated sequels in cinematic history, Hoosiers 2: Just This Close was released on Wednesday night and starred Lindy Waters as the former Milan High School superstar Jimmy Chitwood, reincarnate. [PFB]

It was fun to watch an actually competitive OSU squad agains a top-15 team. They might have emptied the tank for the rest of the year, but at least you know they’re not packing it in on Boynton. Maybe that doesn’t matter, but it feels like it does.

Wild stuff that we all just witnessed:

Dee Mitchell, who wasn't on the team two month ago, played all of OT against the No. 11 team in the country

A team with seven scholarship guys took said No. 11 team to OT

Wow… @LindyWatersIII hit four threes late in the game, including a buzzer beater to force OT against #11 Texas Tech

• Speaking of Justice, I thought his no-comment on Mike Gundy’s response to him leaving Stillwater was telling. Gundy, for all the things he does correctly, doesn’t seem to have fully bought into a more modern game of football where players are more empowered to do what they want to do when they want to do it.

But Justice was also asked about the exchange he had with Mike Gundy when he broke the news that he would not be returning for his senior season. “I’m [going to] keep that to myself,” Hill said laughing. “It wasn’t the best reaction.” [PFB]

• Revisionist history here as OU moves … wait … ahead of OSU in a revamped 2011 S&P+ rankings by Bill C.

The most visible change from the old S&P+ formula to the new comes pretty close to the top, where Oklahoma State now sits at No. 4, behind the No. 3 Oklahoma Sooners … which lost to OSU by 34 points late in the season. I’m sure that doesn’t look strange at all.

If nothing else, this serves as a reminder of how 2011 actually played out. OU started the season by walloping Tulsa (57th in S&P+), beating Florida State (10th) and Missouri (23rd) by double digits, and crushing Texas (16th), 55-17. OSU was awesome, too, but in a week-to-week progression, OU would have been ahead of the Pokes by a decent margin at the midway point of the season. So even though OSU was far superior in the second half of the year, they had some ground to make up. I guess. The optics here aren’t great, but oh well. [SB Nation]

This is a deep dive not meant for everybody and also a good reminder that statistics should be used in conjunction with (and not to replace) actually watching games.

• Eddie, finally? Bill Haisten thinks Eddie is in the HOF this year because of … Bill Self?

A source close to the Suttons says the family “feels good” about Eddie’s HOF candidacy. Maybe I’m being naïve, but so do I. I believe the political clout of Bill Self provides the impetus for the long-overdue induction of Eddie Sutton into the Naismith Memorial Basketball Hall of Fame. [Tulsa World]

I’m in “I’ll believe it when I see it” mode with Eddie and the HOF at this point.

• Sounds like OSU is legitimately in the running for this absolutely MASSIVE offensive lineman.

• I loved this on modern hoops and how the 3-point boom is only just beginning.

• Who is Omar? is the best thing I’ve read so far this week.