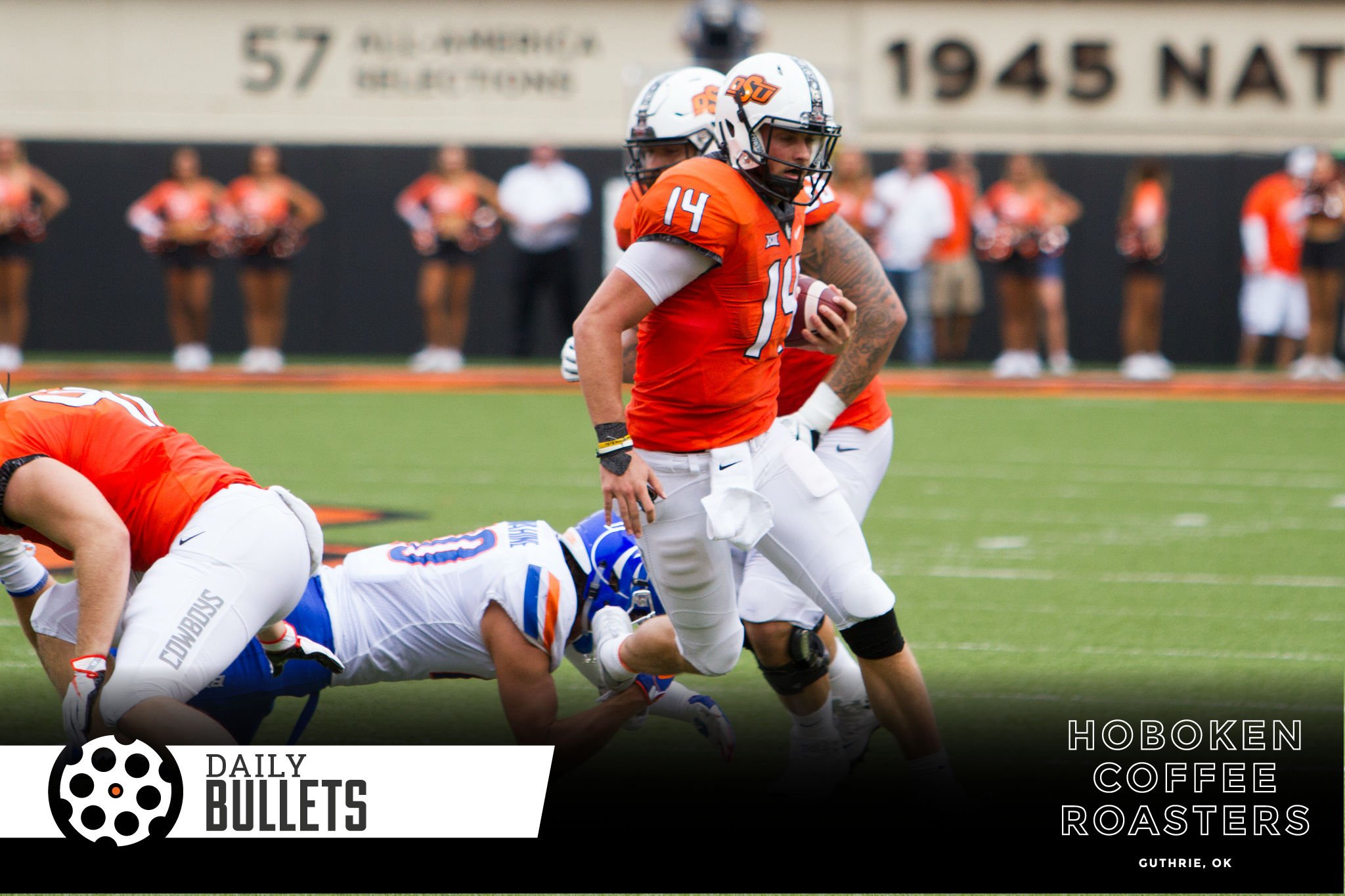 If you feel unqualified for your job today, just think – an NFL team hired Kliff Kingsbury to be it’s head coach after he was fired for going 35-40 over six years and making three bowl games. Chase your dreams, folks.

• I loved this look at “efficient recruiting”, it’s truly where OSU shines.

Oklahoma State is grouped in with teams like TCU, Michigan State, Washington and Stanford that produce at a high level without recruiting at a high level. All of these teams are extremely efficient with what comes in the front door. [PFB]

There’s a certain kinship among those teams and it’s possibly one of the best groupings you could throw Cowboy Football into.

• One of life’s biggest questions (not really) was just answered – what was Corndog’s purpose this year?

Corndog gave the Cowboys a buffer year to develop everyone’s favorite QB in Stillwater, Spencer Sanders and also to teach the offense to Hawaii grad transfer Dru Brown. Both will now battle for the role of handing to Chuba Hubbard and throwing to Tylan Wallace, two of the best skill players in the league. [Concerning Sports]

Because we didn’t see any Spencer Sanders (and the bare minimum of Dru Brown), we’re led to believe they both needed a year of marinating in the system. While they were doing that, “two of the best skill players in the league” got plenty of on the job training.

• It’s hard reading some of these quotes about the rise of Clemson and not thinking about the parallels with Oklahoma State.

Clemson won a national championship back in 1981 and has often played good football, but the program was not a perennial power.

“We weren’t a bad program,” says former athletic director Terry Don Phillips, “but we were just sorta there in the middle.”

Clemson went 20 years between conference championships until Swinney broke through in 2011. [MSN]

Can you imagine if Terry Don had hired Gundy before he left? Mercy.

Some other favorites include:

“I don’t think there’s any question that we’re unique,” Swinney says. “We are very unique. Alabama is Alabama; I mean, the tradition they have. … We’re not some blueblood of college football. We’re not the famous logo.” [MSN]

Even harder to read is this:

But they broke through in 2011, winning the ACC. A couple of years after that, they surpassed Florida State as the conference’s preeminent power. And now, Clemson has surpassed all but one other program in college football – with another shot to do it Monday. [MSN]

• Congrats to Rashaun Woods on the new gig.

• This piece by Marshall graciously links us all to the recent Big Country documentary – had to include as a Big Country fanboy.

• This thought on the purpose of books came across funny (but accurate) to me.

That’s great, because her rules are flawed. In her book, she claims “there is no meaning in [books] just being on your shelves.” She is wrong. The books you read convey meaning to you; the books you keep convey meaning to others. The best reason to keep books in your home is to show them off to other people. [Lifehacker]

The piece gets into how clothing projects values as well – I don’t think there’s anything arrogant about saying “this book and it’s thoughts are important to me” but there’s a fine line there before you get into “I wear glasses to look smart”.

• This piece on Russell Westbrook and being a fan describes to a “T” the experience of cheering for him (and has some crossover to cheering for OSU).

Being a Russell Westbrook fan is the emotional equivalent of playing basketball like Russell Westbrook—it’s spectacularly difficult, it takes willpower and imagination, it hurts, and if you’re not actually doing it, you probably can’t understand why anyone would try. When you are doing it, though, it seems to … not make sense, exactly, but reflect a kind of higher logic, detached from the utilitarian logic of the game. [TheRinger]