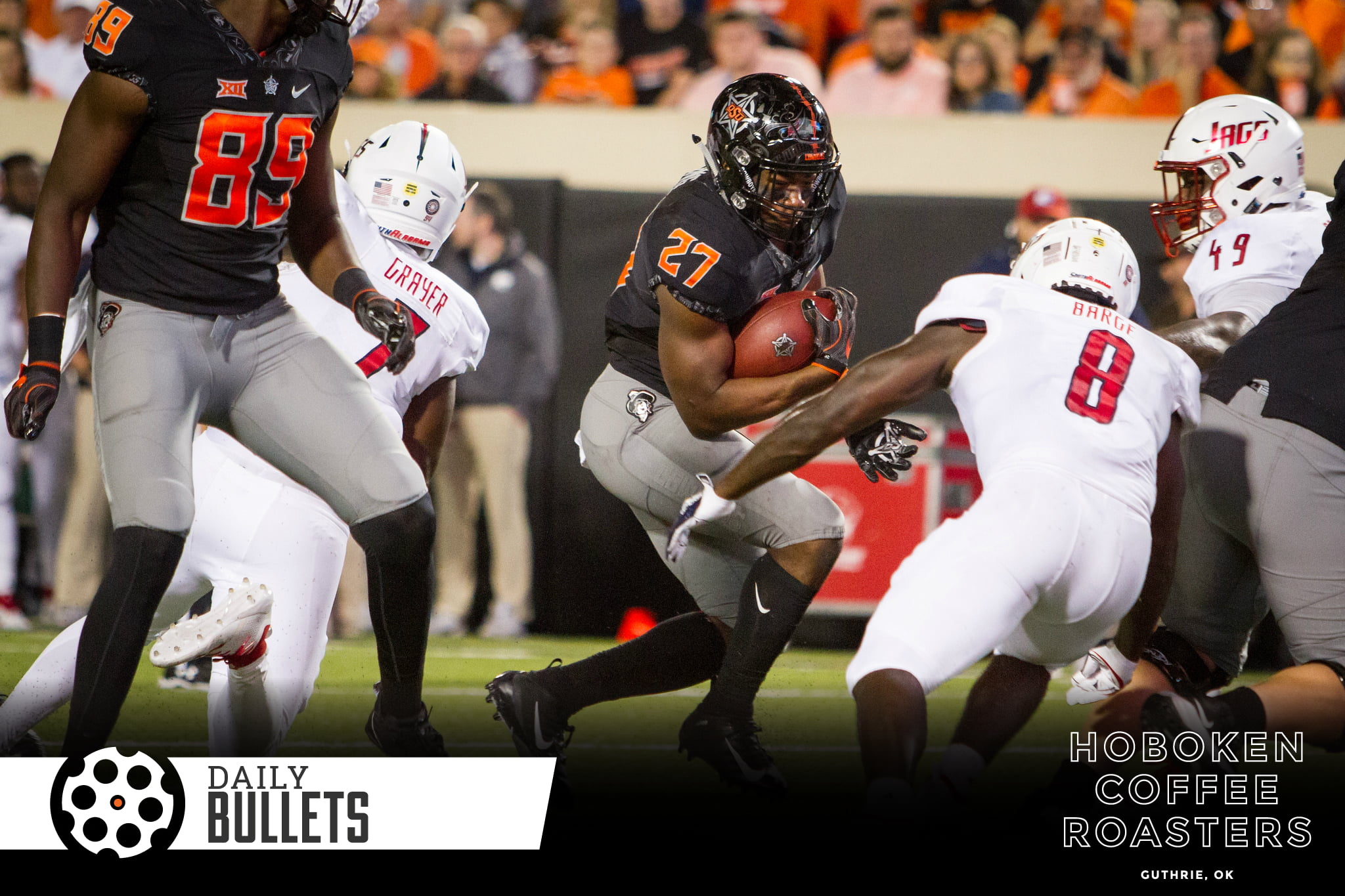 Baylor has officially become that unathletic kid on the playground who somehow beats you at everything, the obnoxious coworker that keeps getting promoted, the kid who gets the awesome toy before you do. There’s just something so unmerited about their seven-straight wins over the Pokes.

• When the Monken-to-Cleveland news broke, Porter’s report on Gundy’s pecking order for new hires came out – and Todd Monken was at the top of the list.

It might be even more confusing that Gundy, who has commented pretty openly that he likes obscure talent that he can keep, would want somebody with Monken’s profile back in Stillwater. “Obscure” does not describe someone who was one of 32 NFL offensive coordinators in 2018, but Monken and Gundy are old friends and have vacationed together. If there’s something Gundy values more than continuity stemming from obscurity, it’s trust. [PFB]

This evolution – preferring a candidate who was highly sought after – was encouraging. At least from my part, there was an underlying assumption that anonymity was the ranking quality of a candidate with high marks coming to those who had lived in the 74074 previously. Valuing competency over convenience was a great sign.

• After committing to the Pokes, you may be wondering, what can (Deondrick) Glass do for you? Well here’s some pros and cons from his recruiting evaluation.

— Deceptively builds long speed and can get rolling downhill in the secondary. Strong runner with good balance and body control. Can gain yards after contact. Good between the tackles.

— Patient runner who presses blocks to set up cutbacks in the toss and the stretch. Sells the counter and delayed handoffs with subtlety and nuance.

— Enters college with a lot of mileage on the tires (673 varsity carries).

— Virtually non-existent pass-catching experience out of the backfield. Has not been asked to do much blitz pickup in a run-heavy scheme. [GoPokes]

The recruiting analyst gave him an NFL comp – Chris Carson. Patient runner between the tackles, hard to bring down and an absolute load in the secondary. He should be fill in perfectly to that “60%-30%-10%” portion of the running back workload perfectly.

Don’t be surprised if he has one of those JD King @ West Virginia games though.

• Can you imagine if Mike Gundy taught a class at OSU?

”Here is a draft overview of Insurgent Warfare & Football class we may teach in Mar-Apr. Unconfirmed right now. If we do teach we are interested in two class assistants – ideally a WSU student veteran and/or potentially interested in a coaching career.” pic.twitter.com/5S2LfnD48Y

Odds are it would be a horticulture or ag engineering course are pretty high – sign me up for an HR course that Gundy offers.

• Dabo Swinney spoke glowingly of the impact former OSU AD Terry Don Phillips had on him and Clemson.

“I just love him,” Swinney said when Phillips retired. “He is a great man, who is a man with class, integrity and he has vision. He is a man with some guts…he had the guts to hire me for this position. It was a special moment when I was able to hand him that ACC Championship trophy in Charlotte.

“What he has done with the facilities in all our sports has been incredible. He has given us a chance to compete at the highest level and has changed the playing field here. We just moved into a new dining facility in the West Endzone and next year at this time we will be in a new Indoor Practice Facility. They ought to name it after him.” [WholeHogSports]

While Mike Holder will fairly be lauded for his impact on OSU sports (give me the Holder Athletic Village), Terry Don Phillips was the Les Miles to Holder’s Mike Gundy.

• Jordan Sterns appears to have surfaced – playing football in the Alliance of American Football:

• This was a great recap of the 2018 college football season – these seasons just fly by. Are September through November the fastest months of the year?

Fox gave up their TV rights to the odd-numbered years for the Big 12 football championship game.

In a report from the SportsBusiness Journal that surfaced on Monday, it seems Fox has declined to pick up the rights to the Big 12 Football Championship Game in odd years as the conference seeks “at least” $20 million from a TV partner to air the game. SBJ goes on to note that the league has been talking to a number of media companies about the 2019, 2021 and 2023 games after Fox’s decision, which comes just two years after the network ponied up some $25 million for the 2017 game. [NBC Sports]

I’m not sure if it’s your “premium game” that you try this on – but the Big 12 making headway into the streaming markets would be an innovative move worth checking into.

• This on priorities and e-mails was good. There’s a line to toe about which priority your neglecting – your job or your relational obligations. How folks work from home and balance those priorities amazes me.

• This faith-based read on dealing with shame changed my day yesterday – absolutely worth your time.

I can’t stop watching this Luka Doncic clip. There’s gotta be some sort of witchcraft going on here.

well that’s one way to split the defenders pic.twitter.com/fJIwXdNX8V