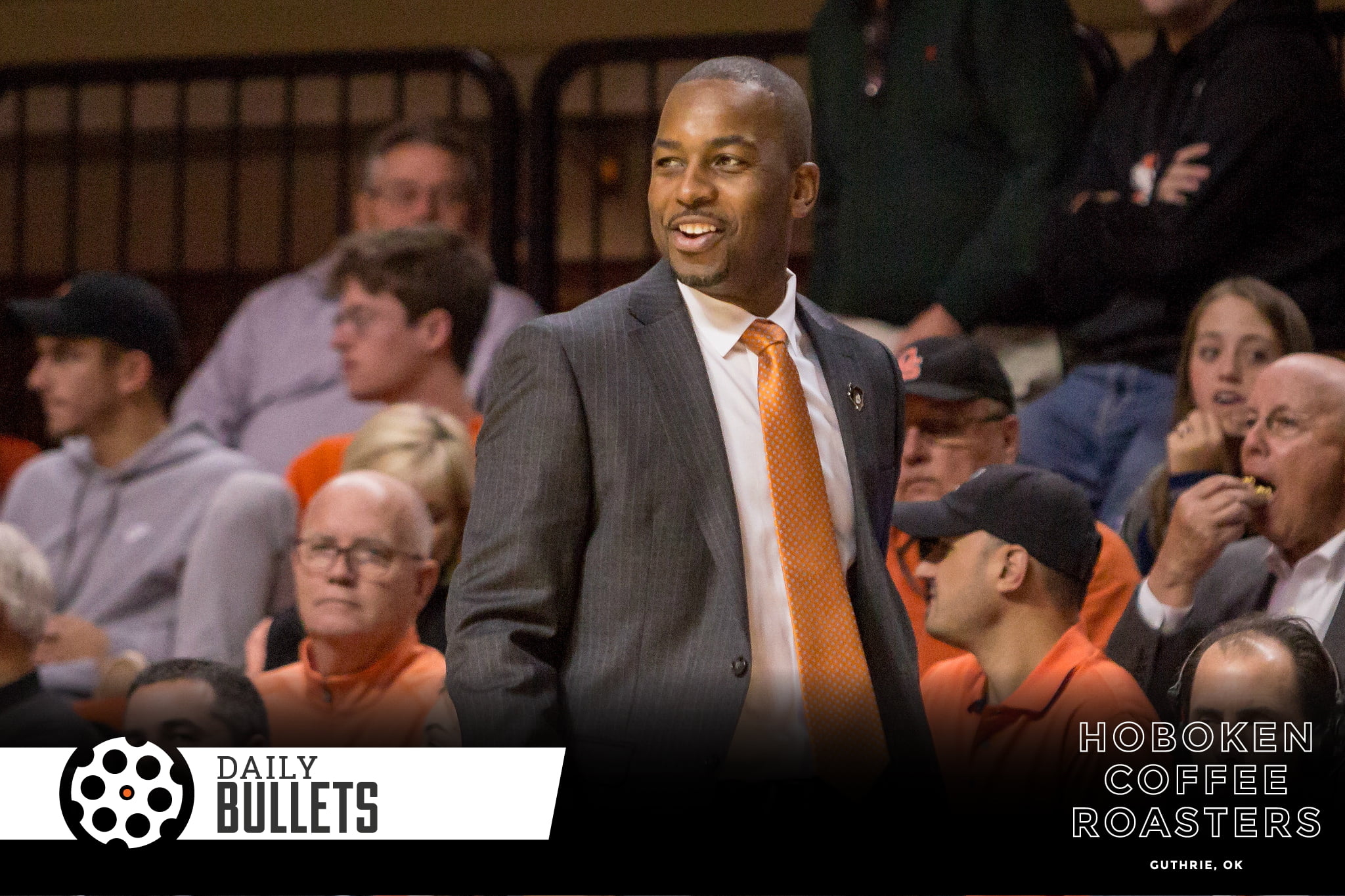 It hasn’t been much of a birthday week but happy birthday to head ball coach Mike Boynton – may his day be full of folded thin crust pizza, four-stars verbally committing, and high-top Nikes.

• Vacancy on the Cowboy Bench
• Glass = Thurman
• Most watched games

• PFB ran a great piece checking all the angles on the transfer issues under Boynton giving more than enough praise for running a tight ship. But the other angle is just as true: recruit guys who can stay around.

Maybe he has unrealistic expectations of college freshmen and sophomores. But given the stories we’ve heard about why the recent trio may have been booted, I kind of doubt it.

And while I agree that laying a foundation and setting a precedent and having standards are all important things (as Boone pointed out recently), it’s also fair here to say that Boynton has whiffed on a number of guys. Recruiting isn’t just about finding talent, it’s about finding guys who can live up to the standards of your program, especially when you’re the one making those standards to begin with.

The premium on Mike Boynton is he’s one heck of a likable guy and a solid recruiter. Those two things are intertwined but with those strengths come weakenesses – namely inexperience. I’d be willing to bet he’s learned something form the plethora of players he’s had to kick off his team and will only be a better coach for it.

• Enjoy these optimistic words about the Cowboy Baseball pitchers for the rapidly approaching spring season.

I’m very high on that Oklahoma State pitching staff, which I think gives them a chance to get to Omaha. [D1 Baseball]

• GoPokes had a different Deondrick Glass comparison than I had previously heard: Thurman Thomas.

I’m going to to tell you that our commitment comparison for Glass will be Thurman Thomas. I went back and watched some Thurman video after watching Glass and it’s close. I’d love to see some of their runs side-by-side because they really compare… Glass prefers Barry Sanders and he compares to Barry as well, but his power moves and breaking of tackles reminds me so much of Thomas. [GoPokes]

A patient, strong, tough-to-bring-runner with solid top end speed seems like a nice thing to say about a running back.

• With Lindy Waters and Isaac Likele bearing the brunt of the January Exodus, what does life on the wings look like for the Pokes?

I would expect to see Curtis Jones start taking some of the load in that department. It’s not his traditional role, but he could become someone trusted to facilitate more than he has.

Jones, along with Duncan Demuth and probably Luke Majors, are going to be asked to do a lot more than they have been, especially when it comes to producing numbers. Oklahoma State just lost 13 points, 5.8 rebounds, and 2.6 assists per game. [CRFF]

These are the conversations (“let’s get the walk-on some run”) and the numbers (13 points, etc) that we’re having about a team that was already thin.

• See if you can guess Cowboy Football’s most watched games of 2018 then look at this article to see if you were right.

• Of course, Tylan Wallace is viewed as the number one returning receiver in the Big 12.

• This New Yorker piece on decision making had a great nugget that described the experience of parenting well (please excuse the drug reference).

Before having children, you may enjoy clubbing, skydiving, and LSD; you might find fulfillment in careerism, travel, cooking, or CrossFit; you may simply relish your freedom to do what you want. Having children will deprive you of these joys. And yet, as a parent, you may not miss them. You may actually prefer changing diapers, wrangling onesies, and watching “Frozen.”

These activities may sound like torture to the childless version of yourself, but the parental version may find them illuminated by love, and so redeemed. You may end up becoming a different person—a parent. The problem is that you can’t really know, in advance, what “being a parent” is like. [NewYorker]

• This was a pretty good high-level look at the Dallas Cowboys off season.

• Easily one of the most convicting, encouraging faith-based articles I’ve seen – highly recommended for Christian husbands.