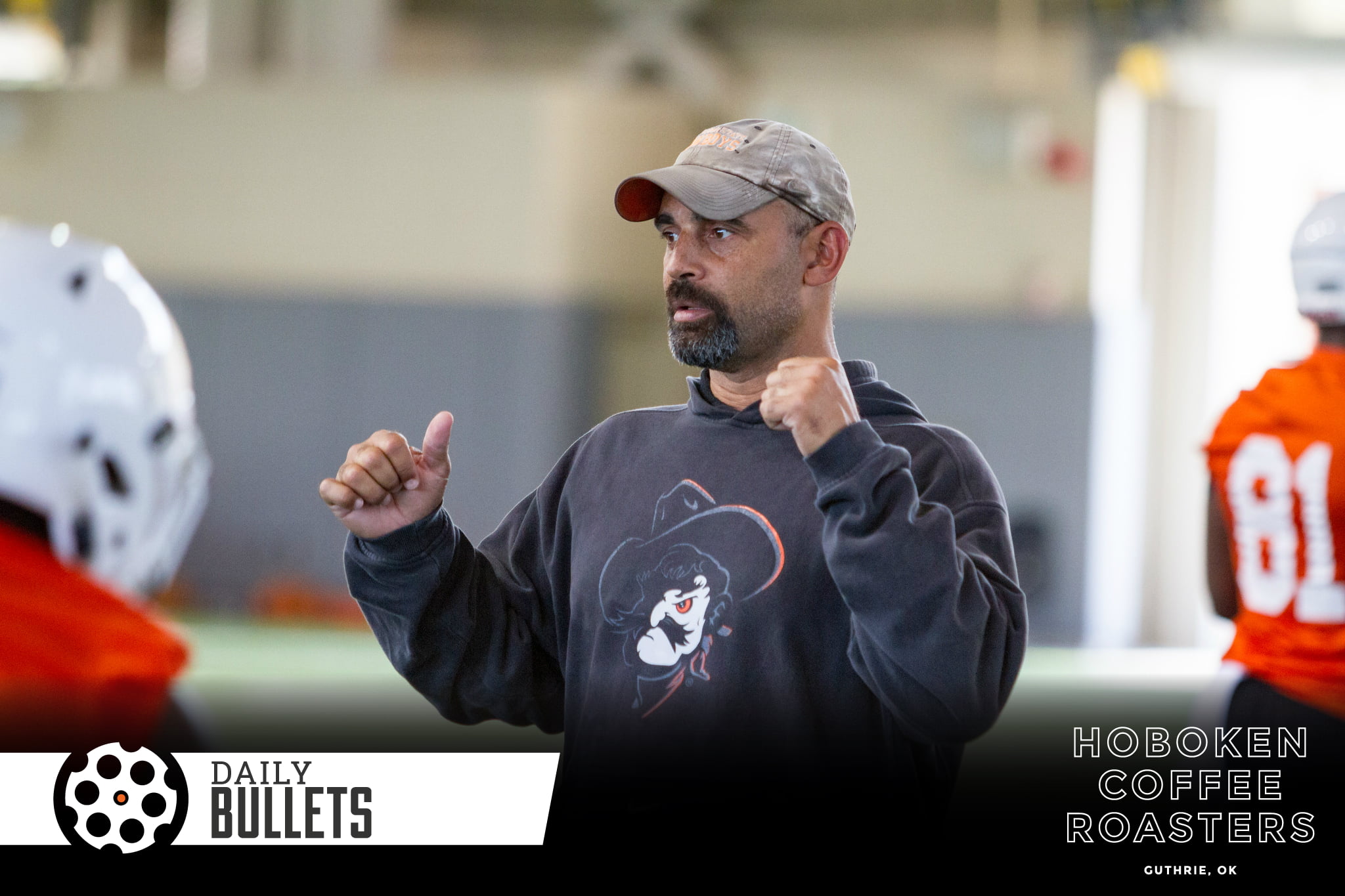 PFB turns 8 years old tomorrow. Here’s the launch post from Jan. 21, 2011. Little did I know what was about to take place.

• Jenni Carlson on why Kasey Dunn should be the guy in STW.

Think about this past season. OSU lost one receiver to transfer and four others to injuries that kept them out all season or for an extended period. That’s five receivers who would’ve contributed, but the Cowboy catchers didn’t miss a beat. That goes back to how Dunn recruits, then develops players. Sure would be fascinating to see how those skills might percolate around the entire offense if Dunn was the coordinator. [NewsOK]

I don’t think the premise is wrong, but I do think figuring out whether a guy should just stay in his lane or whether success in one area portends success in another is one of the hardest things about running a team (and probably a business). Also, RA lays out the background and a small case for Dunn here.

• Marshall Scott’s five thoughts were really good, and I didn’t know Jones’ 3-point percentage was this high coming into the game last night.

Thomas Dziagwa and Curtis Jones, two guys whose biggest assets are their 3-point shooting, were a combined 2-for-16. There’s not too much to say about that, other than it was a rough night. Dziagwa entered the night a 45 percent 3-point shooter on the year, and Jones shot 37 percent from deep, so the duo’s 13 percent will likely be an outlier at year’s end. [PFB]

I hate to reduce OSU basketball games to simply whether OSU shot 3-pointers well, but maybe it’s just that simple. It has been of late, and maybe more so now that Mike Boynton has booted the trio of Jones-Weathers-Calloo (great law firm name, btw).

Also I taped a postgame show, which you can listen to here. Lastly, I like the Gatorade towel over the shoulder look from Boynton.

"I'm not backing down. I'm not turning my back. I'm digging down deeper. Hunkering down harder." ??? #c2e #okstate pic.twitter.com/kEfun9IDHP

• Mark Cooper reported on one of the players who tried out to walk on the OSU basketball team, and this made me laugh for some reason.

Before Hester could ball, he needed to take a physical and a sickle cell test. To register for tryouts, a student needed to have proof of both. There may never again be such a high demand on a single day for sickle cell tests at University Health Services. Hester said he was told about 30 people came through. [Tulsa World]

One source told me the whole thing was kind of a mess, which … I think should be expected when you’re down to eight scholarship guys and asking guys from the Colvin to come show off what they’ve got?

• Jordan Brailford had a great East-West game. Corndog, not so much.

Brailford got his second sack of the game in the third quarter when he correctly read boot by Stick and caught up to him and put him on the ground. Then later made another huge play when Brett Rypien of Boise State bobbled a handoff that bounced off Pittsburgh running back Darrin Hall and onto the turf where after one East defender muffed the recovery, Brailford controlled the ball for the fumble recovery addition to his stats. [Go Pokes]

Corn tossed two picks, although apparently only one of them was his fault. This is the type of environment I’d expect to see Brailford thrive in, but I’m pretty intrigued by the idea that Corn could get run at the next level.

• Good stuff here from Guerin Emig on the transfer culture.

Coaches can bellyache or power-play every day of their million-dollar lives, and it isn’t going to change the fact that players are going to transfer. They’re going to do so more than ever now that the NCAA has established a database — you know it as a “portal” — designed to give them more leverage in their quests for more favorable situations. [Tulsa World]

Gundy especially has seemingly simply complained about the system rather than leveraging it to his advantage. That’s disappointing for somebody who gets paid $5 million a year to do everything possible to make his team as good as it can be.

• Alex Dieringer is headed to Russia.

I’m am headed to Siberia, Russia to wrestle in the Yarygin!! Excited to go out there and give everything I have to bring the gold back to America! I am so blessed to travel the world and represent my country.????

• Highlights of the Boones from earlier this week.

• Loved this on the old blogosphere compared to today’s social media.

• Guilty here. Too much chocolate, not enough oxygen.

• I watched the Netflix documentary on Fyre Festival last night, and could have watched 10 more hours. Must see.