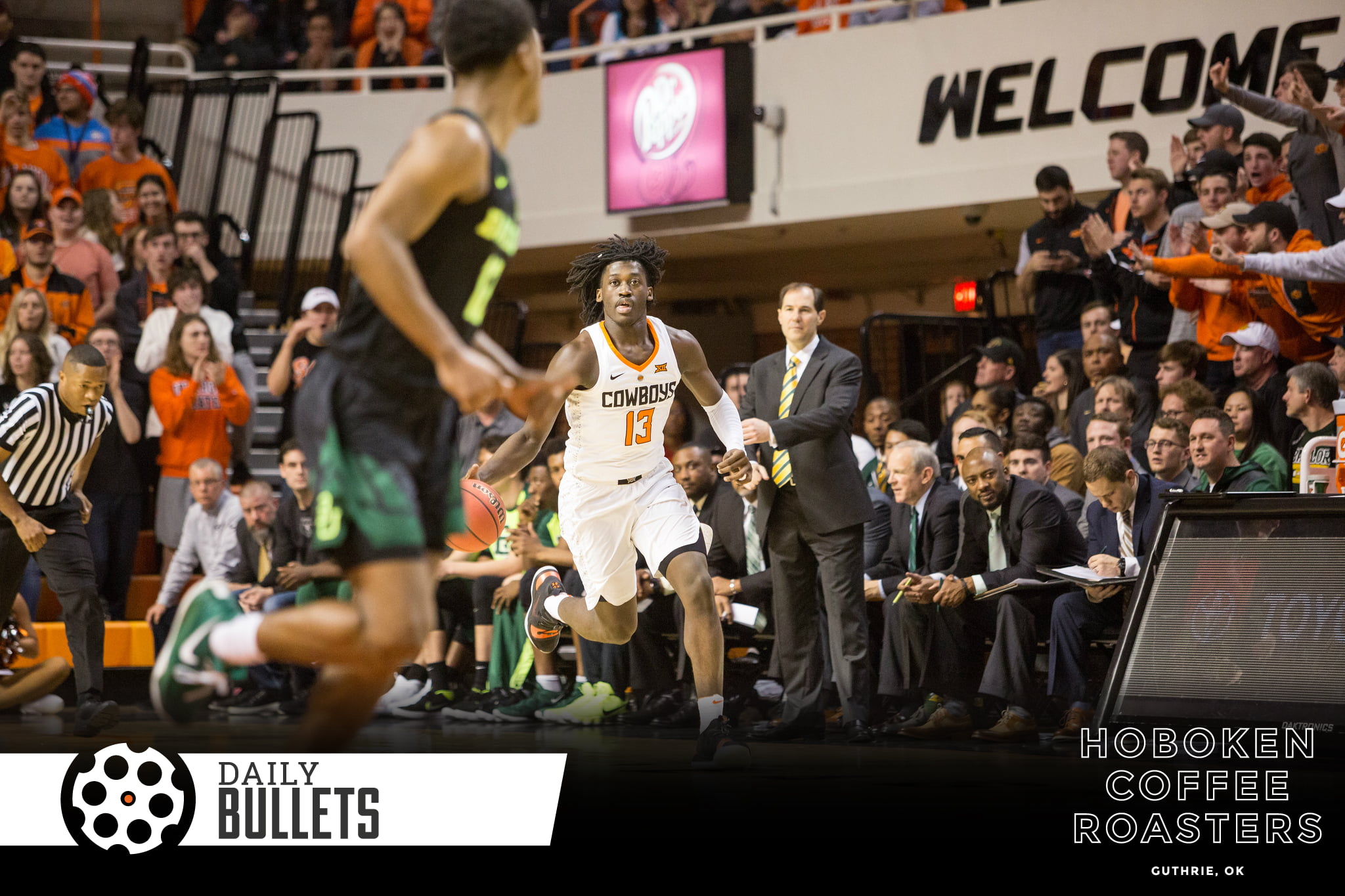 Question of the Day: after watching the AFC/NFC championship games, is it more fun to watch those games as a fan of a participating-team or as a general football fan?

• After losing four players, whose minutes got a major adjustment at Iowa State?

But it’s worth remembering that many teams do survive with seven-man rotations. The broadcasters did a good job of that by pointing out that Iowa State used only seven in its win over Texas Tech earlier in the week.

Oklahoma State’s box score reflected that yes, you can manage your way through a game with a limited bench.

A key point on those tight rotations is teams are using limited numbers because they’re generally maximizing what they have in those limited players – getting the most out of their talent. OSU is playing seven guys (as opposed to seven dudes) because they have to.

• 2018-2019 was never set to be a two-weekend tournament run for Cowboy Basketball, the big dog recruits are set to arrive this summer. Will losing a few players help or hurt that?

Still, there are better days ahead.

The 2019-20 season always figured as the launching point of the program, with a transformational recruiting class on the way. And that remains in play, perhaps more so if Boynton and his staff can find a couple more quality players to add to the mix. [GoPokes]

If your roster isn’t chocked full with NBA-ready talent, it’s essential you get guys in the system and develop them. Making runs with upperclassmen is how you win in Stillwater, it’ll be crucial to get some players to that stage in their careers.

• Mike Boynton has been the king of late cycle recruiting and shouldn’t have trouble filling empty spots.

Four of the six players in the Cowboys’ previous recruiting class committed in April and May, so Boynton should have no issue operating later in the recruiting cycle.

It’s plausible he pursues a graduate transfer with one of the two openings, as he brought in one in each of his two years as the Cowboys’ coach. But unlike 2017-18 addition Kendall Smith, Mike Cunningham’s time in Stillwater lacked highlights; he left the program last week while in the middle of a disciplinary suspension. [NewsOK]

I’m not sure if he’ll go grad transfer or freshmen with this spot or two that will remain but you gotta believe that guy has been working the phone lines and working his tail off.

• Chewing on where the wins will come from can be a bit of an exercise in futility says Marshall Scott.

So in conclusion, who knows? Will OSU win again? Almost definitely. Are there teams OSU has a higher probability of beating than others? Sure, but with how wild Big 12 basketball is, I wouldn’t be surprised if the Cowboys sweep Kansas again just to fall to Baylor and West Virginia at the end of the season. [PFB]

Sure – playing teams like South Carolina and OU in Stillwater give the best chances at a win, but the unpredictability of league play will keep us guessing.

• It seems like an NFL-team could make room for this guy.

.@CowboyFB's Jordan Brailford comes screaming off the edge for the SACK ?

• Pokes added a preferred walk-on from Jenks on Friday – swiss utility knife type of guy but qualified as an “athlete”.

• Finished this read on hustling/blogging, good quick read on monetizing your passions.

• Watched this 70’s-era Vietnam War movie over the weekend – hard to comprehend for a primarily WWII guy.