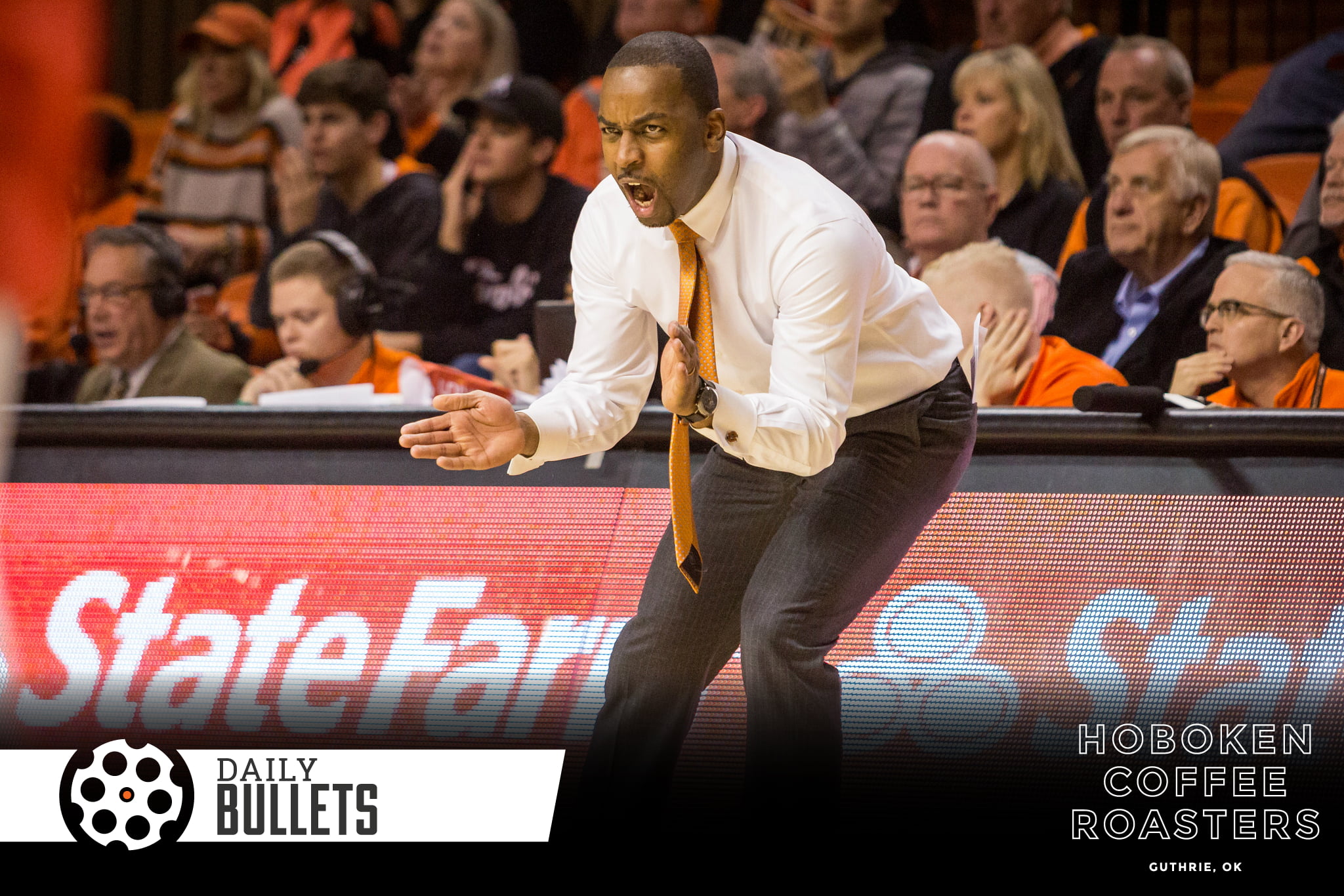 I”m convinced Bullets III will watch Bama-Clemson games when he goes to OSU (class of 2064). Pokes got the Horns at GIA tonight at 6 p.m., saw em’ off.

My man Southwell with the truth here:

• While conference commissioners and other players are more and more interested in an expanded playoff, university presidents play a massive part in that decision and have their opinion set for now.

“As far as expanding the number of teams in the playoff, it’s way too soon – much too soon – to know if that is even a possibility. It’s fair to say the speculation about expansion has outdistanced the reality of what the commissioners and the presidents have discussed. If a decision were to be made down the road, the presidents would be the ones to make it, and we are not there. [NewsOK]

The biggest difference in an eight-team and a four-team is what you’re trying to accomplish – a four-team makes sure to confirm the best team. The eight-team gives more “fairness” and let’s “everyone” have a chance.

• Porter ran through his five predictions for 2019 and smart money has Boynton landing a top 20-level guy that he shouldn’t.

The Class of 2019 is all sewn up, but 2020 is wide open, and Boynton has offers out to seven of the top 20 guys. It would be a coup considering only one of those seven is from Texas or Oklahoma (RJ Hampton), but the way Boynton has been trending in the crootin’ game, nothing would really surprise me at this point. [PFB]

• When looking at the incoming recruiting class and those who will be presented with an opportunity, it’s hard to get past defensive end Trace Ford and possible immediate impact.

“I think he’s gonna be a guy that can get off the edge and really put pressure on the quarterback. And he’s never had a chance to dedicate anything to his body yet, based on being a three-sport guy, which is awesome. Very competitive. Very intelligent. Looking forward to getting him here.”

All the things that excite Gundy terrified high school offensive tackles when Ford was lined up across from them.

The 6-foot-3, 230-pound Ford is as quick off the ball as just about any player in the state. [NewsOK]

There’s something about Trace Ford that just screams Jordan Brailford to me.

• When looking at the Pokes in relation to their Big 12 peers in basketball, there’s a bit of truth in the below remark about the way this season could trend.

It’s going to be hard for these Cowboys to stay at .500 or better this season unless some of this young talent comes along fast. And, even at that, they were in both of their games this week, which shows the Cowboys have just enough talent to make life difficult on any Big 12 team. [HCS]

Mike Boynton team(s) in their short history have outperformed what’s expected. Another low bar is being set but who would be surprised if they don’t exceed it.

• AKA Big 12 championship may be open for business. Self just lost his best low post presence and his other threat is on NCAA “house arrest” while eligibility issues are worked out.

"This is a crushing blow…" @GoodmanHoops with the latest on Udoka Azubuike's season-ending injury and what lies ahead for @KUHoops. #RockChalk pic.twitter.com/jHXFPjS07U

• Listened to the podcast interviewing the recently-passed CEO of Southwest Airlines, what a guy. How he perceived opportunity and approached life was inspirational.

• I’ve been thinking about the books I read in 2018 and wanted to give a quick rundown of my favorites:
1. Hillbilly Elegy by Vance – I cheated a bit as I finished this in late 2017 but looking at how the midsouth/midwest raises families brought incredible reflection and understanding.

2. Beartown/Us Against You – What a series. Never before have I seen the concept of place and sport and how they intertwine so profoundly displayed. A series I’d highly recommend.

3. Grit by Duckworth – It could be recency bias but how effectively she lays out perseverance, dedication, and effort impacting all areas of life was terrific.

4. Boom Town by Anderson – As a native Oklahoman, seeing what outsiders who really immerse themselves here say is always fascinating.

5. Prodigal God by Keller – This won’t shock you but I’m not the headiest of readers and it was a delight to chew on this read by Keller the intellectual. A shorter faith-based read I’d recommend.