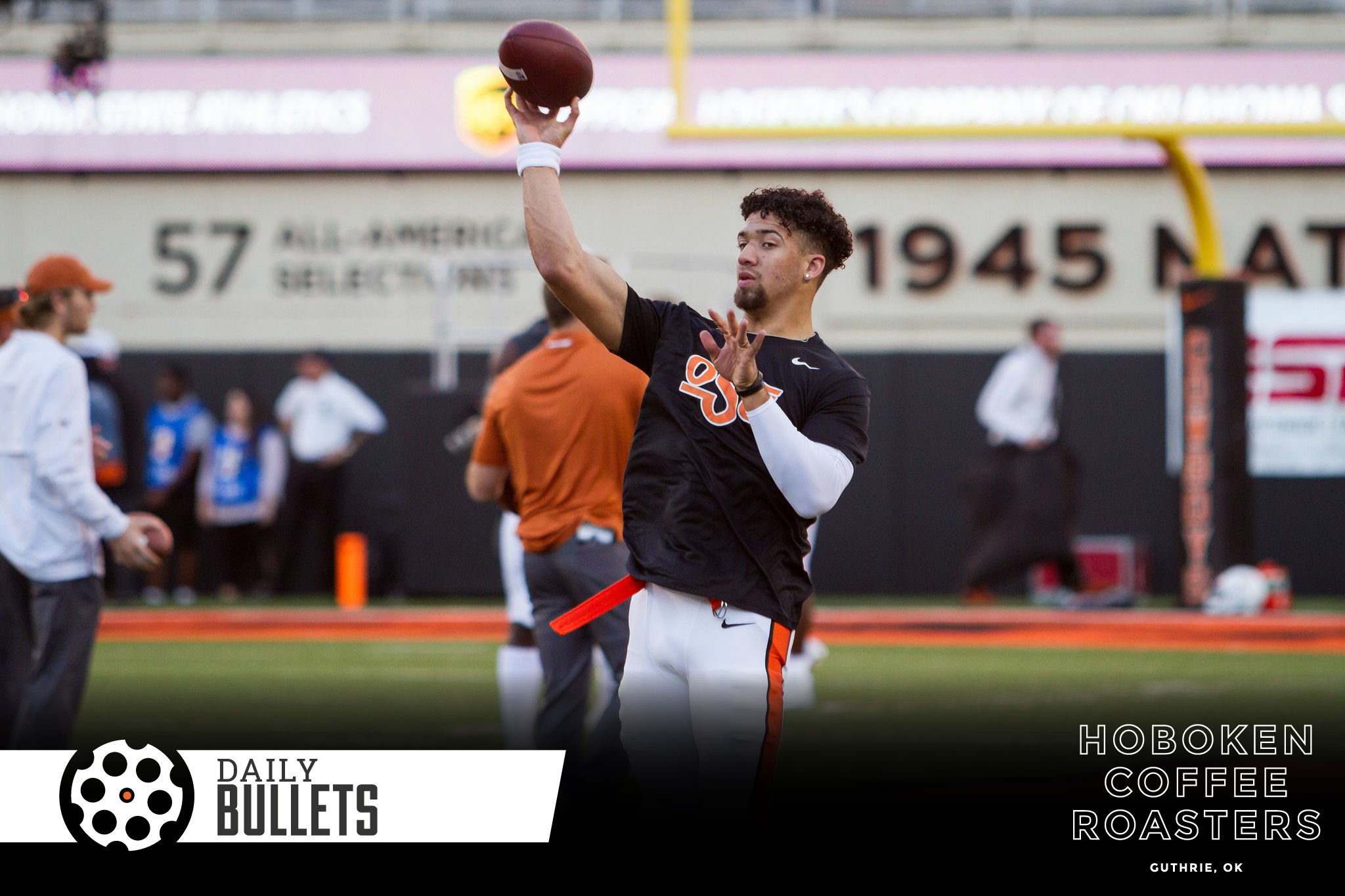 We don't know what @LindyWatersIII ate for breakfast this morning, but we want him to keep eating it. He's got a career-high 4⃣ makes from long range so far tonight. (It's only been 16 minutes.) pic.twitter.com/iDjQ9y4CIT

• The legend of Spencer Sanders continues to grow as yet even more reports come out of his “rocket arm”.

When a Gundy guest watched a Liberty Bowl practice at Christian Brothers High School in Memphis, he asked, “Who is No. 3?”

Spencer Sanders, the guest was told.

After seeing Sanders fire precise fastballs during a passing drill, the guest remarked, “This guy has a rocket of an arm.”

One longtime observer of OSU football rates Sanders, even as a freshman, as having the second-strongest arm of all Gundy-era quarterbacks. Brandon Weeden would be No. 1 on the observer’s list of arm-talent Cowboys. [TulsaWorld]

Knowing reports like this would trickle out, I’m starting to wonder which would garner more interest: a tantalizing package spread out over four games or letting the imagination run wild, Bobby Reid-sized dreams actualized?

• Mark Cooper had a great interview with an Ohio State state and had some great comments on why Mike Yurcich didn’t catch on with all of the OSU fanbase.

His first two offenses ranked 37th and 85th, so he didn’t light it up right away, either, and I think that was a factor. And there were some questionable lapses on offense this season that incensed the critics. For example: Star running back Justice Hill received only 11 carries in an inexcusable, 12-point performance at a lackluster Kansas State team this year.

It also took a little too long for the game plans to cater to Cornelius’ strengths, which differed from Rudolph’s. When Yurcich got it right (see Texas, West Virginia and Missouri this year), the offense was electric. But when you hold it to the Monken standard (OSU scored 30-plus points in 25 of 26 games in 2011-12), it fell short for some. [11 Warriors]

The transition from an NFL quarterback to a fifth-year walkon would hardly be smooth for anyone but I agree it took quite a while… especially for someone who had been in the system for a half decade like Cornelius.

• Lindy Waters was responsible for a clutch moment in the second half that carried the Pokes to their first Big 12 win this year.

Texas held Oklahoma State without a basket for nearly seven minutes, and the Cowboys, in search of their first Big 12 victory, had missed seven straight shots in that span. But with his first and only attempt of the second half, a buried 3-pointer, Waters ignited the Gallagher-Iba Arena crowd and extended OSU’s lead to nine, a large enough margin for the Cowboys to outlast the Longhorns, 61-58, on Tuesday night. [TulsaWorld]

• When Mike Cunningham said happy trails to OSU he took a couple of key things from this OSU team that his presence offered.

The on-court ramifications of his leaving are the most obvious to point to — he was a sharpshooter from 3 capable of, potentially, filling a role as a secondary scorer in OSU’s system. [PFB]

Leaving with his college basketball experience was tough but taking away three-point shooting and a secondary-scorer in a team full of them isn’t ideal.

On the plus side – it should be a net positive while younger players will be able to capitalize on the extra minutes.

• Todd Monken talked with the New York Jets yesterday after reportedly finishing as the runner-up on the Packers job.

• This Kliff news just floors me. I get that the NFL is running college offenses and Kliff coached Johnny Football and Mahomes but still… I’m not sure how you sell the move to a billionaire owner. Most impressive landing spot after getting fired by a lower-tier Power Five job goes to…

Per sources, Kliff Kingsbury is finalizing a deal to become the Head Coach of the Arizona Cardinals. @nflnetwork @gmfb @NFLonFOX

•  Here’s a hot tip on discipline from AoM:

Recent studies on willpower have shown that, contrary to the popular belief that people with more self-control are better at exercising discipline, they in fact rarely use this capacity at all. Instead, they minimize the number of temptations they experience in their life in the first place, by 1) pursuing habits they really enjoy… and 2) structuring their environment in ways that remove the need for willpower.  [Art of Manliness]

•  Newport had an interesting point about the transition into smartphones from the mid-2000’s:

It’s in this context that Apple began developing the iPhone: a smartphone conceived from the start as a consumer lifestyle product. The reason people lined up outside Apple stores for this device’s initial release was not because they cared about getting more done on the go, but because they wanted to be a part of the shiny new chrome-case digital culture it represented. [Study Hacks]

• This faith-based piece on Purdue superfan Tyler Trent and what drove him just wow’ed me.