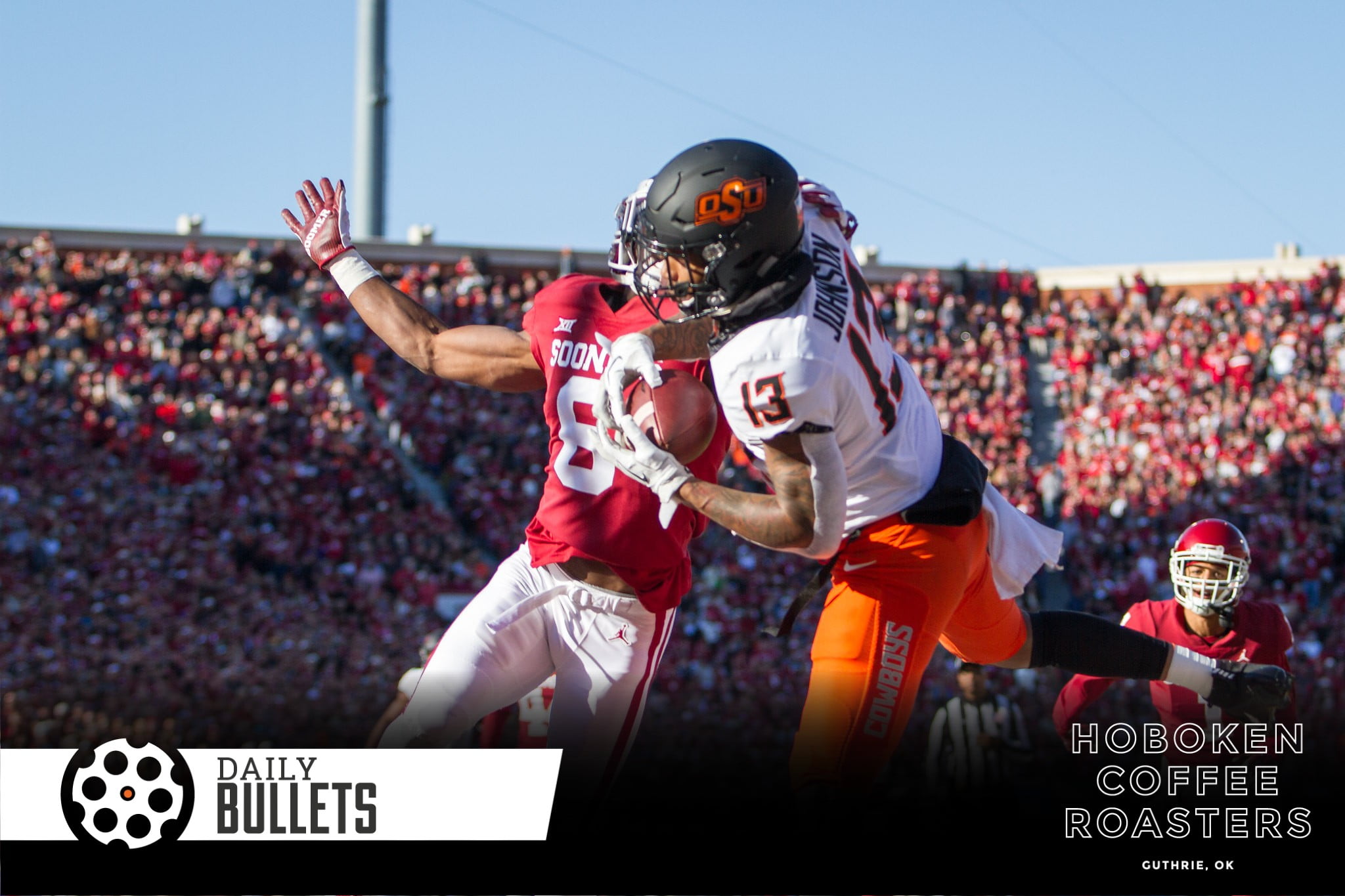 Don’t forget to take the PFB Survey for 2019 (this isn’t the OKC Dave survey) – the results will help us shape the site.

• As legislation in California advances concerning the ability for college players to profit from their likeness and name, former Cowboy Russell Okung weighed in on the topic before the California legislature.

(State senator Nancy Skinner) was joined at the meeting by Los Angeles Chargers offensive lineman Russell Okung among other advocates for the bill. Okung told the committee the NCAA’s treatment of athletes was exploitative, oppressive and analogous to how prisoners are treated — provided room and board and allowed to work without a chance to be paid fair market value for their services.

“Why does a free-market system work for everyone but the student athlete?” Okung asked. “It’s about basic civil liberties and repressive measures that still exist today.” [ESPN]

• Ultimately, this one quality will be what Sean Gleeson (not Mike Gundy, not another offensive position coach) will be judged for most.

We’re back to the development of OSU’s quarterbacks, the most important of Gleeson’s job requirements. This will be easier to judge once we see (Spencer) Sanders and/or (Dru) Brown in action, and we discover just how effective Gleeson has meshed their skills with his system. [TulsaWorld]

I may be on an island but I hold that Gundy bears a major weight in playcalling often wielding veto power on a micro-level and shaping in the narrative of direction. Why else would you consistently feel comfortable hiring unproven guys in their early 30’s? I hold he’s hedging his bet by hands-on mentoring.

But QB development? That’s all on the OC. How he trains him, teaches him, helps him build confidence.

• Tyron Johnson reflected on how being a five-star recruit did (or didn’t) impact his career his so far.

Yet Johnson did not hear his name get called last April during the NFL Draft. He signed with the Houston Texans as a free agent and is currently battling for a roster spot.

“I felt like stars didn’t matter,” Johnson said. “I earned the stars, but it didn’t matter. In college I had to make plays. I went undrafted and I have to make plays. You can have all the stars you want, but I still went undrafted. I did what I had to do to fit on each team, so it doesn’t matter how many stars you have as much as how you adapt to each team you go to.” [Rivals]

It’s sort of unusual for OSU to get to see this play out as less than five five-stars have graced the campus.  You saw flashes the brilliance of Tyron’s talent (think Bedlam 2017) but for some reason, he didn’t get drafted. Stars/sheer talent doesn’t mean everything I suppose.

• In the world of sports fandom, this is pretty wild. You sort of expect that kind of thing with a Texas Tech fan more than a Kansas City fan, right?

This fan got a “champ stamp” tattoo of Pat Mahomes and the QB signed it ? @brgridiron

•  Enjoyed this interview with “Tyra” from Friday Night Lights

I get the narrative around the picks losing value but there aren’t a lot of options for Westbrook suitors – Herro and Winslow are two assets… and maybe Presti can get a later pick when Russ is aging too.

This deal makes sense for everyone.

The Mavs end up with Dragic pic.twitter.com/DLUdkQevMx