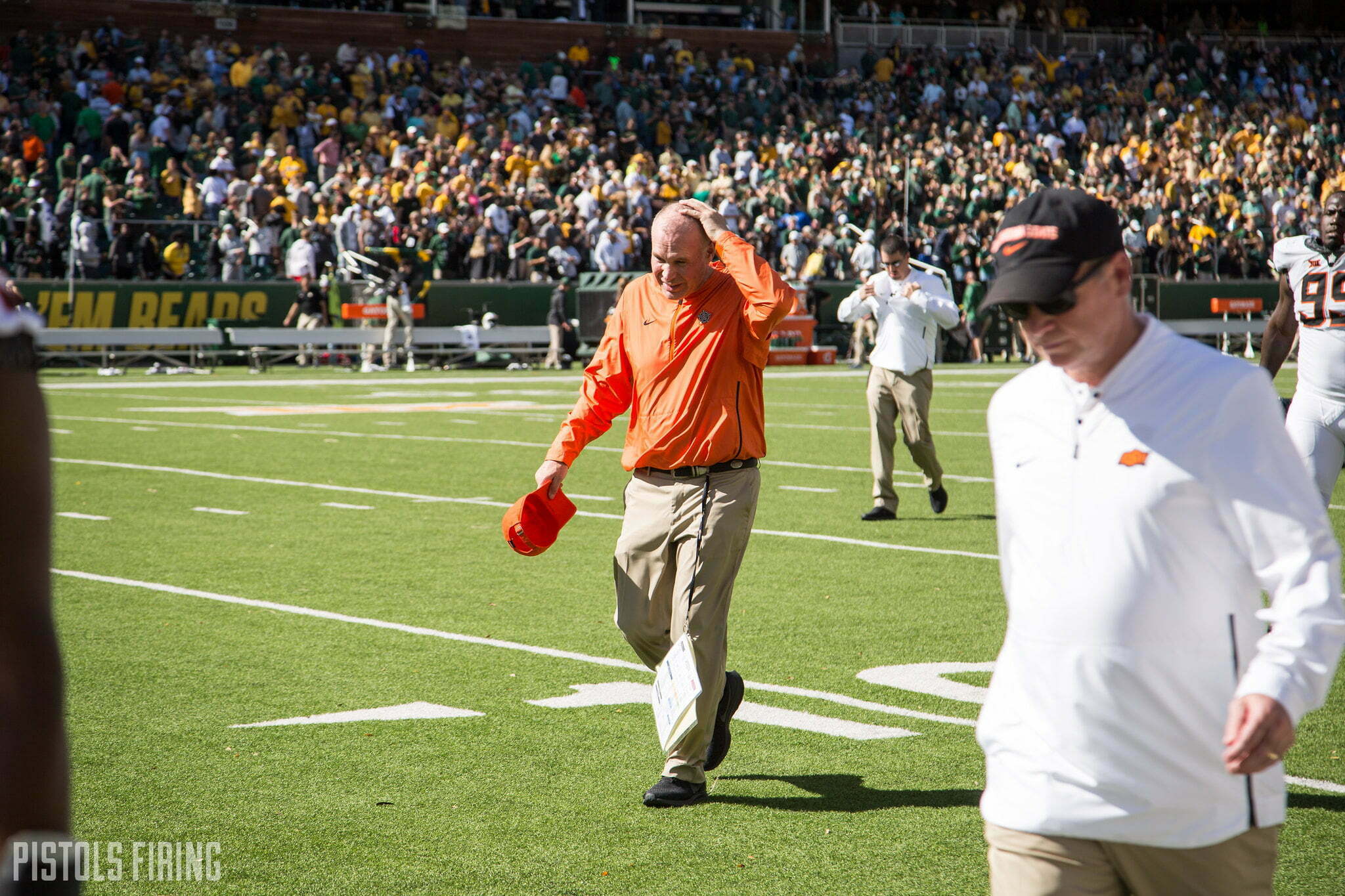 Big 12 Media Days on Monday. Marshall and Kyle B. are headed down tonight to PFB HQ (my house in Dallas) as we prep for the week. Can’t wait! (by the way, here’s my sermon from last Sunday if you’re interested in listening)

• Jim Knowles says coaching defense in the Big 12 is like parenting.

“It’s a lot like parenthood,” he said. “You really don’t know til you have a child. You can read about it. You can think about it. But until you actually do it… The offenses want to score on every play and not concerned with ball control and are willing to go for it and do different things that aren’t your standard football rules. They don’t really follow them in the Big 12.” [NewsOK]

I’m guessing gameplanning for Kyler Murray was the “my kid is screaming in the middle of the night and just filled his diaper to the brim” portion of those festivities.

• Marshall Scott is trying to incite a riot in the comments section of his series looking back at the 2012 Fiesta Bowl with this one.

Weeden finished with 399 yards, three passing touchdown and a rushing touchdown to Andrew Luck’s 347 yards and two touchdowns. I think I’m ready to say Weeden is the No. 2 quarterback in program history behind Mason Rudolph. By fractions. [PFB]

• This from Mike Boynton on Isaac Likekele and his growth from freshman to sophomore year was interesting and smart.

“I think what we’ll see, and I’ve seen this before, that he’ll come back to Stillwater with a different confidence about himself,” Boynton said of his returning starting point guard at the end of last season. “He would have been on a stage with the best players, his age, in the world. That says something playing with a lot of the best players in the U.S. but also against the best players on the globe is something that he will come back and feel that I belong in that conversation.” [GoPokes]

I think Likekele is going to make a leap this year. I think he’s going to contend to be an All-Big 12 player, and maybe all of this is just because I have this romantic, idealized view of what I want this basketball program to be. But I think he’s the kind of guy you can strap the other eight guys to, and he can drag them to 11 wins and a tourney bid.

• Greg Richmond on the importance of “Big 12 hours” for his defensive line.

• Alex Dieringer, good at the wrestlin’.

After being in professional baseball for 5 years @cowboybaseball still sends me their gear and it gets better every year. @joshhollidayosu @rwslidepiece @CoachLees_2 & @OsuVicRomero have and will continue to do huge things for that program! No better feeling than being a Poke! pic.twitter.com/BcETnDIdGQ

My air conditioner failed July 2. (But I get a whole new system on Monday) If you’re wondering how hot your house gets in July with no a/c, it’s like if all these were lit and you were [email protected] them #okstate #GoPokes pic.twitter.com/PDqVuIerPg

⭐️s get your name on a recruiting website, hard work earns you a scholarahip‼️ One of the best feelings as a coach is to tell one of your guys his hard work has paid off & he’s earned a FULL SCHOLARSHIP!! Congrats @LoganCarter87 keep up the great work! #GoPokes #okstate #OWNIT pic.twitter.com/g8xmAHdcAt

• This by Royce was predictably good.

• This by Tyler Parker was surprisingly (and unbelievably) good.

• Berry on all of this was interesting. I … don’t know that the Thunder are getting Justise Winslow for CP.

If Presti just gets more draft picks and expiring contracts for Paul and Gallinari, that’s a drag and you have my blessing to be disgusted. But if the Thunder can get another piece or two to get the rebuild started – Miami’s Justise Winslow – then the immediate roster has been fortified. [NewsOK]

How lucky we were, us four million Oklahomans who for 11 years got to watch Westbrook play basketball like a roaring river. Westbrook fought the French Revolution 80something nights a year, for more than a decade, becoming the most-known Oklahoman ever, the most-known BY Oklahomans ever. [NewsOK]