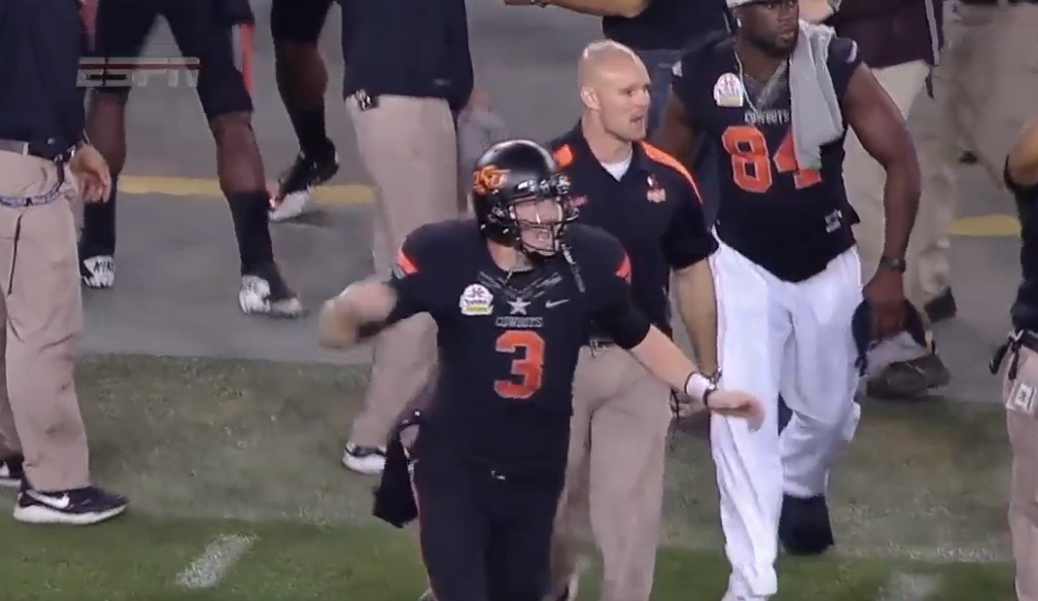 This has been a lot of fun, and I hope you all have enjoyed following along. We left off at the end of regulation with the tied at 38. Let’s finish this thing out.

• Andrew Luck calls tails at the coin toss. It lands on heads, and Quinn Sharp says OSU will start on defense.

• Stanford has only not scored when in the red zone twice this season heading into the overtime. One of those two happened at the end of regulation.

• With Luck quarterbacking the Cardinal, Stanford runs for 5 yards, commits a false start penalty, runs for -3 yards, then throws for 3 yards to end the drive right where it started, on the 25.

• Jordan Williamson trots back out, 1-for-3 on the day with his two misses left. It’s a 43-yard attempt.

• The snap slides to holder Daniel Zychlinski on the ground. Zychlinski places it, but the laces are facing Williamson’s incoming boot. If Brodrick Brown was any taller than 5-foot-8, he might have blocked the kick coming from Williamson’s left. Williamson got it off, though, but from the right hash, he pulled it all the way across the field. Wide left again.

• After a cool fist pump to celebrate the miss, Brandon Weeden puts his helmet on an takes the field.

• OSU’s first play is a jet sweep to Justin Blackmon, but Blackmon slips trying to cut and gets nothing.

• On the next play, Weeden fakes a handoff, and throws across the middle to a streaking Colton Chelf. Chelf gets wrapped up about the 3. He stretches the ball out as he’s crashing to the turf. The official raises his hands, proclaiming the Cowboys the winner.

• Chelf rips his helmet off as the team rushes to him in the end zone. David Shaw was half way to midfield to shake Mike Gundy’s hand when he turns around. The play is under review.

• The TV broadcast captures a cool moment where Colton’s younger brother, Clint, finds him in the mass of humanity in the end zone and the two embrace. 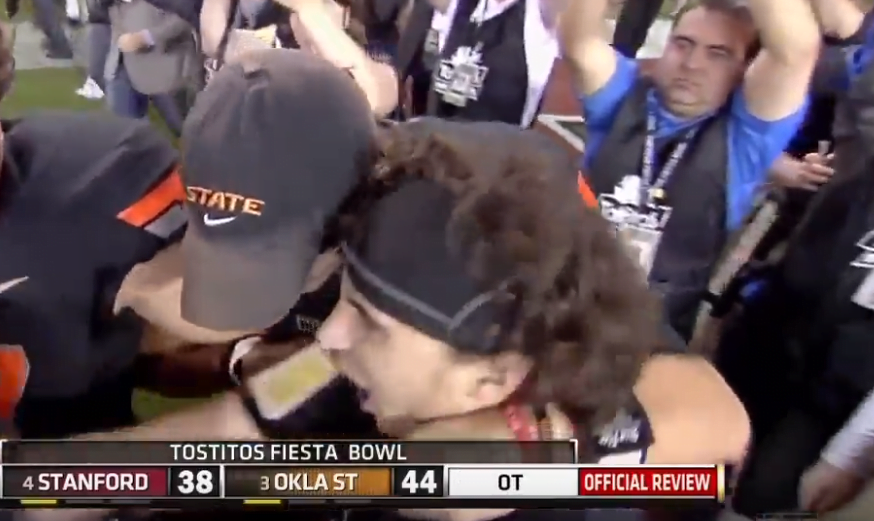 • It’s determined Chelf was down half a yard short.

• Weeden takes the first-and-goal snap and trots to the middle of the field before taking a knee at the 5.

• Out trots Sharp, who had missed only three field goals all season. David Shaw calls a timeout to try to ice Sharp, as Gundy successfully did to Williamson at the end of regulation.

• It would’ve worked on me. Rewatching it, already knowing the outcome, my palms are still sweaty.

• After the reset, Sharp drills the 22-yard field goal to finish the greatest season in program history. It was the first time OSU led all night, but it was the last play of the game. 41-38 Pokes.

• In Justin Blackmon’s on-field interview, he announces he’s going to enter the NFL Draft, forgoing his senior season. It isn’t too often nowadays that a guy would announce that in that setting, even if he knew his decision.

• At the trophy presentation Gundy gets asked if he wants to dance now or wait until he gets to the locker room. His response: “YouTube is killing me. I can’t go anywhere anymore.”

• Gundy hands the ball to Shelly Budke, and all these years later, I still have a lump in my throat.

• Blackmon finished the game with nine receptions for 186 yards and three touchdowns. After the rewatch, I think I’m ready to say he is the best receiver in program history. I’m not sure if that’s a hot take or not.

• Weeden finished with 399 yards, three passing touchdown and a rushing touchdown to Andrew Luck’s 347 yards and two touchdowns. I think I’m ready to say Weeden is the No. 2 quarterback in program history behind Mason Rudolph. By fractions.

• The Stanford defense didn’t allow a 100-yard receiving game all season heading into the Fiesta Bowl. Blackmon nearly doubled that up, and Colton Chelf, a former walk-on, finished with 97 yards.

• Alex Elkins had a game-high 12 total tackles, and all of them were solo stops.