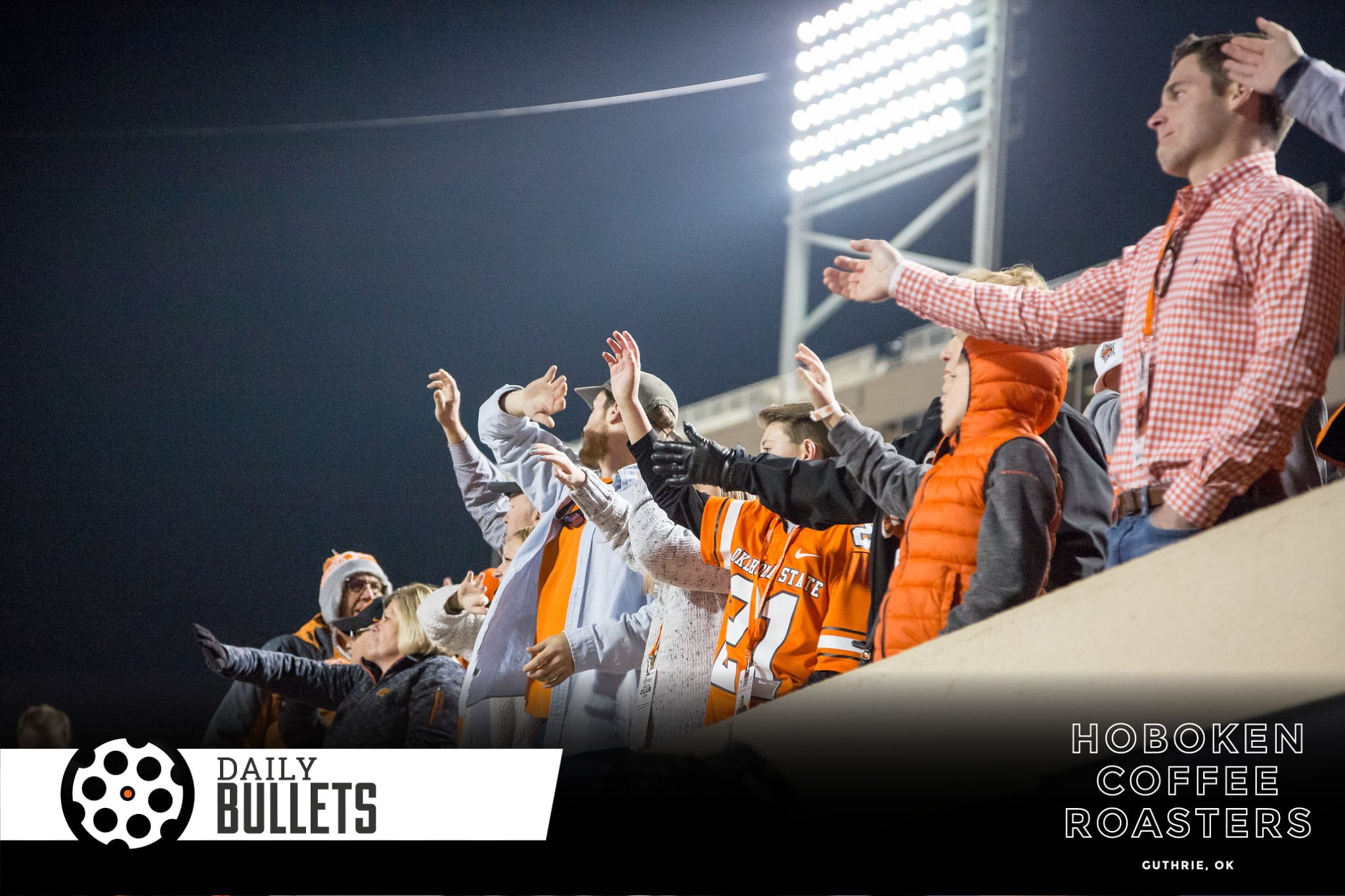 • It’s summertime in Big 12 country and the annual tradition is to talk realignment. That horse is dead and not worth kicking. But a recent article revisited the concept and how events transpired previously and it’s interesting to consider what might have been concerning OSU.

But Ubben’s article makes it seem like it got a lot closer than that (one reporter even insinuated that if Texas A&M had bailed for the SEC first, it probably would have happened). All of the what-ifs, including the following: What if OSU’s magical 2011 team had played in the Pac-16 instead of the Big 12? Colorado moved that year, and presumably OSU could have, too. [PFB]

Two things were interesting here: the idea of Texas A&M in the new Pac-12 and how OSU’s legendary 2011 team would have fared in this fictional league.

• The football season opener at Oregon State is being noted concerning a prevalent situation in college football: difficulty for the player’s “body clocks”.

Body-clock games: Kent State is at Arizona State for a 10 p.m. ET kickoff. Purdue at Nevada, Oklahoma State at Oregon State, Minnesota at Fresno State and Texas Tech at Arizona all kick off at 9:30 local time for the visitors. [Yahoo Sports]

If the Pokes were playing a competitive team (Washington State, Oregon, Stanford, etc.) the argument for the Cowboys bears a little more weight.

FYI – in case you’re unfamiliar with the term, “body clocks” was a term that made the rounds in 2015 when Stanford was given a pass for losing against Northwestern on account of their “body clocks” being askew after they traveled to play the game.

• An underrated storyline for the receiver depth chart revolves around the taller receivers per receivers coach Kasey Dunn.

“Rob (Glass) is the best in the country and, and so those guys are in great hands with the with everybody downstairs in the weight room and they’re making strides this summer. They’re all long Patrick McKaufman is 6-6, Jordan (McCray) is 6-5, C.J, (Moore) is probably 6-4 or 6-5. So all three of those guys are long and thin and now putting on a ton of weight and a lot of strength. And with that comes confidence at the end. So I’m excited. Like I said before, I’m excited to get those guys out there, start working with, you know, come August and then really see where we’re at.” [GoPokes]

Other than McKaufman recovering from injury, the question may be whichever guy can gain the most weight wins the playing time.

• Marcus Smart is perfect for Team USA Basketball. Not a “Dream Team” kind of a guy but to fill a role at an elite level is exactly who he is at the NBA-level: expert defender with enough offensive game.

• Not bad Nike. If you squint your eyes, they look like they’re snakeskin, right?

Rep the Pokes from head to toe.