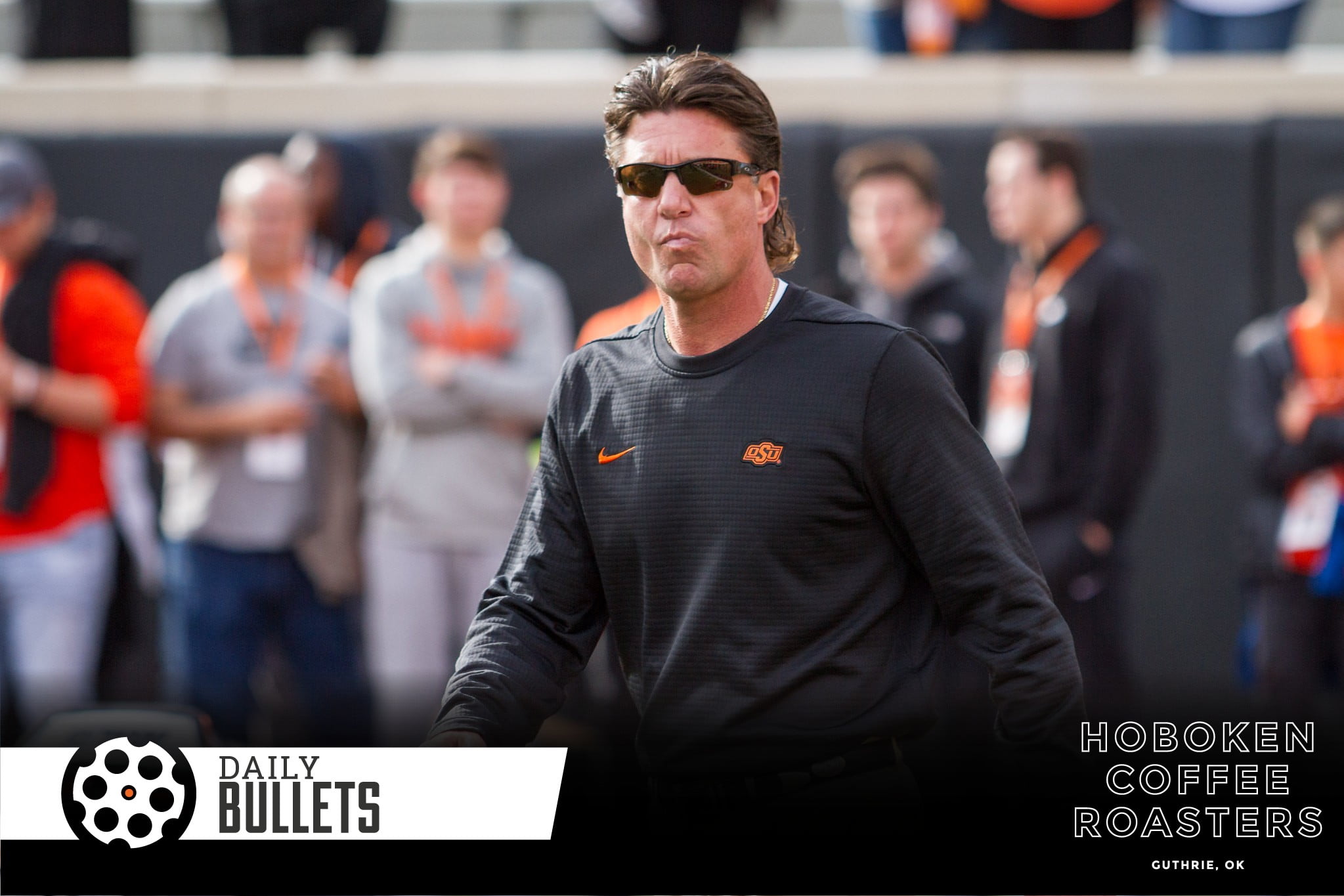 • This was a tough and fun look at Oklahoma State football for 2020 – this nugget on Tylan Wallace’s strength and the newfound hole on the offensive line is a good example of the upside and downside in play for OSU’s season.

It’s one thing to design a gameplan to bracket a receiver when he’s always in the same spot, it’s much more difficult to design a gameplan that can bracket a receiver wherever he lines up. If Wallace can move to the slot and run digs, flag routes, slot fades, and double moves that’s going to be a big problem. Even if you can adjust to that they can always motion him or line him up back outside. A receiver that can beat a 1-on-1 for six points at any position on the field is arguably the most valuable weapon in the game.

But all of this is limited if they can’t protect (Spencer) Sanders well enough to throw in the dropback game and have to rely on play-action. [Concerning Sports]

• Mike Gundy is being criticized because he’s not relational enough with current and previous players – I’m willing to hear out the complaints but it’s interesting that this is perceived as a vocational shortcoming or demerit.

(Former players) are concerned about their program’s brand. They put in too many years bleeding for and investing in OSU football to have everything undercut by bouts of negligence by the head coach.

“What we’ve got to understand is our brand is in jeopardy right now,” Gilliam says. “And no person, surely no one person, is bigger than the brand.”

Again, none of these alumni are screaming for Gundy’s job. They just want a seat at the table or their phones to ring. They want a more equitable return on their investment. [TulsaWorld]

Part of being a CEO (I assume) is about setting a culture in a place where people perform at their best and feel like a valued member of a team. Certain personalities (like mine) really enjoy talking with and maintaining relationships – some don’t.

Is Mike Gundy a bad football coach because he appears to be the latter? I don’t think so, but it does remove some of the margin and benefit of the doubt that he’d get in challenging situations like the one he’s created.

• Like that Cade is 6’8″ – love that our backup center has a 43-inch vert. “Verticality” around the basket is something I’m interested in for Pena.

• Phil Forte on life as a basketball coach

• Wow – may be tough to convince other schools that you have more insight than Harvard.

While some students will live on campus, "all course instruction (undergraduate and graduate) for the 2020-21 academic year will be delivered online"https://t.co/TRB8Gaap0t

Why it’s impossible to drive entirely across the Americas: