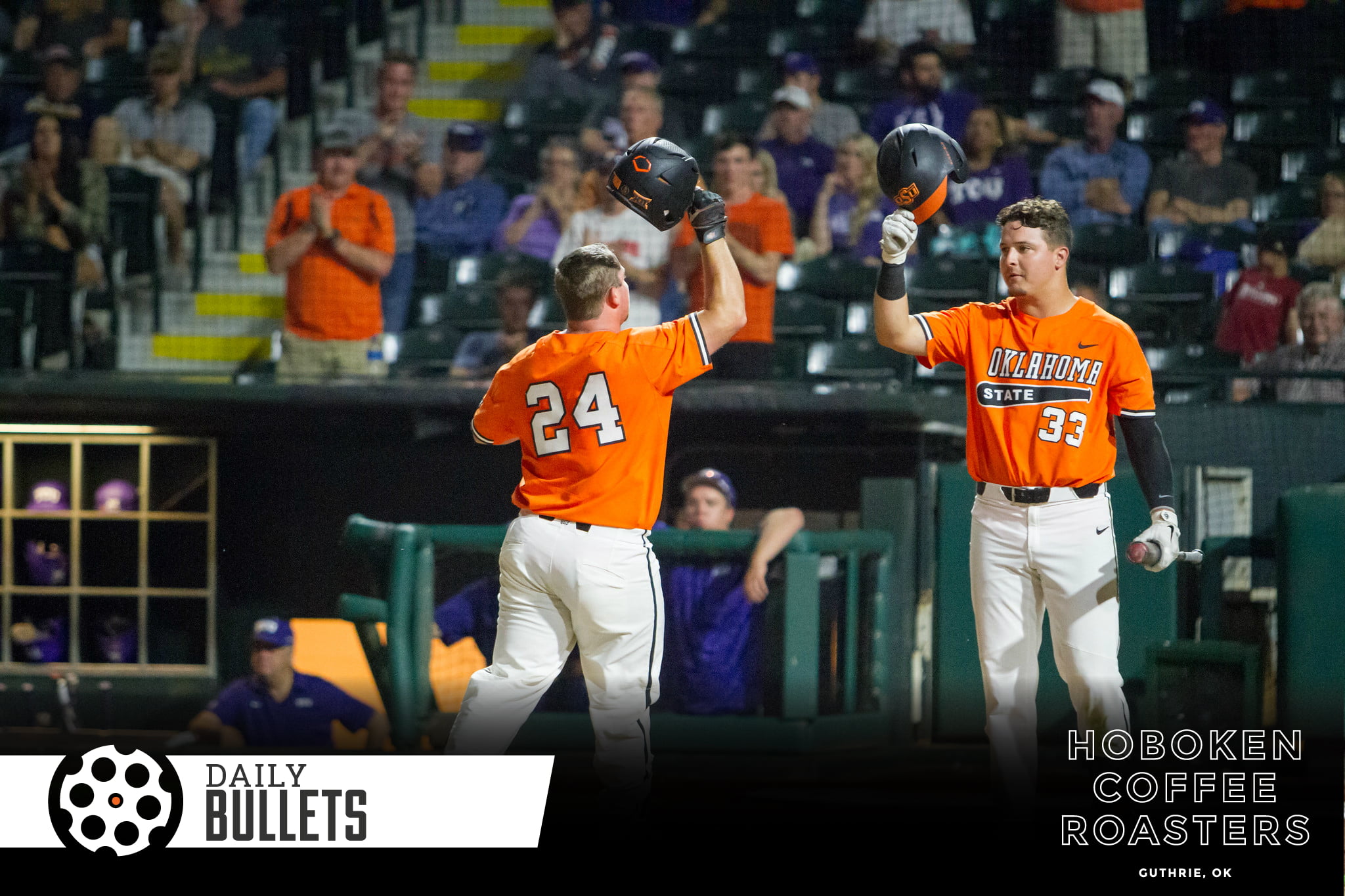 Watched the Stanley Cup Finals on Sunday night – is hockey the world’s way of avoiding playing the U.S. at tackle football or vice versa? Can you imagine if Bill Belichick and the NFL’s best threw all they had at hockey?

• Porter nailed it when he lined out a reality that I really didn’t want to face.

Winner: Baker Mayfield — I’ll say it. If you’re going to ride for admittedly outrageous bat flips that we saw, then you have to be prepared to ride for flag plants in the middle of stadiums that hold 110,000 human beings. I don’t make the rules people, I just abide by them.

Loser: Baker Mayfield — Had to re-balance the universe there.

This felt like the perfect line to me – convicting me of my hypocrisy while still not letting a compliment sit on Mayfield’s record. I loved watching Boone gallivant about the bases and watching Show tomahawk the bat – therefore I need to stop calling Sooner fans jerks for liking Baker Mayfield (concerning this one point).

• Tramel points out a fun and key fact about OSU Baseball – the tradition extends beyond the Gary Ward glory years.

We sometimes think of OSU baseball as being the Gary Ward glory years, and everything else as trying to live up to Ward’s remarkable 19-year tenure, which included 16 straight conference championships 10 College World Series appearances, including three NCAA second-place finishes.

But the truth about OSU baseball is that the Cowboys have a superb tradition that was in place before Ward and has been sustained after Ward.

Here’s a stat. Every OSU baseball coach since 1941, except one, has taken the Cowboys to Omaha for the College World Series. [NewsOK]

• Cowgirl-turned-World Cup goalkeeper Adrianna Franch used her midwestern (and southwestern Stillwater roots) as a chip on her shoulder.

In 2019, everything culminated when she landed a spot on Team USA.

“She’s sort of the outlier,” (Cowboy coach Colin) Carmichael said. “She’s in there with kids from UCLA and Santa Clara and Duke and Carolina and Notre Dame. And here she is a kid from Oklahoma State. I think that was something that she always felt like she had to prove herself.

It’s always fascinating in pro sports to think about where folks came from – Jerry Rice and Mississippi Valley State comes to mind. Some folks face the adversity of no personal branding and rise above it – kudos to Franch.

• This is a fascinating instance – would the NCAA let a guy come back after getting hurt in the pre-draft process? I kind of doubt it.

Michigan's Charles Matthews suffered a torn ACL at a workout with the Boston Celtics, his agent Adam Pensack told ESPN. Matthews was garnering interest as one of the top defenders in the 2019 NBA draft class. ESPN news story with more details: https://t.co/WKsQozofhl

• Here’s an idea on how to get outta the house when relatives come over for the holidays:

$15 gets you both games of the doubleheader …

We'll post ticket instructions as we get closer to Friday.

• The novelty that paper planners are sort of blows my mind

• The Raptors mimicked the Thunder (except they got to the Finals)