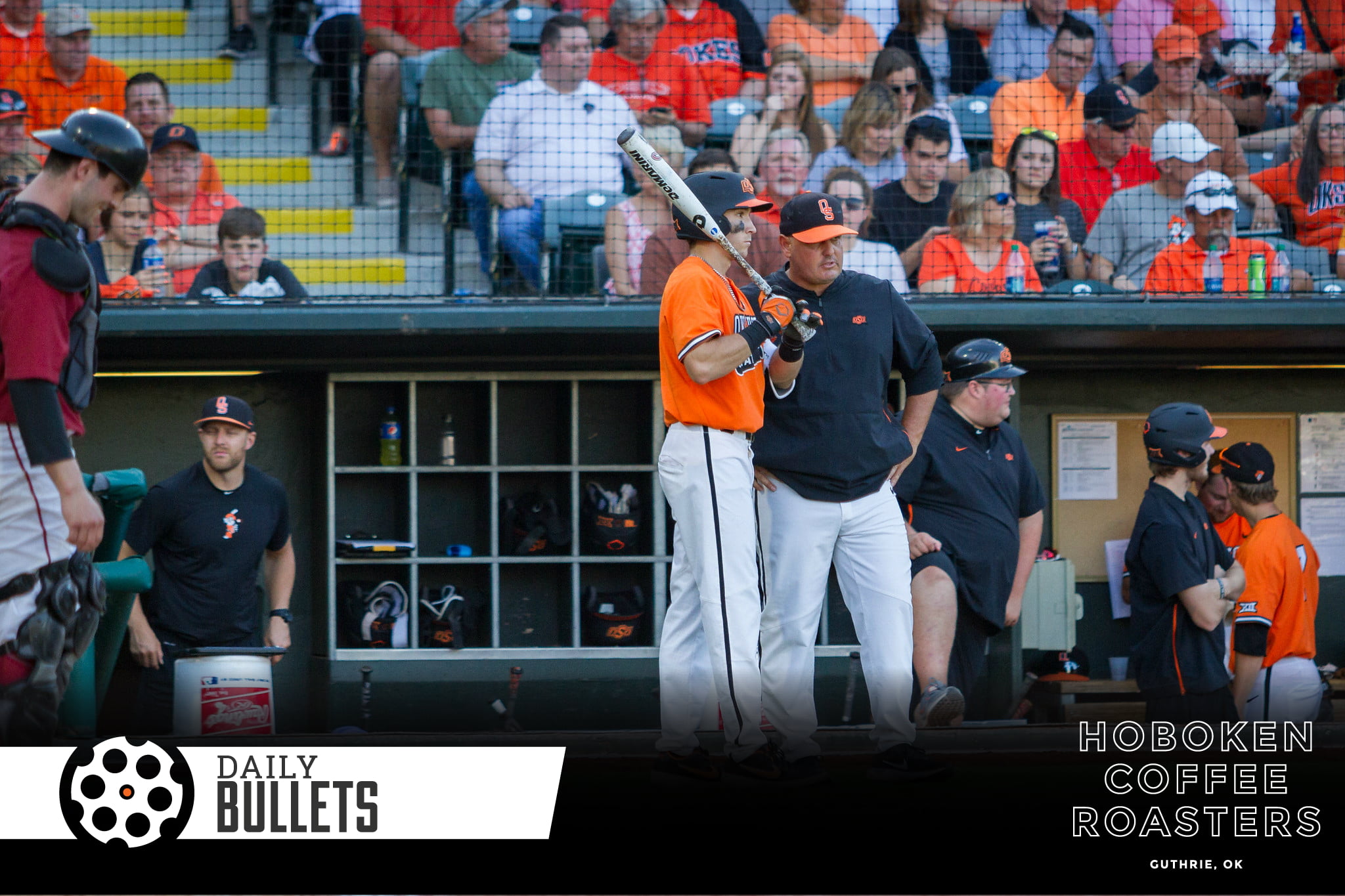 Today marks the 75th anniversary of D-Day in France – can’t imagine where we’d be as a country/planet without the sacrifice those men made.

• As the MLB Draft concluded yesterday, Josh Holliday has a thoughtful demonstration he takes committed Cowboys through when considering their options.

Holliday’s presentation started with the bills, which symbolize a minor league player’s signing bonus. He matter-of-factly placed the suitcase on the table and unzipped it, showcasing the bundles of Benjamins.

When he talks to recruits and their families, he casually sets stacks of bills aside, often discarding them in a trash can for emphasis. Soon, a huge chunk of a $1 million signing bonus has disappeared.

“Your first thing you have to do when trying to communicate with a young person about this is dispel the myth that this $1 million suitcase would last you forever because it won’t,” Holliday said. [O’Colly]

I’d recommend the rest of the article – incredibly insightful concerning the conversations that take place between the coach and player.

• The TulsaWorld‘s Bill Haisten is feeling doubtful about Leslie O’Neal’s chances to get into the CFB Hall of Fame this year but this comment by former Cowboy coach Pat Jones tells you O’Neal’s place in the Cowboy pantheon.

Jones on O’Neal: “Depending on where you put Bob Fenimore, O’Neal is either the third- or fourth-best player ever at Oklahoma State. The first two are (Barry) Sanders and (Thurman) Thomas.” [TulsaWorld]

I’m a little too young for judgments of the O’Neal era but I’m not positive there’s a more heralded defender in Cowboy history.

• Boone highlights some intel on the Cowboys’ chances for one of the top recruits in the 2020 class.

As Evans noted and most people have believed, (Cade Cunningham)’s (a) long away from making a college commitment. He has a year to make a decision. But OSU is in pole position for one of the best — if not the best — players in the 2020 class for now.  [PFB]

Between the recently-crowned five-star Bryce Thompson, long-time target Isaiah Todd, and Cunningham, there are some serious names in play with OSU in the running. It was a blast watching Boynton reel him a boat-load of four stars this year… Can you imagine a world where multiple five-stars wind up in Stillwater?

• D1 College Basketball is moving back the three-point line this year – plus a couple of other changes. CRFF looked at how this change will impact the Pokes.

• I was surprised by the data usage of iPhones at night

Y'all , watch this baby have a full damn convo with his daddy ??? pic.twitter.com/gEbtJZ6xuP