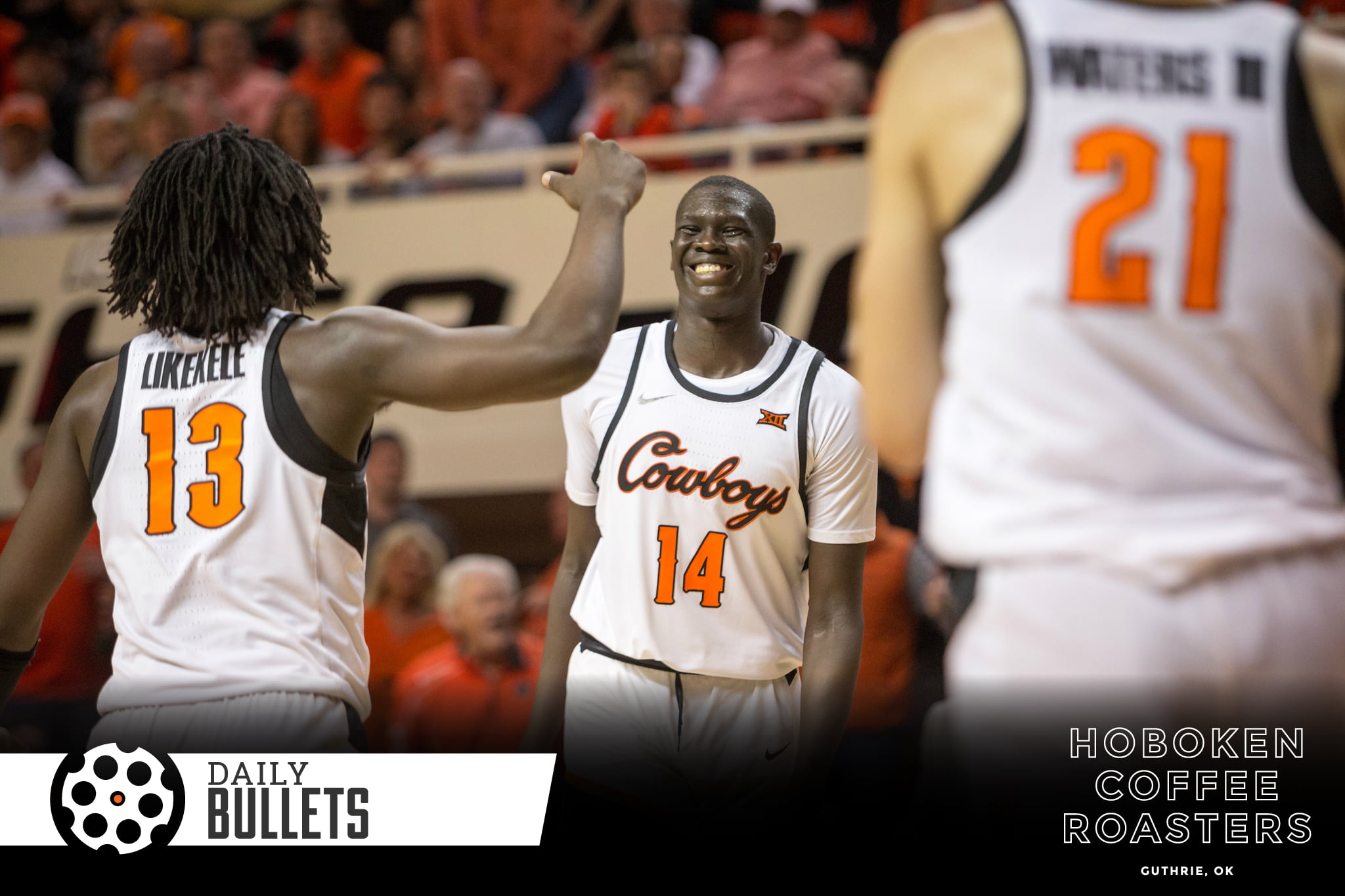 Should it be a national holiday celebrated at all places of work where all employees get a half hour to fill out brackets? It could be pitched to management and shareholders as a teambuilding idea.

Anei is a building block any program in America would envy. A raw but productive, instinctive freshman. Put Anei with the shooting of Waters and Thomas Dziagwa, the toughness of Cam McGriff, find a point guard (maybe it’s incumbent Isaac Likekele), and Boynton could be ready to launch this slumbering program.

“It’s a good start when you have a 7-foot kid (Anei) who can change the game without scoring a basket,” Boynton said. “I’m excited about what he can become…” [NewsOK]

NBA teams can scheme away the impact of a player – specifically by pulling a rim protector out to the perimeter with stretch bigs. Anei’s effect won’t be mitigated in the Big 12 and his impact holding teams down (five fewer points a game? ten fewer points a game?) will be felt.

• It’s interesting to see what NFL teams (mostly fans) are saying as they evaluate Justice Hill.

Justice Hill has three years of production and consistency as the primary running back at Oklahoma State, but probably projects better as a change of pace back in the NFL. He is an electric playmaker anytime he has the ball in his hands and was surprisingly durable throughout his college career for a RB his size. [Inside the Star]

As an OSU fan who thought there was no way the diminutive back would make a difference when he signed, it feels appropriate to warn any NFL team not to make the same mistake as he throws up eye-popping measurables to go with his productive tape.

• These were the two facts that most caught me off guard since OSU won an NCAA tournament game.

Last time OSU won an NCAA Tournament game, Nick Saban had eight losses at Alabama. He now has 21. He has five more titles than OSU has NCAA Tournament wins since 2009. [PFB]

Tylan was nine! Blackmon was still working for a bigger role in Stillwater and Saban hadn’t turned Tuscaloosa into titletown.

• For some solid March Madness research – here’s a breakdown of the teams and their overall ranking.

• TCU and Texas headed to the NIT.

• The next time your OU coworker gives you fluff, let em’ know they’re not Yale.

Yale Football and Basketball have combined for 33 National Championships, more than any other D1 program. Yale Basketball just qualified for the NCAA Tournament and is looking for #34. pic.twitter.com/uJZgzVZTFh

• Love the idea of the bracket played out by football programs – despise the winning team.

If this was football, congrats Oklahoma pic.twitter.com/H0K9RUOQ1Y

•  The idea of different levels of reading makes a lot of sense – learning to be analytical about fiction seems to be a great step.
• I could go for a dozen articles on how to be a better listener every day – or maybe just this one on repeat.
• The “enfreshening” impact of exercise

When you put it this way… I’m up for keeping Fahrenheit.