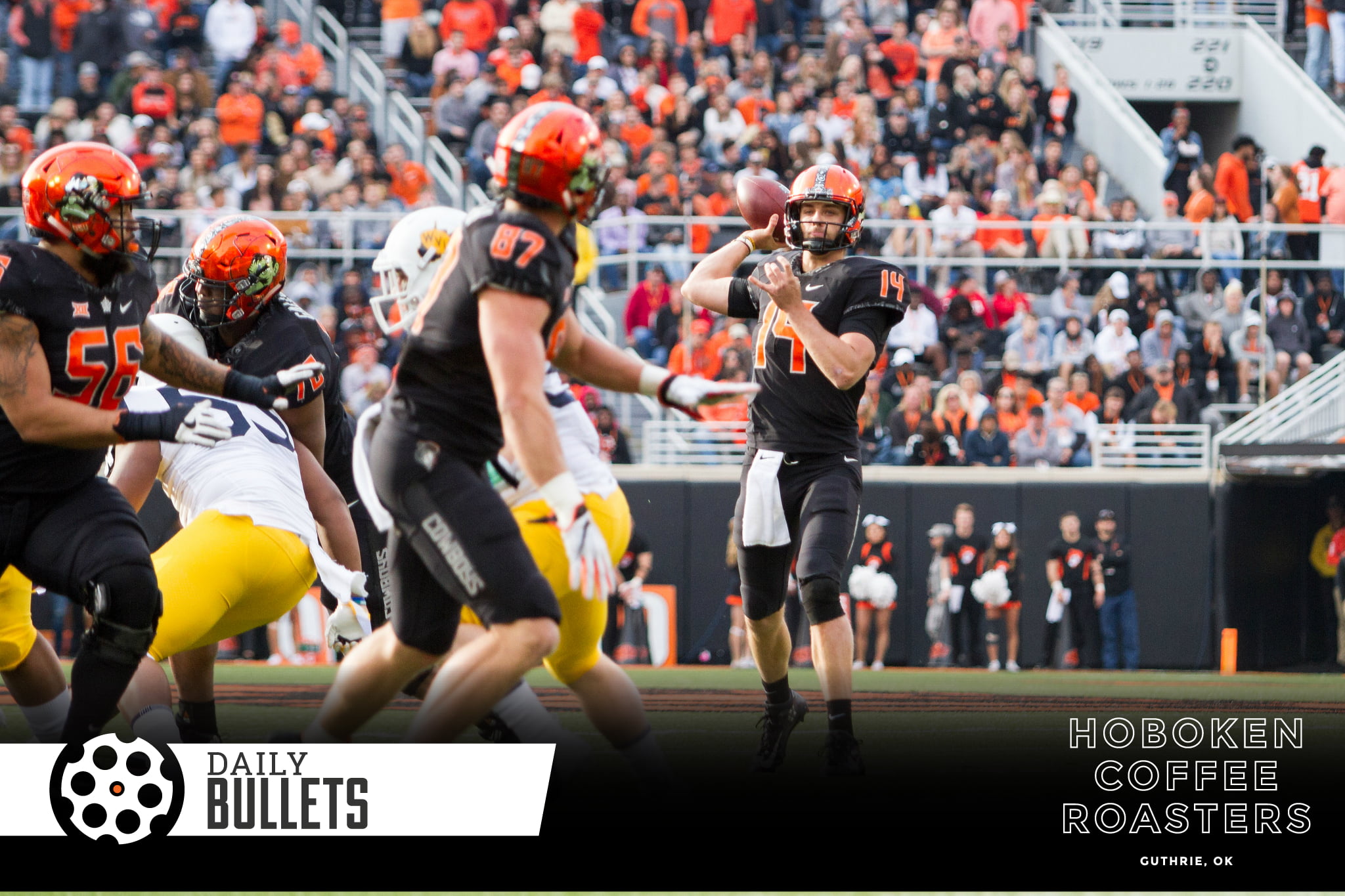 Spring is coming and winter nights watching Lindy sink threes and Anei swats will go away with the warmer weather. Sic’ the Bears.

• A reader had a fantastic take that I hope to be prophetic in this week’s reader question column looking at the similarities between Baylor’s Nick Florence and OSU’s Taylor Cornelius. At a higher level, looking the comps for OSU and Baylor primarily around the QB similarities.

The part that intrigues me — and I think has been sort of the subtext for the last year — is that schools like OSU and Baylor seem to disproportionately rise and fall on the back of elite QBs. Pro QBs. NFL guys who go in the top four rounds (as Rudolph, Griffin and Petty (and Weeden!) all did). [PFB]

A good quarterback covers a multitude of depth (and talent) issues and I’d venture to say is the primary ingredient for a classic college football upset.

• The Cowboy safeties group is deep and loaded – I’m all in on safety Kolby Peel.

The group has a variety of skills. (Malcolm) Rodriguez has become known for his sure tackling. (Jarrick) Bernard and (Tanner) McCalister have cornerback-quality coverage skills. And Peel mixes both, which he showed on the defense’s final drive of the season — the game-clinching series against Missouri in the Liberty Bowl.

Peel broke up a pass inside the 5-yard line as Missouri tried to score the game-winning touchdown. Then on fourth down, Peel chased down Missouri quarterback Drew Lock, stopping him short to seal OSU’s victory.  [NewsOK]

The guy just makes plays – loved how he gave the Pokes a chance late against TCU making a key stop and this play in the bowl saved the game.

Get with a speed coach before the combine Lock @kolbypeel BIG TIME PLAY FAM!!! pic.twitter.com/wWeQtcvIox

• When the Pokes take the court tonight in Waco, it certainly matters but it’s more impactful to win Saturday where there’s Big 12 tourney seeding on the line.

The Cowboys will go into the bracket as the league’s ninth or 10th seed, with Saturday’s home finale against West Virginia likely determining who finishes last in the conference, meaning they will have to win four straight games to extend their season. OSU hasn’t won even two games consecutively since Jan. 8 and 12. [NewsOK]

• What are the two biggest factors for a repeat standout performance for Tylan Wallace?

Can he replicate his ’18 success? A lot of that depends on how well new offensive coordinator Sean Gleeson (who came over from Princeton) meshes with Cornelius’ replacement, which should probably be either rising redshirt freshman Spencer Sanders or Hawaii transfer and redshirt senior Dru Brown.

As long as those two pieces of the puzzle come together, Wallace is guaranteed to hold up his side of the bargain if healthy. [Bleacher Report]

• I’m out on this argument against the “First Four” – just enjoy your Big Dance appetizer and move on. Sure, the committee is biased towards brands and they have more opportunity but let’s not throw the baby out with the bathwater.

• I like this Danish word on not overreacting to stressful situations (not my strong suit):

At its core, it’s about accepting and resetting. It’s used as a reminder to step back and refocus rather than overreact. Instead of assigning blame, it’s a way to let go and move on. [Popular Science]

•  These heavy words explain the political infighting of our day – “motive attribution asymmetry” being that your view is founded in love and your opponents is founded in hate.

People often say that our problem in America today is incivility or intolerance. This is incorrect. Motive attribution asymmetry leads to something far worse: contempt, which is a noxious brew of anger and disgust. And not just contempt for other people’s ideas, but also for other people. In the words of the philosopher Arthur Schopenhauer, contempt is “the unsullied conviction of the worthlessness of another.” [NYT]