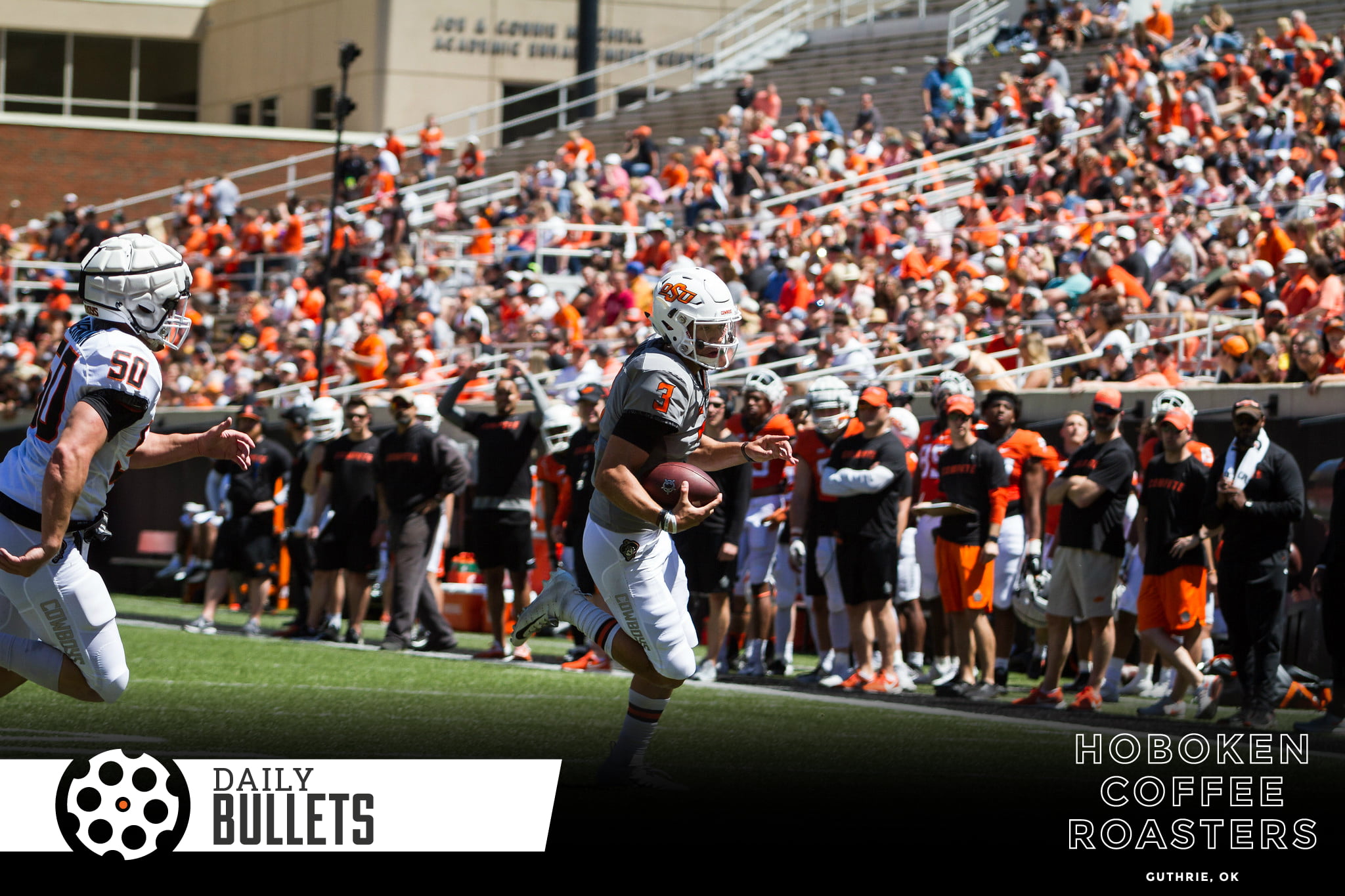 Fun news yesterday that the Cowgirls will be hosting a softball regional for the first time since 1998 – impressive stuff, ladies.

• Berry Tramel did a Mother’s Day piece on Vina Weiberg, the mother of OSU associate AD Chad Weiberg and Jared Weiberg, a victim in the January 27th plane crash (Remember the Ten).

It was fantastic – especially this piece on how Mrs. Wieberg operated after the crash.

“What amazes me is the way she dealt with it with as much grace, given as awful as it was,” said the oldest son (Chad) . “She was determined that it not ruin the rest of our lives. She and dad worked hard that (we) knew they here for us and they loved us. Yeah, it was awful … but she never wanted to make it seem to us that we weren’t enough. I don’t know how they did it. But I’m amazed they could find that strength to do that.”

The best of those sons has been gone 18 years, but Vina always has included him in the conversations at family gatherings, and her grandkids have come to know the uncle they never met. [NewsOK]

• After the Pokes went up 10-6 on OU in Norman yesterday, they were able to hold off a Sooner rally to clinch the series.

It got a little sticky in the bottom of the ninth when Brady Basso hit Diego Muniz before issuing walks to Tanner Tredaway and Brady Lindsly to start the inning. Ben Leeper then came to the mound for the Cowboys. Leeper gave up a sac fly to make it 10-7. Leeper then forced Justin Mitchell to pop up to second, but he walked Brylie Ware to reload the bases.

The game ended when Brandon Zaragoza popped out to second, as Leeper was able to get out of a bases-loaded, no-out jam having only given up a run. [PFB]

• Sports Illustrated won an appeal last week made by an Oklahoma State booster.

When talking to SI editor B.J. Schecter in Stillwater in September 2013, (John) Talley confirmed he hired and paid players to work on his property and for speaking engagements but insisted he cleared the arrangements with compliance, according to court documents.

Schecter and (SI employee) Dorhmann met with athletic director Mike Holder, head of compliance Kevin Fite and general counsel Gary Clark that same month, and Fite was recorded saying Talley’s claim that he was given clearance to pay players for speaking engagements was false. [TulsaWorld]

Every penny that Sports Illustrated would pay out after an independent third-party ruled their findings to be “fundamentally unfounded” would seem to appropriate. It’s disappointing but sounded like a fair ruling.

• When Mike Gundy told Larry Joubert he was moving to Cowboy Back, it was just another change in a winding football career.

The fullback/tight end hybrid position had just lost a couple of talented blockers in Britton Abbott and Sione Finefeuiaki, and needed someone to fill the void.

The change came with new instructions. Catch 50 balls a day. And run more. For the first time in his career, he wouldn’t have to be trying to add weight, but could let a few pounds slide off.

When he came out of Douglass in 2015, Joubert was viewed as a Division I-caliber offensive lineman, but a little undersized because of his lean build. [NewsOK]

• NCAA is looking at pushing back the three-point line – doesn’t seem like the best move with college basketball slugfests. Heck, add a four-point line somewhere back there.

• Balancing the incoming with the next thing

• I enjoyed these two NBA pieces by The Ringer: on the Lakers’ hire and what Harden needs in Houston

This Kawhi game-winner yesterday was incredible.