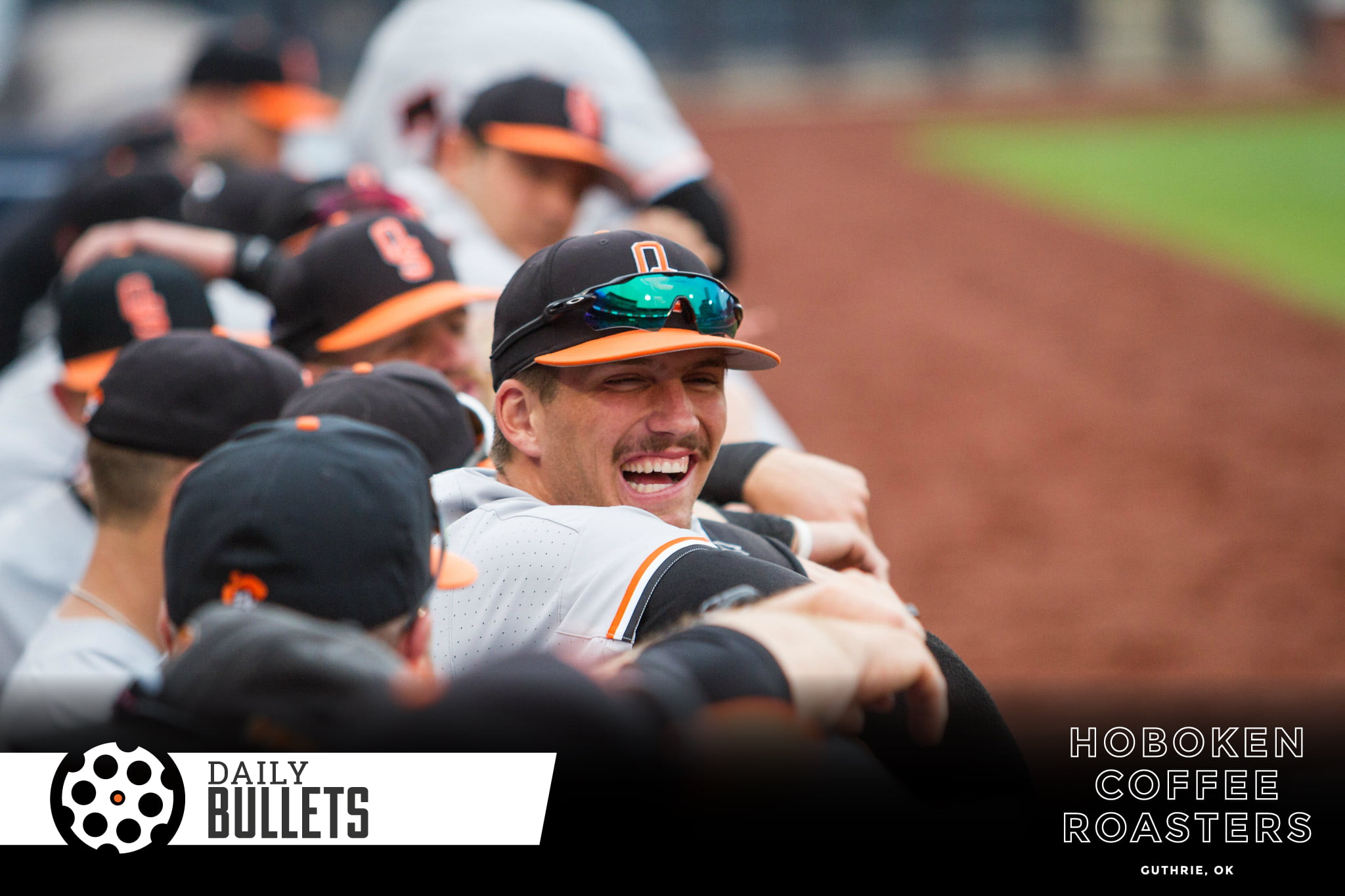 Pretty philosophical but enjoyed this quote/article:

You never have to deal with more than one moment at a time.

• How Josh Holliday harnesses the success his team has had this year will determine a lot about their endpoint.

“I think what you’re trying to show your team is your best baseball when put up against someone else’s best baseball is really good,” Holliday said. “Now, how do we duplicate that performance and focus on those things? If we can continue to do that, which I think the players understand now, you’ve got a chance to do something special with your season, right?”

Right. A coach uses a series like the one OSU played at Oregon State not to glorify the accomplishment, but to magnify what it can lead to. [TulsaWorld]

It’s apples-to-bananas but Oregon State could practically be compared to a North Carolina or Michigan in basketball: programs capable of winning it all in recent history.

For the Pokes to come in and sweep is a supreme confidence boost – you don’t have to be scared of anybody at that point.

• ESPN ranked OSU in the top 20 of future offenses in college football.

Scouting the Cowboys: It’s odd that quarterback jumps out as the big question mark, given coach Mike Gundy’s track record of developing talent. But Oklahoma State needs an answer at QB, whether it’s Hawaii transfer Dru Brown or Spencer Sanders, ESPN’s No. 8 dual-threat signal-caller in the 2018 class. [ESPN]

By ESPN’s “future QB rankings” – guess how many other teams were ranked in the top 20 without having a “ranked” future QB? One other team: LSU (because it doesn’t matter who’s throwing the ball).

I can’t say it enough – the highly successful track record (since Zac Robinson took over) of Mike Gundy with quarterbacks and beating teams with similar talent is something I love about his teams.

• Concerning four-star QB Shane Illingworth – haven’t we seen this movie before? Where a coordinator from a faraway land plucks a four-star quarterback from a coast early in his tenure?

Now let’s be clear: Illingworth (probably) has a more difficult path to success than the parallel here that is Mason Rudolph. Rudolph took over a program that needed a QB to step up (reminder: Daxx Garman was actually a thing), and he solidified the position. Illingworth inherits a situation where Spencer Sanders will (presumably) be coming off a Heisman campaign, and with Brendan Costello a year older and wiser. [PFB]

It’s obviously impossible to project how Spencer Sanders and Brendan Costello will look over the next couple of years.

The thing about Rudolph was that J.W. Walsh kept getting hurt and OSU desperately needed a guy to develop and take the reins. With apologies to John Kolar and Keondre Wudtee, Rudolph was the only one with the talent on the roster the years Rudolph was king.

Illingworth (Lord willing) won’t likely be needed until later in his career – but as far as recruiting goes, it seems like the future is in good hands.

• I left this tidbit out earlier in the week – the Bishop McGuiness linebacker committed to the Pokes took a visit to Norman over last weekend.

“Right now, I’m committed to Oklahoma State and staying that way for the time being,” Walker started off. “Norman was good, the culture there was crazy. It is like something that I’ve never experienced before. I mean, of course, the facilities are amazing and that entire program is top tier. It was what was expected out of a place like OU.” [GoPokes]

Not here to scare you about Brynden Walker’s recruitment but the above excerpt didn’t thrill me as a fan hoping to hold onto the talented defender. He’s still planning on taking a visit to OSU soon, there’s still time.