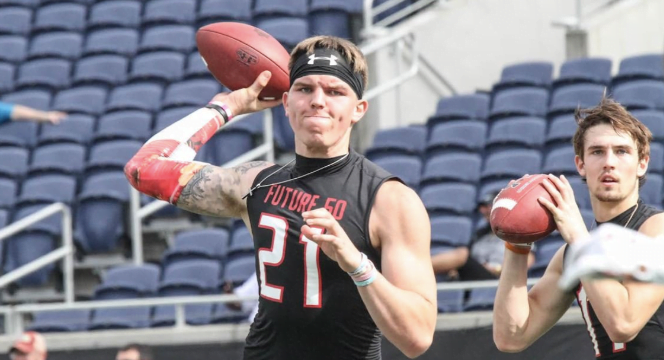 When Mike Yurcich, an up-and-coming coordinator who leapt from Shippensburg to Oklahoma State, first tried making a splash in the orange-and-black, he did so by solidifying the most important position on the football field. He recruited (and landed) the services of Mason Rudolph, a South Carolina standout who decided to leave the region to play in an uptempo offense.

Rudolph was awesome (duh). He was also a game-changer — for OSU, for the #brand, for Yurcich. Yurcich rode his QB to great heights, and while OSU did not win a conference title, Rudolph quarterbacked 10-win seasons like it was a walk down The Strip.

Gleeson’s path could be similar to Yurcich’s in more ways than one. Gleeson was hired from Princeton — not exactly a football factory for Division I coaches, similar to Shippensburg in that regard — and Gleeson already has a path to follow. In his early days as the OC, by landing four-star QB Shane Illingworth on Wednesday, he can replicate Yurcich’s path to success.

Now let’s be clear: Illingworth (probably) has a more difficult path to success than the parallel here that is Mason Rudolph. Rudolph took over a program that needed a QB to step up (reminder: Daxx Garman was actually a thing), and he solidified the position. Illingworth inherits a situation where Spencer Sanders will (presumably) be coming off a Heisman campaign, and with Brendan Costello a year older and wiser.

But if Illingworth is worth his salt as a passer and as a prospect, as many believe he will be, it’s possible Yurcich’s successor at OC could blaze the same path the Rudy-Yurcich tandem once paved to success as offensive giants in Stillwater for years to come.