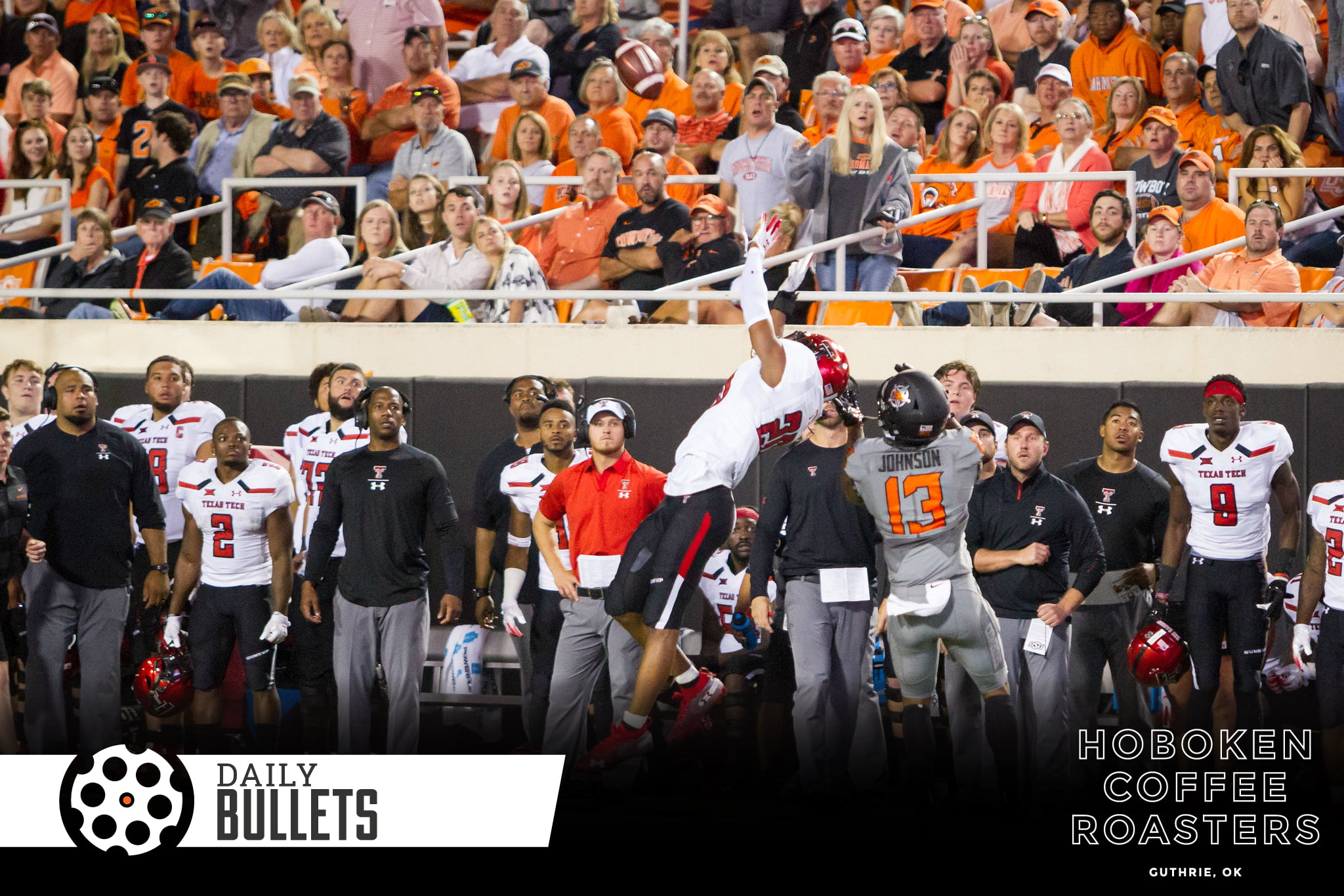 Finished a two-month jaunt through this American classic yesterday – as good as advertised. These are the kinds of things I like to do to survive without OSU Football and Basketball.

• Where would you rank Mike Gundy nationally as a coach? CBS has him in the top 15 (h/t to NewsOK’s Scott Wright for finding this).

12. OKLAHOMA ST. Mike Gundy
When will my colleagues admire Gundy as much as I do? I had him at No. 5 on my ballot, and admittedly, that is probably a little bullish, particularly after a 7-6 season. Still, Gundy has gone 121-59 in 14 seasons with the Cowboys and 85-32 over the last nine years. The only thing missing is the conference titles, which I assume is a major reason my colleagues aren’t as high on him as I am. Still, if I were running a program, there aren’t many coaches in the country right now I’d hire over Gundy.  [CBS Sports]

• What would you say has been Cowboy Football’s worst loss over the last few seasons?

I have two options here both from the 2018 season. The Texas Tech game or the Kansas State game. I’ll say the 41-17 loss to Texas Tech at home was worse than the 31-12 loss at Kansas State just because the Cowboys got embarrassed at home rather than on the road. [HCS]

I think the drift here is the most appalling loss – not most the gut-wrenching, which would be a different argument. If Central Michigan isn’t an option, then Texas Tech might be it. While they lost their starting quarterback, the egg that was laid after a convincing Boise State win was easily the most shocking.

“There’s a reason why he’s very instrumental for our team being successful,” Irving said. “Because he’s a veteran now — not in terms of years, but he’s played high-level basketball for the Celtics for a few years now. So we expect him to be in the right spots and doing the right things.”

The message behind the words Irving spoke inside the Smoothie King Center locker room was loud and clear to all who heard it: If it was up to him, Smart would remain in the starting lineup.

Irving got his wish. It was the right move, too — Boston rattled off eight straight wins with Smart starting, and he was arguably the best defensive guard in the league this season. [ESPN]

It’s hard to fathom but Marcus Smart is a Tony Allen-level All-NBA defender – arguably the “best defensive guard in the league this season.”

• I’ve been chewing on Boone’s thoughts about who should be the starters next winter for Boynton’s Pokes – it’s a tough one to project.

Of the starting five from last season, I feel *fairly* comfortable saying it’s safe that three will retain their starting gigs, barring a major change that could come with the final unused scholarship spot: Isaac Likekele, Cameron McGriff and Yor Anei.

That leaves shooting guard and small forward open with Dziagwa and Waters vying for the right to retain their spot. As I project things now, I think both will move to the second unit, but I must make the obvious caveat here that it is still softball season so cut me a little slack. [PFB]

I would swap out Likekele for Waters and bank on McGriff, Waters, and Anei starting. Dizzy is a solid sixth man, perfect to inject life into an offense. Likekele’s perimeter defense will keep him on the floor but he’s not efficient with high volume usage.

Avery Anderson may have a shot at getting into the starting backcourt but I feel like 3-5 is solidly established.

"Oklahoma State is a family tradition."

• Lowest academic scores around football programs was a bit surprising – FSU dragging up the rear isn’t crazy but TU being in the bottom five is pretty wild. OSU killed it – Cowboy Football finished T15.

Lowest-ranked FBS schools in newly released APR data (2017-18). All fall above the 930 benchmark to avoid penalties.

• Good short read from Godin on how things get better