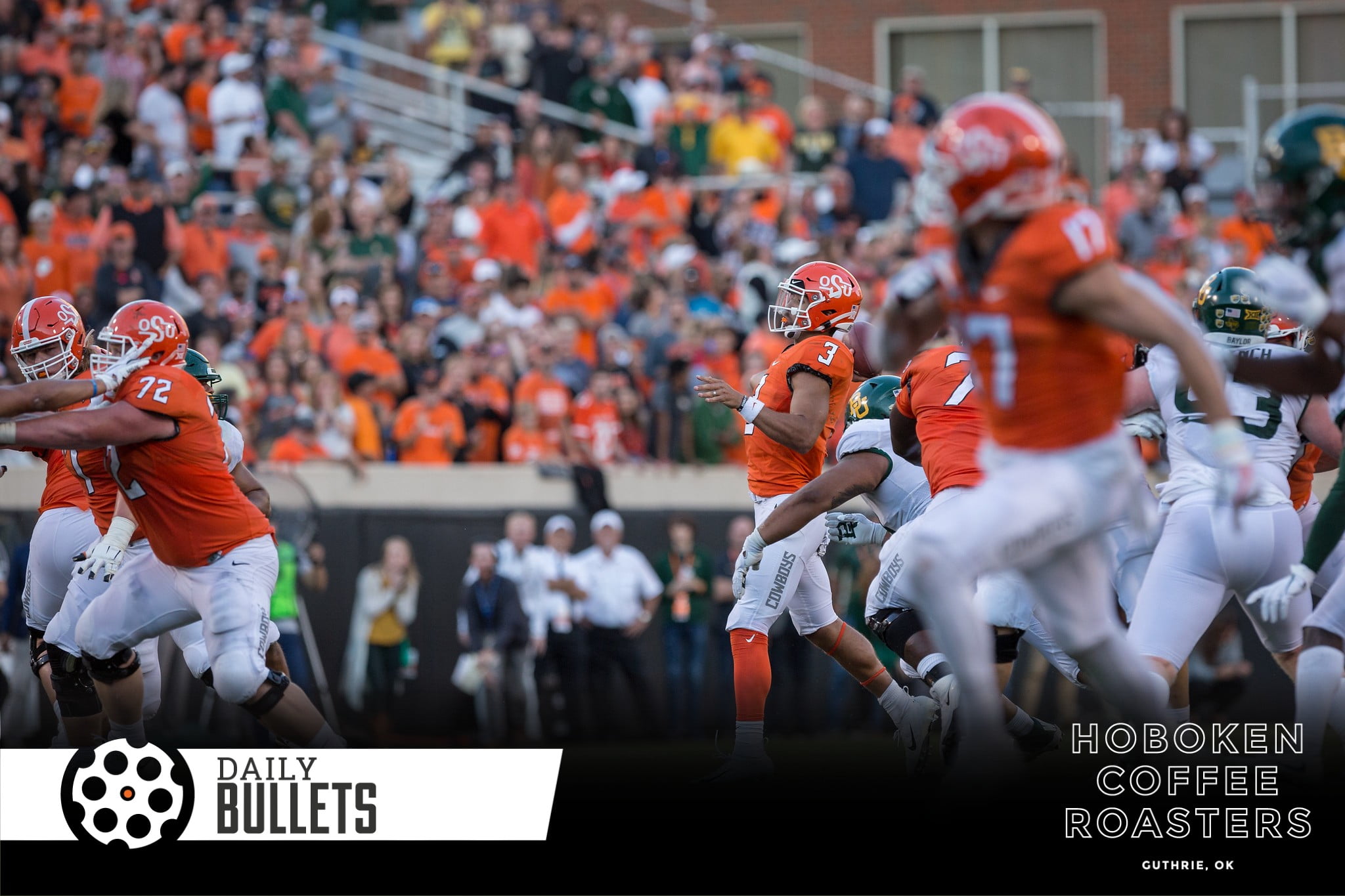 Working on finding something other than football to obsess over this fall, hook a brother up if you’ve got ideas. Thinking about OSU basketball.

• Sanders’ strength is tied to his big weakness
• Gundy losing the benefit of the doubt
• OSU’s defense: one of two strategies

• Spencer Sanders’ turnover issues are tied to what could be an incredible strength… at some point. He explains what this is.

This is such a tough lesson for a young, talented quarterback who earned four stars and a Power 5 scholarship in high school by extending and making plays. It’s what he knows. It’s who he is. [TulsaWorld]

I wasn’t in the stadium for his last turnover but the fumble looked like he bumped the ball against his own leg moving around in the pocket. Is there another Mason Rudolph-small hands conspiracy brewing about Sanders?

• My wife calls me an optimist (and she’d know) but I’m struggling with this team. Porter put it well with Ten Thoughts’ No. 10 and Boone put it here well too: Gundy is losing the benefit of the doubt.

The game was closer than the final 45-27 score would lead you to believe, but does it really even matter? Baylor did whatever it wanted down the stretch to wrangle the win away and spoil OSU’s homecoming. This was just the latest example in a long line of recent letdowns at home as a favorite. It’s no longer a surprise; it’s a trend. [PFB]

#okstate as a home favorite …

When something goes from an aberration to a trend, it’s hard to sit tight and be hopeful as a fan. I’ll still advocate for it (as it’s a less miserable existence) but the thought that “hey, OSU is probably going to pull this out regardless of how this seems” is done for now.

• Mike Gundy had some thoughts before the season on Big 12 defenses and two general buckets you can put them into.

“You know, there’s really two ways in our league. You either gotta defend the quarterback, width and length, or you gotta go get him. If you play traditional, it’s pretty difficult, because the schemes we use in this league are built to find seams and stuff and defenses and quarterbacks are too good. So, you would have to ask these defensive coordinators but, either you better drop back and try to defend him or you better go after him and try to pressure him.”

By “drop back and try to defend him” Gundy meant the various drop eight schemes like the inverted Tampa 2 scheme introduced by Iowa State. [Concerning Sports]

OSU hires Jim Knowles and they’re clearly going for the latter – “gotta go get him”. Listening to Gundy’s post-game presser, defensively the comments were about how the pressure just didn’t land enough.

On that note, I’ve been a fan of the tackling of Amen Ogbongbemiga and Malcolm Rodriguez this year. But if your whole scheme depends on a heat-seeking-missile that connects with a quarterback, is a Calvin Bundage-type the answer?

It’s a moot point concerning CB but I think your personnel (and ultimately, recruiting) has to be tailored to this strategy or you deviate to another option.

• Tramel has the Pokes as the No. 6 team in the Big 12 and I think he’s dead on – it’s wild to think there’s four teams worse after OSU lost to 1-3 Texas Tech

• Could you imagine Jelani running full-speed at you with the option to pitch to Chuba?

🚨🚨🚨 THE SAINTS RAN A FULLBACK OPTION TO TAYSOM HILL 🚨🚨🚨 pic.twitter.com/q8JVxXU27F

• This Polynesian defensive tackle from Alaska playing high school football in Oklahoma sounds like someone the Pokes should check out (bales hay, plays multiple sports)

• I like this idea of living in two-year increments
• Some gems in here – habits of Nick Foles, Nick Offerman, Tony Hawk, and Malcolm Gladwell (and more) for their perceived success
• Ten relationships (people) should have was great – let me know if you know a good butcher in Tulsa!