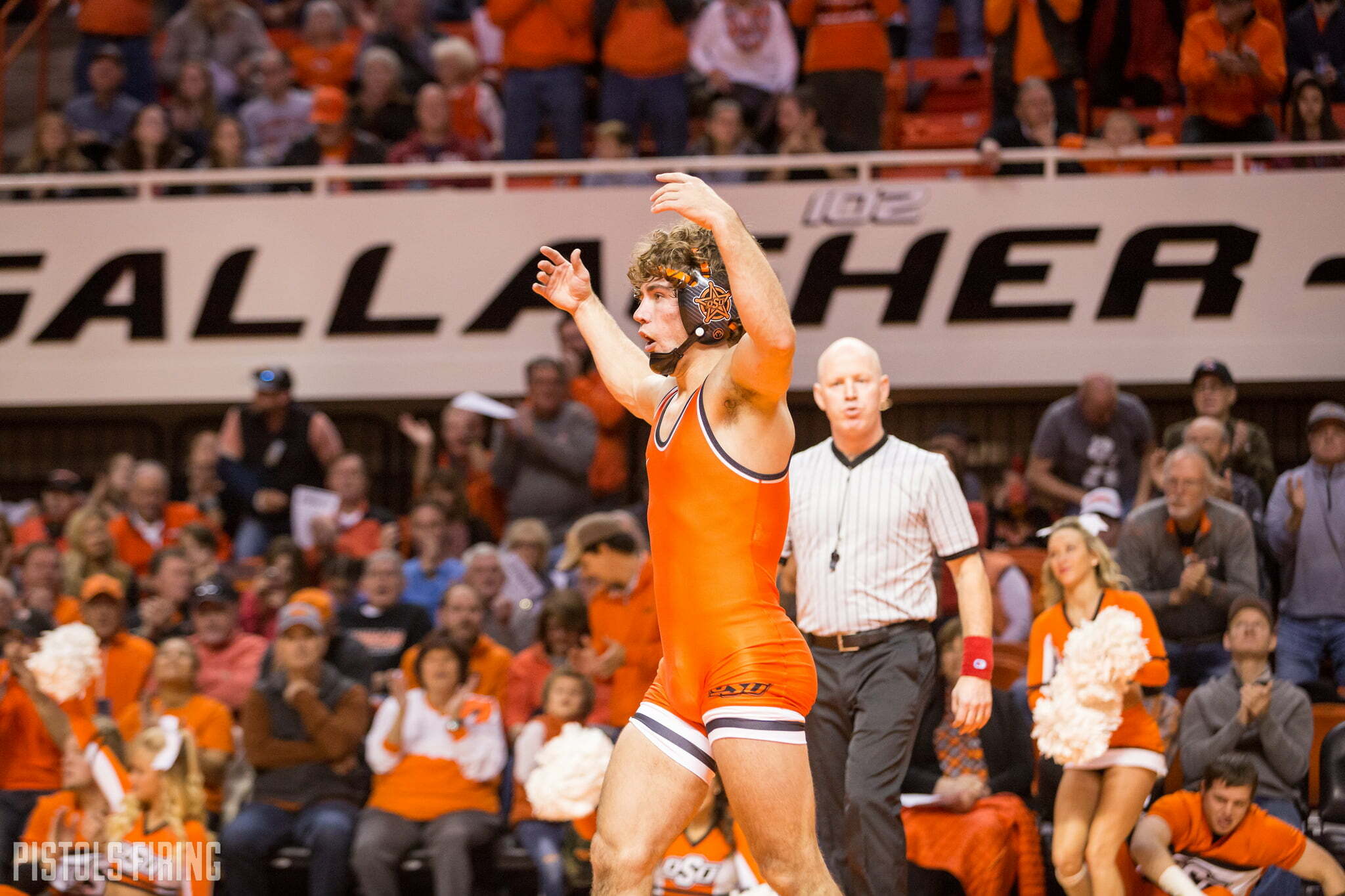 The Cowboy wrestling team went to a nearly packed house at Rutgers on Sunday and got a win over a very good Rutgers team. It did not play out how anyone would’ve projected.

One of the most built-up matches in recent history ended with a win for the Cowboys, but also with a lot of controversy. The end of the big matchup, Daton Fix vs. Nick Suriano, consisted of an incredible amount of time reviewing locked hands calls and ended up being decided on a controversial hands to the face call on Nick Suriano in overtime.

On their feet neither were able to gain much steam and get anything going. Both went for it in their rides and both had locked hands calls reviewed. Those reviews took a very long time confusing/frustrating and upsetting fans/wrestlers/coaches on each side. Ultimately no locked hands calls were given and the match ended up in a second sudden victory overtime. In that OT a hands to the face call was made on Nick Suriano and Daton Fix won 3-2.

For those unfamiliar with the rule here it is. I do think it was called correctly. I don’t necessarily like the rule and really hate that it decided a big match like that. But ultimately Suriano did put his hands to Daton’s face.

Either way it is good for Fix to walk away with a win there and I really only see two potential tests remaining for him prior to the NCAA tournament. One is against Austin Desanto in the Iowa dual and the other is  vs. defending NCAA champion Seth Gross at the Big 12 tournament, though Gross has been out most of the season. Daton’s now in a solid spot to get the top seed if he can win those.

Kaden Gfeller vs. second ranked Anthony Ashnault was a very good match. The wind was sucked out of the building after thirty minutes of reviews during Fix/Suriano, but Kaden Gfeller continues to wrestle exciting matches night in and night out. Kaden’s undersized at 149 and it shows, but he picked up the first take-down creating a back and forth match that ended with a 10-7 win for Ashnault. It was tied 6-6 going into the final period and Ashnault got an escape and take down that ended up as the difference in the match. Then there was this exchange at the end.

The exchange that got team points taken from both teams. pic.twitter.com/LLqDHPox5l

It all gets lost in the controversy of the Fix/Suriano match, but OSU ultimately had a pretty good showing here. They went out in front of a tough crowd of almost 10,000 people and only walked away with only two losses, both of which Rutgers was favored in. They didn’t get as much bonus as they have been, but against a well coached team in a tough environment, with a lot of guys hurt, they performed well.