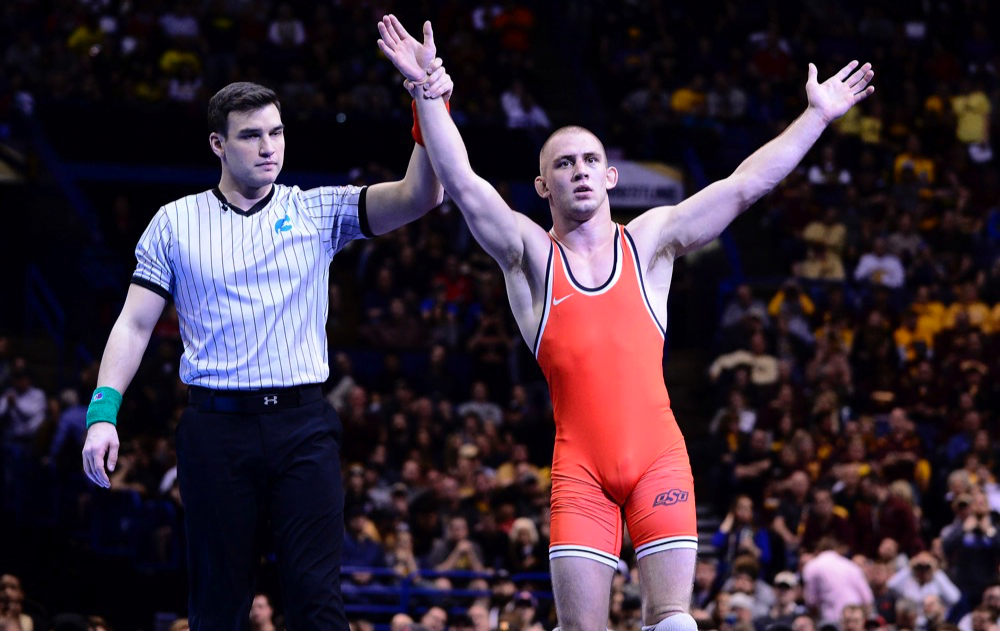 Heil was OSU’s only national champion, although it did have a school record-tying eight All-Americans.

Heil beat George DiCamillo of Virginia, 6-3 in the finals.

“I don’t really look at it as defending the title,” Heil said. “A lot of guys’ dreams are to win a national championship. I just had the opportunity to win a second, and I’m blessed for that.”

“I don’t believe that I’m the face of OSU. (Head coach) John Smith will forever be the face of Oklahoma State. He’s just got eight All-Americans to back him up. Even then you’ve got a whole team of guys who are in the stands or back home who couldn’t make it.

That’s OSU. I couldn’t be more thankful for the guys that are — to push me every day, to help me win my championship. It’s those guys who are most important to this program more than anything. They put their bodies on the line every day to give us the opportunity for these type of situations and it was a great tournament.”

As for next year when OSU will once again chase that recently-elusive national title, six returning All-Americans and a national champ will help.

“It’s been a great year, and we capped it off with a champion,” Smith said. “That’s important to have an NCAA champion back in your room (next year), along with six All-Americans. You wish you could do a few things differently, but you remember we made some great efforts to win some tough, tough bouts for some of those guys to become All-Americans.

“Tonight with Dean, it was his style, just from the standpoint of when that match started, him getting that first-period takedown, getting a hard ride on him and building almost 50 seconds of riding time. That was an important part of the way that match played out.”

Forget about the basketball drama @MeanDeanHeil IS WRESTLING FOR A NATIONAL CHAMPIONSHIP TONIGHT! GO POKES ??????

“Penn State had an unbelievable tournament,” said Heil who went a perfect 32-0 this year. He’s now 64-1 in the last two years.

“I’m very happy for it. But I still would have liked to have won that national championship. And with six returning All-Americans going into next year, I think five or six, you best believe we’re going to be coming back for the title next year.”