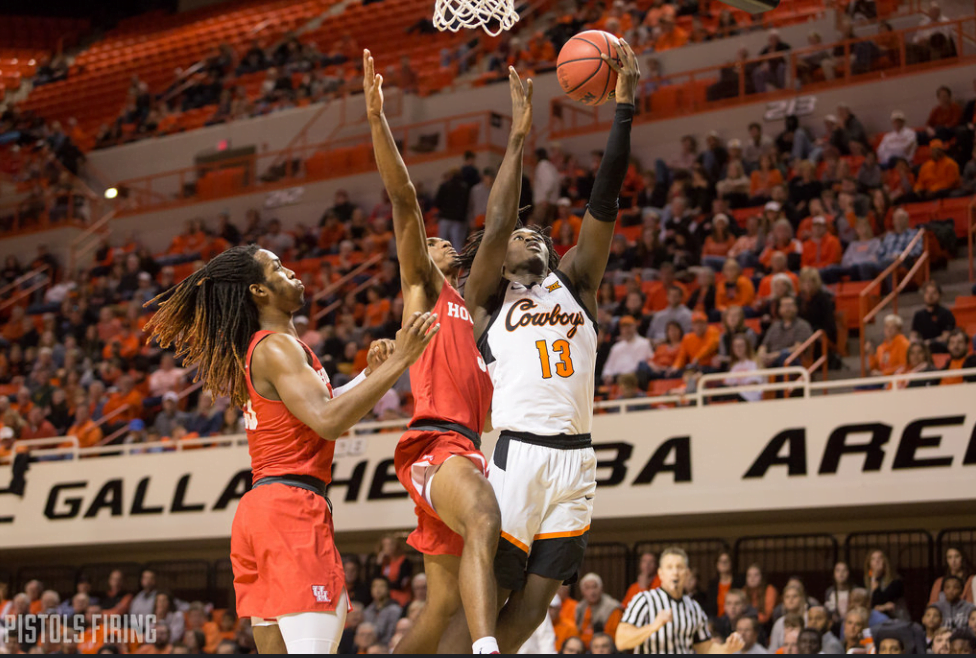 It was apparent from the exhibition contest against Ouachita Baptist to kick-off this season that Oklahoma State felt comfortable letting their 6-4, 210-pound point guard operate out of the post.

Well, in yesterday’s 63 – 53 loss to the Houston Cougars, we saw OSU go to Ice down low early and often, and they found a great deal of success working the young point guard on the block. Marshall Scott did a great job discussing Likekele’s work operating out of the low post in his Five Thoughts, but I wanted to expand upon this more below.

Not even a minute into yesterday’s game, the Pokes used their motion offense to isolate Likelele on the low block against Galen Robinson, the smaller UH defender at 6-1, 190 pounds.

In the clip above, you see Ice pass to Cam McGriff coming to the top of the key off a Lindy Waters screen. Likekele then cuts to the basket off a Yor Anei screen, but continues his cut through the lane to the opposite block. McGriff passes to Waters on the wing as Ice makes his cut and then Waters dumps it inside to the Cowboy point guard on the low block. Likekele goes up strong and is able to draw the foul inside and then sinks his two free throws.

The Pokes go to Likekele inside again a couple of minutes later. In the following video you see Ice is still matched up with the smaller Robinson.

The Pokes clear out the lane in the image below with three players on the perimeter and Anei on the opposite elbow. This provides Ice with space inside to operate and forces the Cougar defenders to either over help down low or leave Robinson on an island guarding the taller and stronger OSU guard. 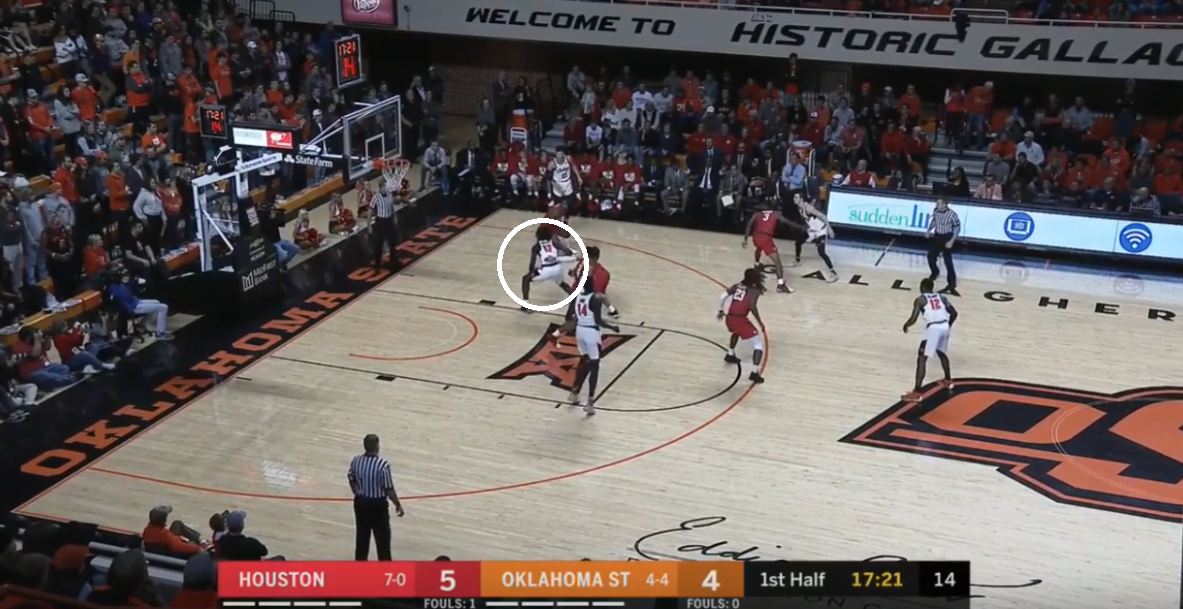 Robinson fronts Likekele and tries to deflect the entry pass, but his attempt is unsuccessful. Ice makes a quick move to the hoop as the Houston help defenders aren’t able to get there in time and he converts an easy layup.

Oklahoma State was having so much success posting up their young point man early on, they even went to him inside on an out of bounds set.

In the above clip, Thomas Dziagwa throws his initial pass to Waters who is drifting out towards the three-point line. Coach Mike Boynton has Duncan Demuth in one corner and McGriff in the other.

This leaves Likekele and Robinson one on one down low. The closest help defender is Dizzy’s man, but as Dizzy runs towards a screen set by Demuth, his defender follows him and there is now no one close enough to help Robinson. Ice lays it in and then hits the Russell Westbrook “rock the baby” celebration on his way back down the court.

In the second half, Houston started bringing over extra help when Likelele caught the ball inside. However, Ice didn’t force up a shot, as you see below, but instead found the open man and showed that he can facilitate out of the low block as well.

The Cougars continued to make adjustments in the second half and sent some different defenders at Ice, and the Cowboys eventually went away from this as Houston’s lead began to increase. That being said, I think this is something the Cowboys can continue to utilize through the rest of the season as there won’t be many opposing guards who can compete with Ice’s size and strength.

The Arlington, Texas native ended the day with 16 points, on 6 of 9 shooting, and tacked on 4 assists, 4 rebounds, 2 steals and only 1 turnover. He’s continued to show that he’s extremely mature for a true freshman and can handle the 25.3 minutes per game he’s been asked to play so far this year.