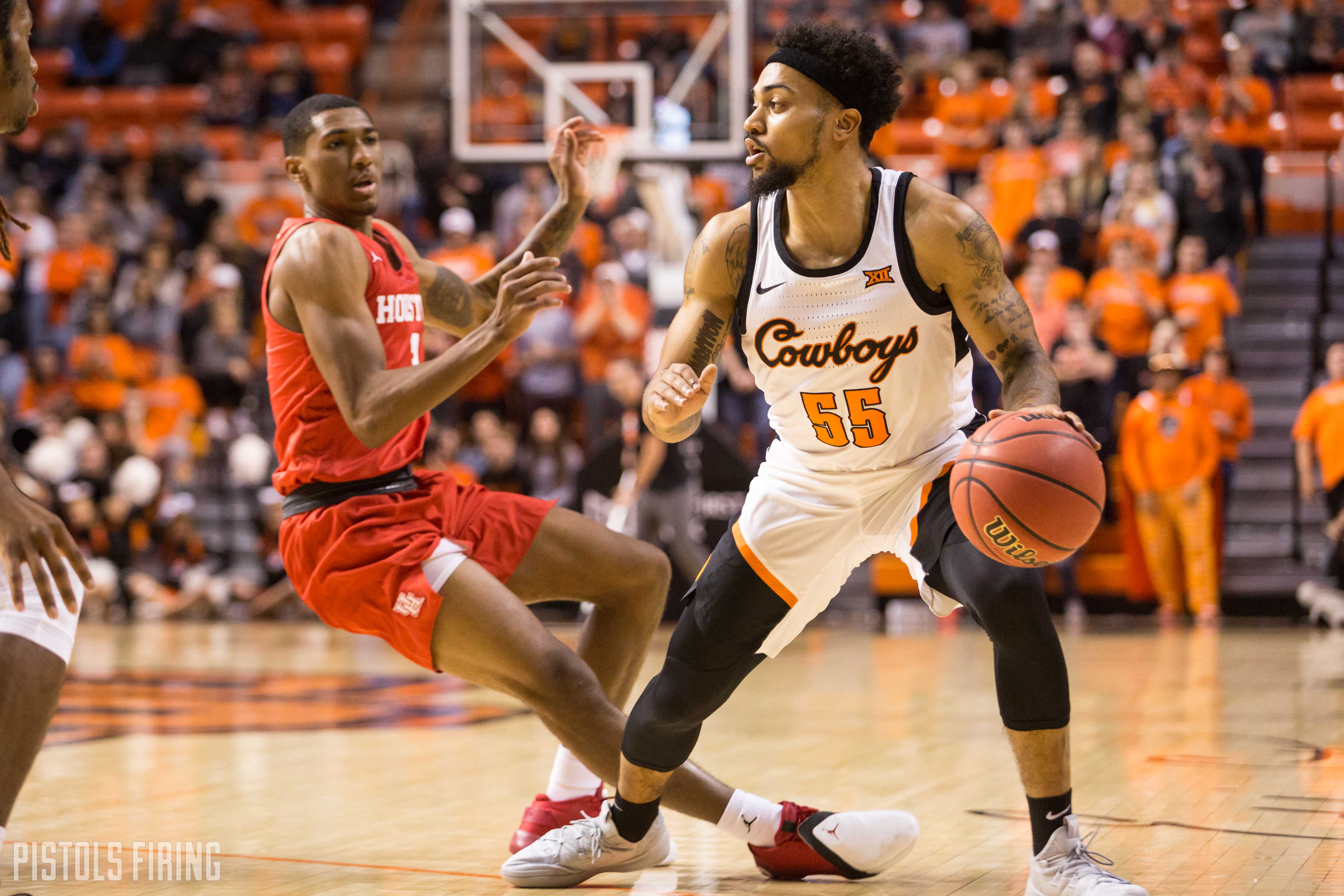 At times it looked as if Houston would leave Stillwater with its first loss of the season, but the Cowboys couldn’t put Houston away.

The Cougars topped Oklahoma State 63-53 in Gallagher-Iba Arena on Saturday off the back of 36 points from 3-pointers. Armoni Brooks led the game in scoring with 23 points, including seven made triples on 13 attempts.

The loss marks the third straight for the Cowboys, who are now 4-5 on the season. OSU has the week off before meeting Nebraska in Sioux Falls, South Dakota, on Dec. 16. Here are some thoughts from the Cowboys’ game against Houston.

A lot of the Cougars offense involved a guard driving to the basket, forcing help and dishing to a teammate for an open shot.

It resulted in Houston shooting 34 3-pointers. The Cougars made 12 of them, meaning just under half of their points came from deep. The simplest way to stop a drive and kick is to stop the drive, meaning playing better on-ball defense, which sounds like a simple fix but fighting through screens and remaining in front of the athleticism Houston proved difficult.

Another way to stop it is helping the helper, meaning when one defender leaves his man to stop the ball, someone picks up his defender and so on and so forth. This is where Houston’s experience of four upperclassmen starters where able to make extra pass after extra pass to keep the Cowboys chasing.

Isaac Likekele’s showed another of his skills against Houston in his post work.

At 6-foot-4, Likekele isn’t an average-sized point guard. A couple times Saturday, Likekele would bring the ball down the floor, pass to someone of the perimeter and proceed to eat his smaller defender on the block. Houston point guard Galen Robinson, who is 6-1, was on Likekele for much of the night and here is how that went for him.

Likekele, a freshman, ended the game with a team-high 16 points on 6-for-9 shooting. He also had four rebounds and a team-high four assists with only one turnover.

The Cameron McGriff and Yor Anei combo has fallen on hard times in OSU’s past few games.

Foul trouble has been much of the story with the two in the Cowboys’ losses to Tulsa and Minnesota. Saturday, McGriff was able to stay out of foul trouble, but it just wasn’t his night offensively. McGriff finished with seven points on 2-of-10 shooting. His offensive struggles were put into a snapshot late in the game when he went up for a dunk attempt only to get rim stuffed.

There is a saying in basketball something along the lines of, “You can’t always control if your shots go down, but you can always control your hustle.” McGriff did a nice job of doing the things he could control, ripping down a game-high nine rebounds and having only one turnover.

Although Anei had a productive night, it was again slowed because of foul trouble. Anei played only five minutes in the first half after picking up two early fouls. He ended the first half with no points, no rebounds, no assists and a turnover. With Anei off the court in the first half, Houston was plus-10.

In the second half, Anei picked up another early foul, but stayed in. His final line was six points on 3-for-4 shooting to go with two boards, two blocks and an assist in 19 minutes, a low among the game’s starters.

For the time being, McGriff and Anei are well ahead the Cowboys’ other options in the post. Duncan Demuth played 11 minutes Saturday where he finished a team high +1, but he doesn’t add much offensively yet, as he has scored only 11 points in 125 minutes of action this season.

Maurice Calloo played four minutes against Houston, he got two rebounds but was 0-for-2 from the field with another airball from 3-point range. Calloo is 1-for-13 from deep this season. Saturday made for the second straight game Kentrevious Jones didn’t check in.

Michael Weathers has a team-high 28 turnovers so far this season.

He had four against Houston in a game where he scored five points. On the year, he is averaging a turnover about every six minutes he is on the floor. A lot of it can be attributed with Weathers’ fast-paced style of play. He seems quite confident in most things he does out there which sometimes can turn to over confidence as he tries to squeeze a ball into a tight space.

The Cowboys past three games have all involved thwarted comeback attempts.

Against Minnesota, OSU cut an 18-point second half lead to four before running out of gas and losing by seven. Tulsa led the Cowboys by as many as 12 in the second half Wednesday, and OSU cut it to one in the game’s final seconds.

Against Houston, the Cowboys went into the second half trailing, only to pull on the plus side for a moment before a Houston run put the Cowboys behind for good. The Cowboys were down six entering the second half, and with 17:24 left, OSU had a one-point lead off a Likekele 3-pointer. The celebrations were short-lived as Houston’s Armoni Brooks answered with a 3 on the Cougars’ next possession.

So yes, OSU is losing games, but the Cowboys are right there, and at some point, they’ll surely finish one of these comebacks off.