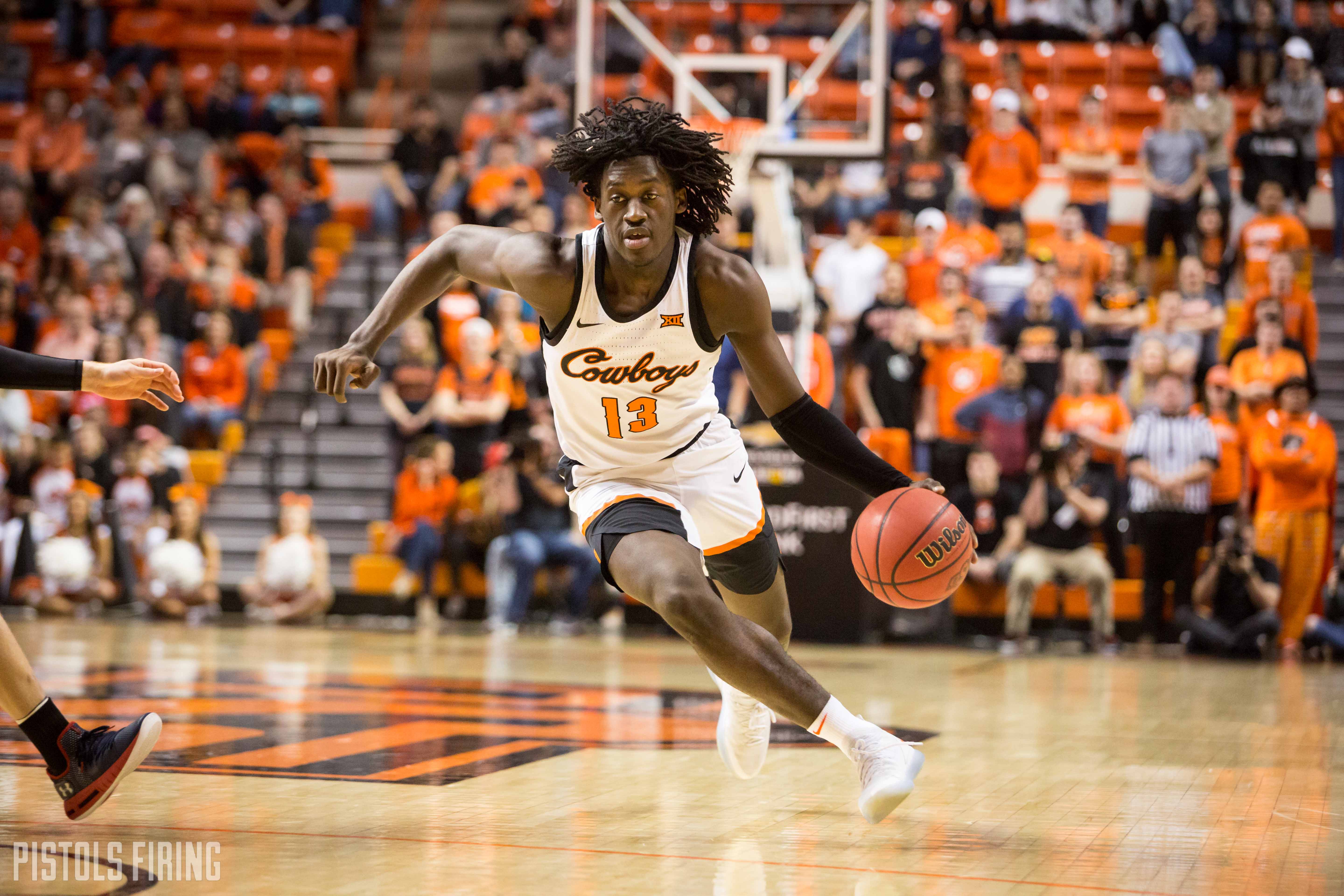 There were a lot of positive takeaways and impressive performances from Oklahoma State’s 74 – 70 victory over the South Carolina Gamecocks earlier today. Whether it was Cam McGriff’s high-flying dunks, Thomas Dziagwa’s sharp shooting or Lindy Waters’ playmaking ability, there’s a lot to talk about after this Big 12/SEC Challenge victory. However, something else piqued my interest in this game … the play of Cowboy freshman point guard Isaac Likekele.

After an incredible performance in the Pokes’ recent victory over West Virginia, where he scored 23 points on 7 of 10 shooting, grabbed 9 rebounds and had 3 assists, all while not turning the ball over, the young point guard had a stretch of three tough games. In the three games following the win over WVU, Ice had a combined total of 9 points on 4 of 19 shooting (21.1 percent) and 7 turnovers. His play in those contests had made me start to wonder if he could be the point guard for the Cowboys moving forward into the next several seasons if they have hopes of being Big 12 contenders.

Well Ice showed that he has the capability to bounce back from a few subpar performances and once again be the facilitator and playmaker that he’s shown to be at times this year. The Arlington native filled up the stat sheet on Saturday, finishing with 7 points, 6 assists, 3 rebounds and 3 steals, while assuming the role of primary ball handler for OSU.

On offense, he showed his ability to get to the rim off the dribble in isolation situations, as you see below.

He also found the open man when running the offense out of the halfcourt, as you see him drive and dish to Yor Anei after Anei’s man comes over to help stop Ice’s penetration.

Additionally, when South Carolina brought full court pressure, Ice looked very poised and was able to get through the press and find the open man. Like on this alley-oop to McGriff.

Ice’s ability to grab defensive rebounds and push the ball up the floor, along with creating turnovers and quickly getting the ball down the court on the break are huge for this Cowboy team that excels when they can run. You see a perfect example of this in the following video.

Likekele has been inconsistent in terms of his game to game play this season, but this is to be expected of a true freshman point guard being asked to handle this much responsibility. I think he has shown he’s capable of being a long-term guard option for Oklahoma State and has the talent to lead a Big 12 contending team, which I think OSU will be here in a couple of years.

In addition, when the Pokes get more ball handler depth, I think Ice will raise some eyebrows with his ability to play on offense off the ball. He’s not a spot-up shooter, but his size to post up smaller guards and quickness and finishing ability on cuts to the basket make him a lethal option in that regard as well.