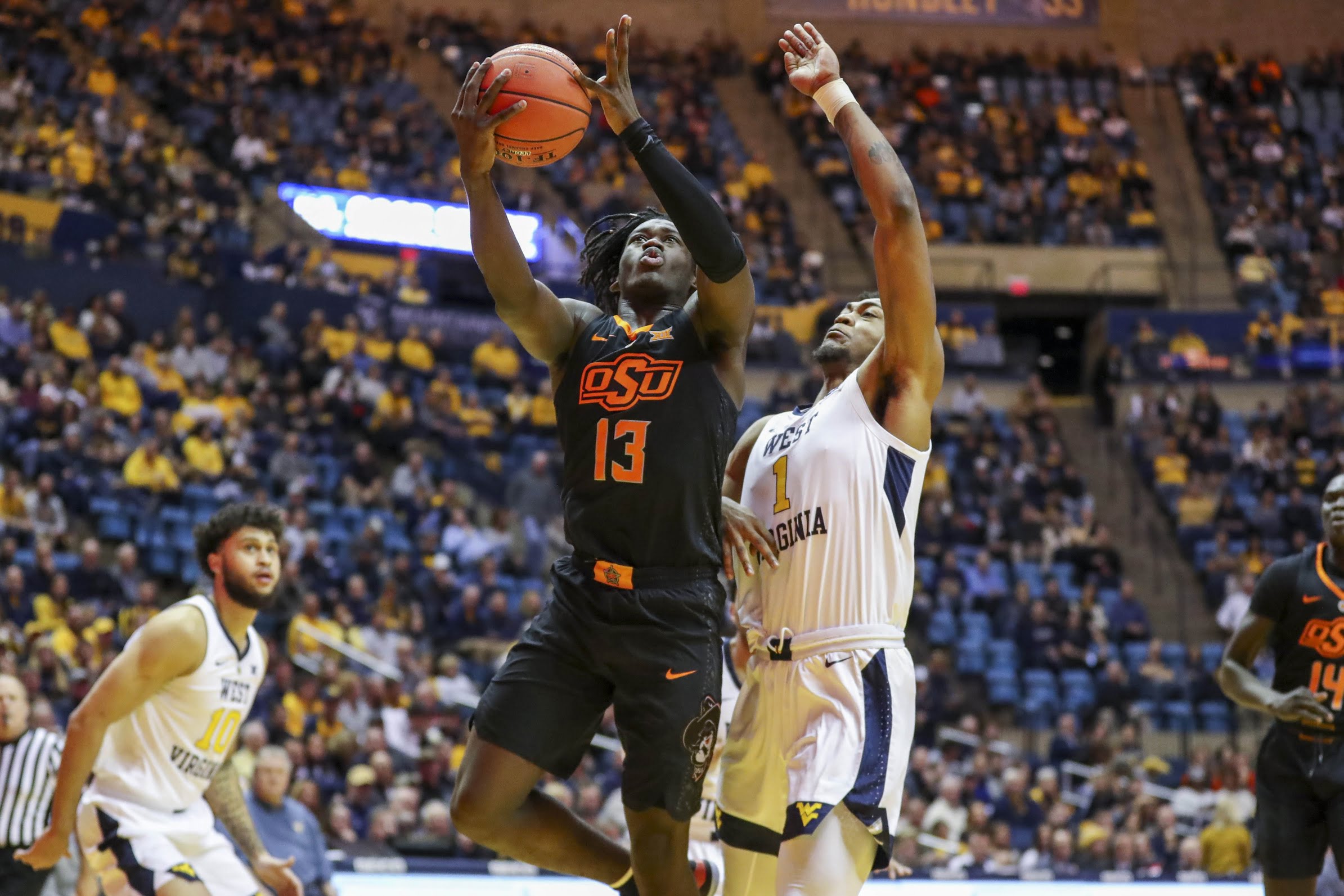 Freshman point guard Isaac Likekele was the star of Oklahoma State’s 85 – 77 victory over West Virginia this afternoon. Ice filled up the stat sheet with 23 points (7 of 10 from the field), 9 rebounds, 3 assists and 1 steal with no turnovers. After scoring just 6 points in the first half, Likekele took over the bucket-getting duties for the Pokes in the final 20 minutes by tallying 17 points on a perfect 5 of 5 shooting. Below I’ll dive into all the ways the young point man contributed in OSU’s road win in Morgantown.

Even though Bob Huggins’ team isn’t forcing as many turnovers with the press as they are accustomed to, they are still running it about half the time on defense. When they pressed the Cowboys on Saturday, Likekele did an incredible job as the primary ball handler in breaking through this West Virginia defense. He was even able to break the press completely by himself at times, and as you see below, take the ball coast-to-coast for a bucket.

In addition to breaking the press, Ice also did a great job scoring in isolation. Mike Boynton likes to spread the floor out and let Michael Weathers go to work, but we haven’t seen it run as much with Likekele. However, after Weathers left the game early due to an injury, Ice showed he has the ball handling and finishing ability to be a factor in clear outs.

In the following video the Pokes start out with a Horns set, which has both post players (Cam McGriff and Yor Anei) up near the top of the key looking to set a screen for the ball handler Lindy Waters, while Likekele and Dziagwa are spread out on the wings. Ice flashes in front of Anei and McGriff and takes the bounce pass from Waters, as Dizzy cuts across to the other wing, taking his defender with him. With Anei, McGriff and Waters above the arc, and Dizzy on the opposite side of the floor, the Cowboys have cleared out space for Ice to take his man to the hoop.

Along with making plays off the dribble, the Arlington, Texas native also did a fantastic job of moving without the basketball. In the next clip, you can see Ice realize his defender is playing a little too high, and with Kentrevious Jones and his defender up near the top of the key, no one is protecting the paint. Likekele brings his defender down towards the 3-point arc, then makes a move back towards halfcourt, and as his defender takes a step towards him, he darts to the hoop. Big Kent catches Ice’s man with a screen as Lindy Waters makes a beautiful pass and Likekele finishes at the rim.

He does another good job of faking out his defender in the following video. As McGriff brings the ball up the floor, Likekele runs toward McGriff like he’s going to come around and take a handoff from him. But he instead plants before he reaches the junior forward and cuts back to the basket. Cam makes the pass and Ice finishes with an emphatic slam.

It wasn’t just scoring either, Ice had a nice day facilitating as well. Likekele managed to play 35 minutes for the Cowboys as their primary ballhandler and didn’t turn the ball over one time. Coming into today’s contest, he was averaging 2.3 turnovers per game in 24.5 minutes per game. The fact that he played over 10 more minutes than his season average and didn’t turn the ball over once is pretty impressive.

In addition, he was able to rack up three assists for the Cowboys. They weren’t just any assists either, Ice put his teammates in positions to convert good looks. Here you see him find Maurice Calloo in transition for the easy bucket at the rim.

In this next video Ice dribbles up the floor and penetrates into the middle of the defense, causing two defenders to collapse on him. He then kicks it back to the trailing Dziagwa for the open 3.

Being only a freshman, Likekele’s poise and court vision as the primary ballhandler is absolutely outstanding. Ice has shown he’s able to bounce back from poor plays or poor overall performances and really be a key contributor for this OSU basketball team.

However, it wasn’t just on the offensive end that Likekele made his presence felt. He finished the game with 9 defensive rebounds and 1 steal. Ice does an excellent job of using his 6-4, 210-pound frame to box his man out and snag boards. You can see a perfect example of this in the clip below.

Along with pulling down rebounds on the defensive end, he’s also showcased his skills as both an on-ball and help side defender for the Pokes.

Likekele has displayed the ability to get it done on both ends of the floor for the Cowboys, and I’m really excited to watch him continue to improve throughout this season, as well as the rest of his Oklahoma State career.