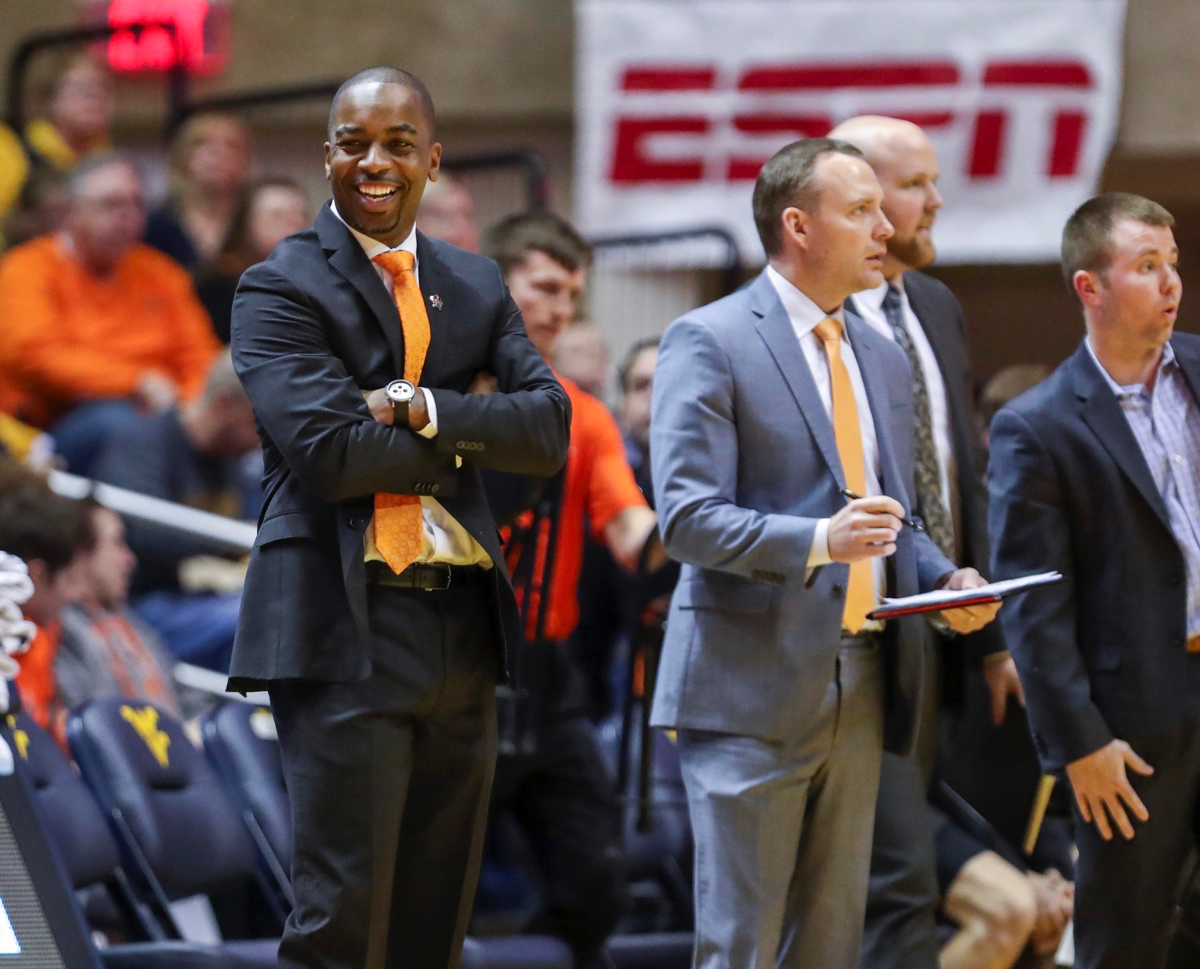 For the third straight year in Morgantown, OSU downed West Virginia on Saturday, 85-77. The Pokes evened their Big 12 record at 2-2 and their overall record at 8-8 and sent the Mountaineers even further into the conference cellar at 0-4.

It wasn’t pretty at first, but the second half was a showcase of what could be in the second half of the season and the rest of the Mike Boynton era. The Pokes rode a career day on the road from freshman Isaac Likekele, who had 23 points, 9 rebounds and 3 assists and more or less dominated the second half with 17 of his points coming in that period on 5-of-5 shooting.

Cam McGriff chipped in 16 points and 10 boards while Curtis Jones, who had 12 points at the break, finished with 15 on 3-of-6 shooting from beyond the arc. On the flip side, OSU limited a short-handed WVU group to 21 percent from 3-point range and genuinely looked like the better, hungrier, more in-control team.

Let’s get to five thoughts on a strong win for the Cowboys.

If I’m looking at these numbers up front, I’m just gonna say it, there is no way OSU is winning this game. WVU dominated on the offensive glass, destroyed OSU on second chance points and made up for a lack of efficiency by taking 67 shots to OSU’s 57.

It’s easy to see why, too. OSU’s bigs are essentially: Cam McGriff and Yor Anei (when he’s not in foul trouble) and pray. They were forced to play Kentrevious Jones for stretches on Saturday (more on him in a minute), but it was just too easy on the interior for much of the game for the Mountaineers.

On the plus side, OSU’s offense was effective on the inside against West Virginia. They were able to score 28 points in the paint (it felt like Ice had 25 of them) and attacked when many college teams (and OSU teams and Boynton teams) would have settled for deep pulls (more on this in a minute, too).

A dude. He owned the second half. What I loved about it is that the rest of the team followed his lead, took on his personality, eschewed 3s for 2s and got to the line 22 times in the last 20 minutes. He was the catalyst, though, and maybe this is the spark to get him going for the rest of the year after six straight games in single digits scoring.

I know he’s not, but he seemed indefatigable on Saturday, seemed to be the guy who looked around and said, “Screw it, I’m not letting us lose this one. I’ll own it.” Marshall Scott has been correctly pointing out for the last few weeks that OSU has a bucket-getter hole in their lineup, but on Saturday Ice filled up both that deficiency and the bucket en route to his first of what I hope is many big time Big 12 Saturdays.

My favorite stat of the game? OSU took 12 shots from 3-point range in the first half and just five in the second half. With WVU on the ropes, Boynton and his Pokes realized that going for the kill meant not settling from deep. I can’t emphasize enough how few times I’ve seen this in the last eight years of covering Oklahoma State basketball!

And it worked! They got to the line repeatedly and defended their lead by attacking instead of playing like they had Cam McGriffs guarding their capture-the-flag base.

The reverse of that is that in the first half they did such a good job of moving the ball, finding the open guy and letting their shooters shoot. Not everybody was feeling it — Lindy was 1 for 8 from the field — but Dizzy and Cujo combined to shoot 60 percent from deep and OSU as a team shot the exact same from deep (47 percent) as it did from the field.

And when they shoot well from deep under Boynton, they’re pretty good. OSU is 19-6 over the past two seasons when shooting over 35 percent on 3s.

OSU has turned the ball over at least 10 times in every game except for one coming into today. That one was a 9-turnover game against OU a week ago. Today in Morgantown? They had five turnovers. That’s incredible. It’s also the second-fewest WVU has created in 291 games since the start of the 2011-12 season (Baylor had just four in 2014). I would have bet my Justin Gilbert Steelers jersey on the over of 5.5 going into this game, and I would have been down one Justin Gilbert Steelers jersey.

A college basketball lead can be a house of cards, especially on the road and especially when you’re ranked 300 in the nation in experience. I won’t say I was surprised OSU held on — because WVU isn’t great and was missing a lot — but I was surprised with the ease with which they held on. At no point did I think, “Welp, this one’s going the other way.” It’s a sign of maturity I wasn’t sure was there, and OSU looked more like a veteran home team weathering the storm (coincidentally without Weathers) than an inexperienced group of freshmen and transfers grabbing their first road win in the Big 12.

All that to say, I thought Marshall was stepping out on a limb when he predicted that OSU wouldn’t finish last in the Big 12, but I’m coming around to the idea that that might actually come true. The trick now is sustaining it. They didn’t do that last year — every time they got a big road win or beat a top-25 team, they’d lose two games they shouldn’t MIKE GUNDY ON LINE 1 — we’ll see what Boynton learned from that and if this year’s Cowboys can keep a little momentum going.

• I love when Dizzy gets fired up on the bench. He’s ranked No. 1 in the country in the “squeeze your arms together, look to the sky and holler ‘let’s gooooo!’ as loudly as possible” rankings.

• Related: The anger over deep Dizzy 3s emanating from the WVU bench was palpable and amazing, and I loved it all.

• Cam scoring off the dribble is problematic for other teams. If he’s doing that, there will be issues.

• Is this a safe space to say I like Maurice Calloo a lot? Raw? Sure. Doesn’t know what he’s doing sometimes? Yeah. But he doesn’t look like a freshman, which is actually something you can say of him, Ice and probably Yor, too.

• Do CuJo and Lindy have the same tattoo?

• WVU’s rim sounded insanely loud. Do all college rims sound like that? Have I not been properly listening to college rims for the last eight years?

• It felt like OSU got all the calls. I think the Hugs thought so, too.

When the new guy is better than you thought and hasn't even hit his stride yet but you still can't beat him. pic.twitter.com/q754YtpSXq