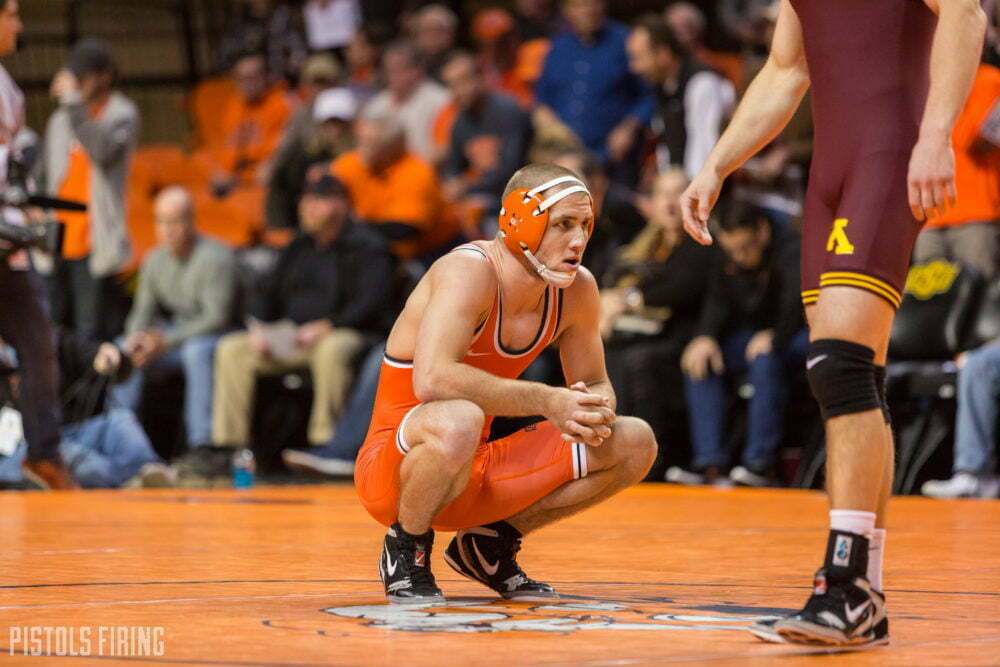 With two-time NCAA champ Dean Heil taking his first loss in 55 straight-matches to Bryce Meredith Tuesday, the buzz and debate around the wrestling world has now become who should be the No. 1 ranked guy at 141. With most of the argument centering on Heil, Meredith and true freshman standout Yianni Diakomihalis.

Heil probably won’t be ranked first when the new rankings come out but I would still argue that he’s the guy to put your money on in March.

One match isn’t indicative of some massive change of a weight class that Heil has owned for the last two years.

No one on the Cowboy roster or staff is making any excuses or bringing this up, but the elevation in Wyoming was a big factor with how the entire team wrestled Tuesday. Meredith didn’t look like he was somehow much better physically, he didn’t out scramble Heil. He didn’t look better on his feet. He didn’t even really get a strong ride in OT to beat him.

Heil just wore out late in the match at an altitude his body wasn’t adjusted to.  It takes 7-10 days for a persons body to make any adjustment to high altitude and 15-20 for it to be fully adjusted. The next time Heil matches up with the Wyoming native Meredith it will likely be at the Big 12 tournament in Tulsa. Elevation won’t be a factor there and the NCAA tournament is in Ohio and it obviously won’t impact it either. Because of that I’d expect the rematch to go similar to all the other matches between these two. Close, exciting matches but with Heil always coming out on top.

The other guy now making waves at 141 is Yianni Diakomihalis out of Cornell. The true freshman has definitely been impressive to this point. He beat Meredith already and has really looked solid. He’s wrestled on some big stages winning a few world titles, but at the end of the day in an NCAA tournament I have to go with the senior and two-time champ over the true freshman in his first time out at one of the deepest weights in the country.

There are a number of other contenders in that weight class. Joseph McKenna, a World Bronze Medalist who started out at Stanford and is now Ohio State, is someone who I’ve personally always thought was great. He never wrestles well at the NCAA tournament though. Kevin Jack from NC State is another good wrestler here. Most had pegged as No. 2 in the weight class until Meredith beat him in Reno. These guys could be competitive with Heil. But over the last two years, many thought they could knock him off but none have.

You can say what you want about Heil’s style, his close wins, his lack of bonus. But the only guy that’s found a way to knock him off was Meredith and that happened in Meredith’s hometown, off a back-to-back dual/weigh-in for OSU, and at 5,700 feet above sea level where Heil simply wore out.

One of the biggest reasons I think Heil’s the guy to put your bets on for March is that he has consistently credited doubters as a motivation. In so many ways I believe this loss benefits him as it feeds more doubt for people that want to see him lose and will give him a little something extra going forward.