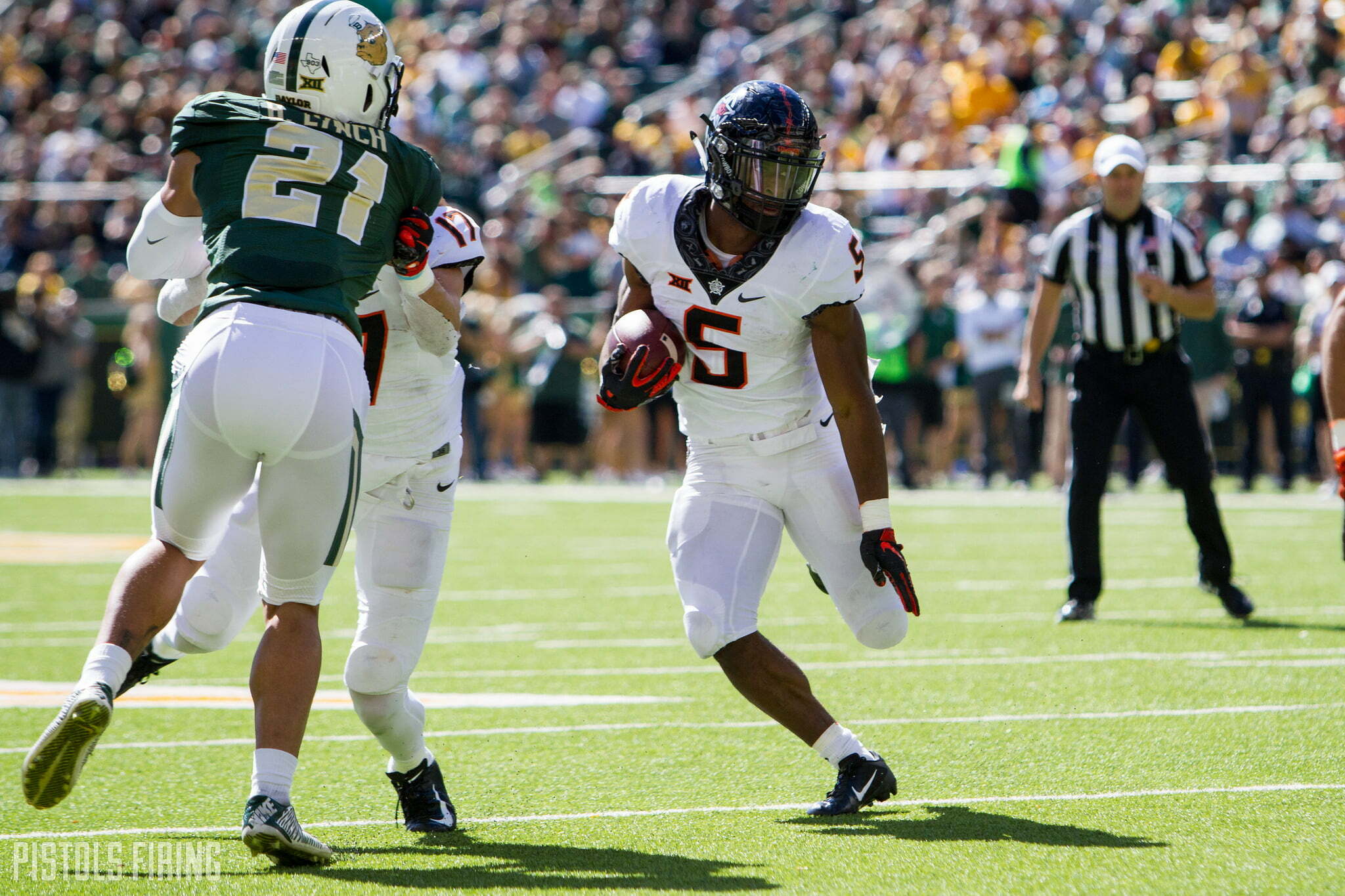 As his team prepares for their Liberty Bowl matchup with Mizzou, Oklahoma State’s leading rusher Justice Hill is singularly focuses on his upcoming career as a NFL running back.

After his season was cut short by injury on the field, it made little sense for Hill to play a bowl game, at least from a business standpoint. There is little he can add to three seasons worth of jump-cuts and stiff arms that fill up his college film.

So while we wait for that next step, let’s take a look at what some of those who cover the draft process on a larger scale are saying about the All-Big 12 tailback. Most mock drafts that have been released feature only first round projections, and Hill appears to be a Day 2 pick at best. But here’s a peek at what several of the big services think of him.

• Starting with the low end of the spectrum, Luke Easterling of USA Today‘s DraftWire  tabbed Hill as the No. 9 running back in the class behind the likes of Memphis’ Myles Gaskins and the oft-injured Rodney Anderson, Hill’s fellow preseason All-Big 12 first-teamer.

Another undersized but explosive runner, Hill is closing in on his third straight 1,000-yard season. [DraftWire]

Justice is a bit undersized for what most NFL teams look for in a stereotypical every down back, but he’s shown enough during his career to ease most doubters, in my opinion.

• Few can deny his speed and playmaking ability.

Hill’s ability to see the field, manipulate the second level and attack creases combined with his exceptional elusive traits makes him and ideal runner in a zone-heavy scheme. He offers considerable upside as a receiver and is reliable in pass pro, making him an option for every down. Hill should immediately factor into his NFL team’s rotation as a complementary back with the upside to be the focal point of the rushing attack by year three. [The Draft Network]

• CBS Sports ranks Justice as the No. 3 RB in the draft class behind Alabama’s Damien Harris and Iowa State’s David Montgomery.

• Walter Football ranked him as their No. 4 RB prospect.

There is no doubt that Hill is a natural runner and is very talented. Perhaps the best traits that set Hill apart are his first-step quickness and his burst to get to the second level of the defense. On top of his speed, Hill has good feet with cutting ability to zig zag through the defense.

He plays with good knee bend and runs behind his pads, which helps him finish runs well by falling forward. Via patience and vision, Hill lets holes develop before darting downfield. On top of his running ability, Hill is a nice outlet receiver who runs quality routes and makes catches with his hands. [Walter Football]

• Listed as the No. 2 running back according to DraftScout.com

• Matt Miller of Bleacher Report tabbed Justice as the No. 6 rusher in the class.

It’s still four months until next year’s draft, which might as well be four years in terms of making any type of predictions for the process. A lot can and will change leading up to and during the NFL Draft Combine, which Justice should get an invite to in early January.

We’ll keep you updated on Justice and the other draft-eligible Cowboys as late April approaches.